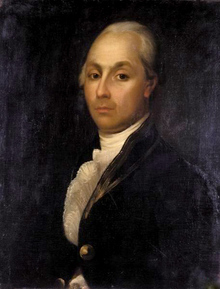 Aleksandr Nikolaevich Radishchev was the leading social critic and philosopher of the Russian Enlightenment. He has been christened by Soviet critics as “the first Russian revolutionary.” He represents one of the most perplexing issues in Russian literary history.

Radishchev was born into a landowner's family. He spent his childhood in the village of Verkhneye Ablyazovo (now Penzenskaya Oblast). His first educators were serfs. Nurse Praskovya Klementyevna and under-tutor Pyotr Mamontov taught him reading and writing. They introduced him to the world of national creativity, interest and love for which the writer preserved all his life. In 1762 Radishchev entered the elite educational institution, the Petersburg Page Corps. All subjects at the Corps were taught by one French teacher. The young pages served at the palace for the Empress and hence Radishchev was able to observe the palace atmosphere and court customs.

Radishchev graduated among the top of his class and was sent abroad, to Leipzig, to receive a special legal education. After graduation from the university, Radishchev returned home, ready, in his own words, “to sacrifice life for the benefit of the Motherland.” He expected to take part in the big work of drawing up the new legislations promised by Catherine. But instead, Radishchev had to fill the modest post of registering clerk in the Senate. Here he witnessed a long line of serf criminal cases: peasants tortured by landowners and country revolts and disorders, suppressed with “small caliber guns and a cannons.” Later he retired. 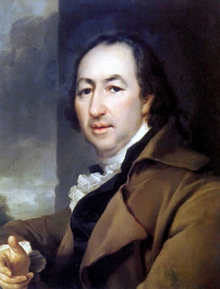 In those years Radishchev made acquaintances in literary circles and became close friends with Novikov. In his notes on the translation of a book by French philosopher-enlightener Mabli he wrote: “Autocracy is the most repugnant to the natural human condition…” After this he emphasized, that “injustice of the sovereign” gave people the right to judge and punish him as the worst criminal. He briefly expressed the idea, which he would later develop in the well-known ode “Liberty” in 1783. In “Liberty” he glorified tyrants – Broot and William Tell – and extolled and summoned “terror for kings,” calling on a revolutionary “voice” that would convert the darkness of slavery into light. At the same time “Liberty” is a hymn to the people, to their labor.

In 1789-1790, one by one, four works by Radishchev on different subjects were published: in “Life of Feodor Vasiliyevich Ushakov” he tells about life of Russian students in Leipzig; in “A Letter to a Friend” he gives a historically true estimation of the activities of Peter I; in “Conversation on What Is the Real Son of the Fatherland” he claims the right to be called a patriot should be refused to the majority of the representatives of noble society; finally in his main work, “A Journey from St. Petersburg to Moscow,” he employed the principles of natural law and the social contract to support a severe critique of Russian social institutions, particularily serfdom. Under the inspiration of Jean-Jacques 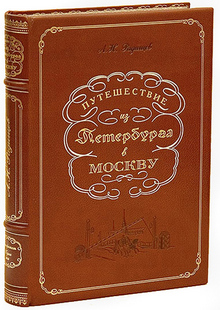 Rousseau, Voltaire, Guillaume-Thomas-François de Raynal and other French thinkers, he condemned serfdom as morally wrong and economically inefficient, criticized autocracy and attacked censorship and other practices that violated man's natural rights to freedom and equality. He advocated immediate reforms to avert revolution and called generally for enlightenment and “naturalness” in social arrangements, manners and morals.

In “A Journey from St. Petersburg to Moscow” Radishchev set a task to show modern Russian reality, hoping that his criticism of serfdom, autocracy and censorship would enlighten Catherine II. Instead, he was arrested. When Catherine read Radishchev’s work, published anonymously, she found it seditious: “...the purpose of this book is clear on every page: its author, infected and full of the French madness, is trying in every possible way to break down respect for authority… to stir up in the people indignation against their superiors and against the government.” The Empress suspected Radishchev was the author after she had read only thirty pages. She called him “a rebel worse than Pugachev” (a Cossack who lead a peasant rebellion in 1773-1774).

On 8 September 1790, after his death sentence was commuted to ten years’ hard labor in Nerchinsk, near the Chinese border, and, in turn, to ten years’ exile in the Siberian village of Ilimsk, Radishchev was taken out of the Peter and Paul fortress and started his long journey to Ilimsk. From that day until his return to his estate of Nemtsovo in July 1797, Radishchev spent nearly six years in exile. There he suffered 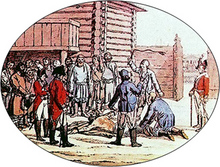 not only from the hard conditions of life in Siberia but also from being separated from his two elder sons. Vasily, thirteen, and Nikolay, twelve, were sent to Radishchev's brother Moisey in Archangelsk. This pain was only partly lessened by the fact that he was joined, in March 1791, while still in Tobolsk, by his two youngest children, Ekaterina, eight, and Pavel, seven, and by his sister-in-law Elizaveta Rubanovskaya, who all shared his years of exile in Ilimsk.

Radishchev was also cut off from his friends and from the public life he had always been so interested in. His only link with this lost world was his protector Vorontsov, who reminded Radishchev of his former public life in St. Petersburg. His superior as president of the Commerce Collegiums, Vorontsov remained loyal to the writer after Radishchev's arrest for several reasons. The first was to protect the patron relationship that he had established with his protégé; abandoning Radishchev when the writer was sent to Siberia would have been seen as failing one's obligations as a grand seigneur. Another possible explanation can be found in Vorontsov's and Radishchev's fidelity to Masonic moral ideas. Though Radishchev's connection to freemasonry remains to this day a controversial question, Tatyana Bakunina established that both the writer and his protector attended meetings

at the loge Urania in 1774-1775. Therefore, both men undoubtedly shared some Masonic values, including treating another person like one's own brother. Finally, some eighteenth-century sources suggest that Radishchev was punished for criticizing Vorontsov's enemy at court, Potemkin, in his “Journey.” If so, it would seem only natural that Vorontsov protected a man who had the same enemies.

Passing through Tobolsk to Ilimsk Radishchev wrote, "You want to know: Who am I? What am I? Where do I go? I'm the same, as I've been and will always be:
Not an animal, not a tree, not a slave, but a human being!"

In exile Radishchev continued to work. He studied the local territory and wrote a historical work devoted to Siberia.

In Siberia, Radishchev also wrote his principal philosophic work, “On Man, His Mortality and Immortality,” published posthumously. It is a close examination of the cases for and against personal immortality. In the end he rejected materialistic denials of immortality in favor of various arguments, from personal identity to conservation of force, among others. He suggested the existence of an incorporeal soul that survives the body and passes into a more perfect state. In epistemology Radishchev adopted a realistic position and accepted experience as the only basis for knowledge but maintained that in addition to sensory experience there is “rational experience” of the relationships of things and that man “feels” the existence of a Supreme Being. He also maintained that things in themselves are unknowable, asserting that thought, like the verbal expression it employs, is merely symbolic of reality. 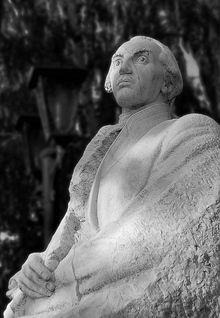 Radishchev's treatise was one of the first original philosophic works in the Russian language, and the influence his pioneering social criticism had on Aleksandr Pushkin, the Decembrists and subsequent generations of Russian reformers and revolutionaries has led to his being regarded as the father of social radicalism in Russia.

After the death of Catherine II, Radishchev was allowed to return from exile. He was pardoned by Aleksandr I in 1801. He inspired later revolutionaries, including those who instigated the Decembrist revolt. Up to the end of his life the writer lived under police supervision on his small Kaluga estate of Nemtsovo. Here he continued his literary work. In the unfinished poem “Songs, Sung During the Competitions in Honor of Ancient Slavic Gods” the author speaks about the future of his fellow-countrymen:

Oh, nation, glorious nation!
Your future descendants
Will exceed you in glory...
All barriers, all strongholds
Will be broken with a strong hand,
Will vanquish... the nature even,
- And before their mighty look,
Before their faces, lit up
By glory of victories famous,
Kings and empires will perish...

On 11 March 1801 there was another palace revolution: Paul I was killed and his son Aleksandr I acceded to the throne. Radishchev was called upon to take part in the commission to draw up new laws. But none of his projects were implemented. He realized that Aleksandr I would never reform Russia. All his precious hopes failed. His disillusion with Aleksandr I caused Radishchev’s suicide. Later Trotsky held that Radishchev’s unfinished “Historical Poem” compared by implication Aleksandr I with Caligula of Rome. Caligula too began his reign mildly and nobly, like Aleksandr I of Russia, but later became tyrannical and subjected his people to a cruel despotism. Radishchev committed suicide by drinking a fatal dose of poison.