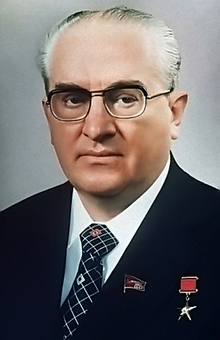 The son of a railway worker, Yury Andropov was born in a small settlement of Nagutskoye near Stavropol in southern Russia (the first and only USSR president Mikhail Gorbachev was born in the same area as well).

In his early years Yuri was a telegraph operator, film projectionist, and boatman on the Volga River before attending a technical college at Rybinsk (he even trained as a water transport engineer and worked for a time in the Rybinnsk shipyards) and, later, Petrozavodsk University. By the early 1930s Andropov was an active participant in the Komsomol.

He became an organizer for the Komsomol in the Yaroslavl region and joined the Communist Party in 1939. His superiors noticed his abilities, and, following the 1940 Soviet-Finnish war, he was made head of the Komsomol in the newly created Karelo-Finnish Soviet Socialist Republic (1940 – 1956). During World War II, he led a group of partisan fighters who operated behind Nazi lines.

After the war he worked in the local party organization. The turning point in Andropov’s career was his transfer to Moscow in 1951, where he was assigned to the party’s Secretariat staff, considered a training ground for promising young officials.

His work led to various positions in Moscow, and following Stalin's death (March 1953) Andropov was demoted to Budapest as a counselor in the Soviet Embassy, though he was later promoted to ambassador to Hungary (July 1954–March 1957). Over the next three years he watched events that led to the Hungarian Revolution of 1956. His steady stream of reports to Moscow warned of growing unrest in Hungary. He also gave his views on the strengths and weaknesses of the Hungarian leadership's position. 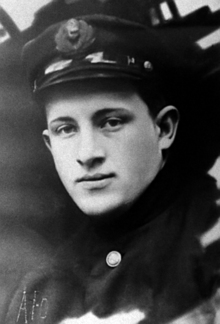 Andropov played an important role in the Soviet decision to invade Hungary in 1956 and coordinated the Soviet invasion of that country. Andropov cabled a request for Soviet military assistance to Moscow from Erno Gero, first secretary of the Hungarian Communist Party. According to Major General Bela Kiraly, former Hungarian military commander of Budapest, Andropov managed to cunningly addle the Hungarian Prime Minister Imre Nagy about Soviet military intentions, and later assured Nagy that he was safe from Soviet reprisals. During the Hungarian crisis of 1956, Andropov proved his reliability. However, Soviet tanks rolled into Budapest in November 1956 and Nagy was captured and executed in 1958.


Andropov then returned to Moscow, rising rapidly through the CPSU and government hierarchy and, in 1967, became head of the KGB. A hard-liner, he supported the 1968 invasion of Czechoslovakia and oversaw the crackdown on political dissidents such as Andrey Sakharov and  Aleksandr Solzhenitsyn. Andropov often met Mikhail Gorbachev while the latter was First CPSU Secretary for the Stavropol territory. Andropov was impressed with his work and used his considerable influence to promote Gorbachev's career.

Yury Andropov was elected to the Politburo in April 1973, and, as Soviet leader Leonid Leonid Brezhnev’s health declined in the mid to late 70s, he began to gradually position himself for succession, resigning from his KGB post in 1982. Andropov was chosen by the Communist Party Central Committee to succeed Brezhnev as General Secretary on November 12, scarcely two days after Brezhnev’s death. It was the culmination of a long, but steady, march up the Communist Party hierarchy for Andropov. He consolidated his power by becoming chairman of the Presidium of the Supreme Soviet (effectively the president) on June 16, 1983.

Head of the USSR

During his short-lived, but eventful, rule Andropov made attempts to reinvigorate the flagging USSR economy and reduce growing corruption. He initiated campaigns against rising alcoholism (a special sort of cheaper low-alcohol vodka was produced which got an informal nickname Andropovka) and struggled to increase work discipline amongst the people of Russia. These campaigns were carried out using a typically Soviet administrative approach that was reminiscent of Joseph Stalin's strong-handed reign. 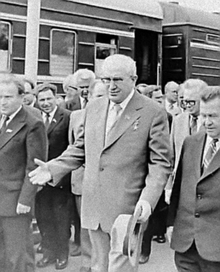 As Mikhail Gorbachev wrote in his memoirs, “First and foremost, Andropov had a brilliant and large personality, generously endowed with gifts by nature, and a true intellectual. He resolutely denounced all the features commonly associated with Brezhnevism – that is, protectionism, in-fighting and intrigues, corruption, moral turpitude, bureaucracy, disorganization and laxity.

Andropov's tough, and sometimes exaggerated, attitude to these problems instilled hope that an end would at last be put to all the outrageous practices, that those who had alienated themselves from the people would be held responsible.

Consequently his actions, though they were sometimes excessive, created hope and were considered the harbingers of general and deeper changes… He realized the need for change, yet Andropov always remained a man of his time, and was one of those who were unable to break through the barrier of old ideas and values.”

In his foreign policy, Andropov faced off against the adamantly anticommunist diplomacy of President Ronald Reagan. Relations between the United States and the Soviet Union were severely strained when Soviet pilots shot down a Korean airliner in September 1983.

Later that year, Soviet diplomats broke off negotiations concerning reductions in Intermediate Range Nuclear Forces and the Strategic Arms Reduction Talks (START). Later the United States deployed Pershing II missiles in Europe. At the time Ronald Reagan was denouncing the Soviet Union as an “evil empire” that had committed “a crime against humanity” with Yuri Andropov responding that the Reagan Administration had “finally dispelled all illusions” that it could be dealt with. 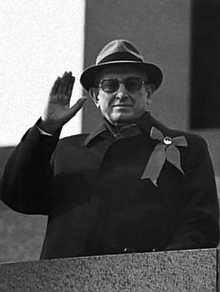 At a baser level, crude propagandistic vilification prospered: American caricatures of Andropov as a “mutant from outer space”; Soviet comparisons of Reagan to Adolf Hitler. Andropov also made little progress in the policy concerning the continuing war in Afghanistan. Still, both leaders were nominated Men of the Year by Time Magazine in 1983.


For the foreigners, Andropov always remained a puzzle because of the mystery surrounding his health and his background as a KGB chief. One of his most notable acts from the Western point of view was an unexpected response to a letter from an American schoolgirl named Samantha Smith and he invited her to the Soviet Union. Samantha actually visited the USSR and later became known as a peace activist before dying in an air crash in 1985.


Ill health overtook Yury Andropov by August 1983, and thereafter he was never seen again in public. After several months of failing health, Andropov died of kidney failure in February 1984. He was succeeded by his former rival, Konstantin Chernenko.