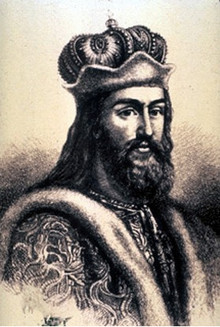 Vladimir I, Grand Prince of Kiev and of all Russia, was an outstanding political figure in ancient Russia. During his rule, Christianity was adopted in Russia. He is also known as St. Vladimir, Vladhttp://russiapedia.rt.com/admin/prominent-russians/edit/1641imir the Baptist and Vladimir the Red Sun.

Early years and struggle for power.

Vladimir I was born around 956. His father was Svyatoslav I, Grand Prince of Kiev, who died in 972. Vladimir was the youngest of three sons. According to legend, his mother Malusha was a housekeeper for Vladimir’s grandmother Olga. Despite the family’s relatively high status in the court, Malusha was a slave. As a natural son on Svyatoslav, Vladimir was considered to be his rightful heir. Vladimir spent his childhood with his grandmother Olga; by the time he was born, she was one of the first in Kievan Rus to have been baptized into the Orthodox Christianity. This proved to be of great importance later, when Vladimir had to choose a new religion for Russia.

Following Svyatoslav’s death, an internecine war broke out between his potential successors. At that time, Vladimir was Prince of Novgorod (a city in the northern part of ancient Russia). The eldest son, Svyatoslav Yaropolk, was Prince of Kiev. He was a very overbearing man who wanted to rule all of Russia. He expelled Vladimir from Novgorod, and was forced to flee to Scandinavia. There, he began to muster an army to retake the throne from Yaropolk. Vladimir returned to Russia in 979 and declared war on Yaropolk. On his way to Kiev, Vladimir also seized the town of Polotsk, where he married Yaropolk’s fiancée Rogneda against her will. 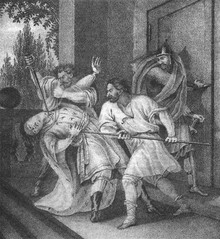 Murder of Yaropolk by Boris Chorikov

In 980, Vladimir besieged Kiev. He lured Yaropolk out, supposedly for negotiations, and then killed him. Yaropolk’s wife became a concubine in Vladimir’s harem. After Yaropolk’s death, Vladimir had no other rivals for the throne – middle brother Oleg had died in 977. He became the independent sovereign of the entire Kievan Rus.

Grand Prince of the Kievan Rus

The new Prince of Kiev took steps to move the country towards paganism. He erected a temple in the capital displaying idols of six major Slavic pagan gods. He also introduced the practice of human sacrifice. The shift towards paganism is assumed to have been a response to his rival brother Yaropolk, who was known to favor Christianity. At the time, Vladimir was a zealous pagan. He was infamous as a vindictive and bloodthirsty warrior. He was also known as a libertine, for having five wives and some 800 concubines.

Vladimir was an expert commander. During his reign, Russia's borders were well-protected. The Prince of Kiev managed to subdue hostile neighboring tribes. He also undertook a successful campaign against the Poles, Latvians and Bulgars. As a result of these campaigns, the Kievan Rus made significant territorial gains. 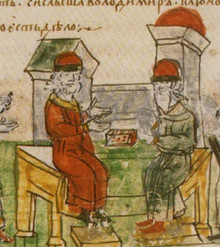 Vladimir I talking to Greek pholosopher about Christianity

But Russia’s main struggle in the second half of the 10th century was the adoption of a single, monotheistic religion. The move was intended to unite the people of the country, and strengthen the international renown of the Kievan Rus as no longer a wild, barbaric country.

According to legend, Vladimir had to choose between three religions: Christianity, Islam and Judaism. It was also important to decide what kind of Christianity was better for Russia: The so-called Latin Orthodox – Catholicism – or the Eastern Orthodox.

When neighboring nations heard about Prince Vladimir’s intention to adopt a national religion, they sent ambassadors to persuade the Prince to adopt their faith. Vladimir listened carefully to them all.

The very first messengers came from the Volga Bulgars, who had already accepted Islam. But Vladimir saw their prohibition laws as a strain on the Russian soul. The ambassadors of the Western Catholic Christians also failed, because their faith had been rejected once already by Vladimir’s ancestors. Judaism was rejected as “the religion which did not even help the Jews to keep their own land.” Vladimir finally chose Eastern Byzantine Christianity. For many decades, Russia and Byzantine had close political and commercial relations. 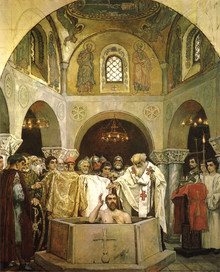 Vladimir began a military campaign in Byzantine in 988. The Prince captured Korsun (Chersonese in the modern Crimea), and demanded to marry Anna, a sister of the Byzantine Emperors Basil II and Constantine VIII, or else he would attack Constantinople. The Emperors agreed, but demanded the baptism of the Prince in return, because their sister was only to marry a man of the same religion. Vladimir agreed to the conditions. The Byzantines sent Anna to Korsun with priests. There, Vladimir and his warriors were baptized by the Bishop of Korsun. Vladimir and Anna then married according to Christian tradition.

When Vladimir returned to Kiev, he ordered the destruction of the temple’s pagan idols. On September 1, 988, Vladimir gathered the citizens of Kiev on the banks of the Dnieper River. They were all solemnly baptized. This year is considered to be the official date of the baptism of Russia. This baptism was accompanied by the establishment of the church hierarchy. Russia became a metropolis of the Patriarchate of Constantinople.

In Kiev, the baptisms passed peacefully. But in Novgorod, the second greatest city in Russia after Kiev, the people rebelled. This uprising was suppressed with troops, but the old pagan cult would continue to be practiced in Russia for centuries.

Social and political heritage of Vladimir 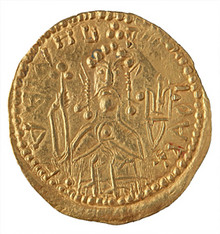 First coin of Rus: «zlatnik» of Grand Prince of Kiev Vladimir I

As a politician, Vladimir only signed laws after consulting with his Counsel. It consisted of his brigade – military commanders – and the elders – representatives of different cities. Vladimir also began minting coins, which reproduced the Byzantine designs of the era. The coins were not issued to serve economic goals, but rather political ones: The currency served as a further sign of the sovereignty of the Christian ruler.

Vladimir minted gold and silver coins. Most of the coins depicted Prince Vladimir sitting on the throne. These coins were the first issued in the territory of Kievan Rus. It also served as one of the few recorded images of Vladimir: A man with a small beard and a long mustache.

Vladimir made great contributions to the development of Russian cultural and social life. During his reign, literacy began to spread across the Kievan Rus, with Byzantines and Bulgarians as teachers. Under Vladimir, large-scale stone construction projects began, and the foundations of church art and architecture were laid.

Vladimir was also renowned for his generosity. He held feasts every Sunday for the citizens of Kiev, and even ordered his servants to deliver food and drinks to the sick and infirm. His generosity was preserved in folk epics and fairy tales, where he was immortalized as Vladimir the Kind Sun. 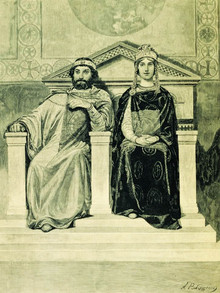 In the last years of his life, Vladimir likely intended to name his beloved son Boris as successor. His two oldest sons, Sviatopolk Turovsky and Yaroslav of Novgorod, revolted against their father in 1014. Vladimir imprisoned his elder son Svyatopolk, and was readying for war with Yaroslav when he suddenly fell ill and died on July 15, 1015.

Historians estimate that Vladimir had around 800 concubines, and a number of wives. In 995, Vladimir divided the Kievan Rus for inheritance, to be ruled among of his sons. Historians believe that this was a fatal mistake on Vladimir’s part, which led to civil war and the fragmentation of the Kievan Rus into three separate kingdoms.

Vladimir and his wife Anna were buried in Kiev. During the Mongol invasion in later centuries, the church where they were buried was destroyed, and Vladimir’s remains were lost.

Vladimir stands as a central figure in Russian history. The Orthodox Church named him "Holy" for introducing Christianity to the country. Among his people, he earned the name "Great" for his rulership.

Darya Saltykova Darya Saltykova, commonly known as Saltichikha made her infamous mark with the atrocious killings of her serfs. She was the epitome of boyar abuse of serfs in pre-reformation Russia.