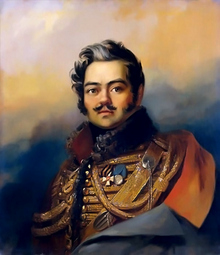 Denis Vasilyevich Davydov was a Russian poet, military historian and theorist. He was born into a noble family. His father commanded a light cavalry regiment under the great Russian commander Aleksandr Suvorov. Davydov spent his childhood in Moscow, and although he rarely saw his father, the boy was obsessed with military art from his youngest years. This obsession became even stronger after he attracted the attention of Suvorov himself. The commander saw the enthusiastic boy during an inspection of his father’s regiment and blessed him, saying that he would “win three battles.”

Davydov received an exceptional (by the standards of the time) home education. His military career started in 1801. He didn’t have the natural characteristics of a horse guardsman, being rather short, while usually only tall men were accepted into the regiment. Nevertheless he managed to struggle his way into the horse guard and became a banner-bearer in a cavalry guard regiment, and a year later received the rank of officer. He avidly studied military art and war history. He was tutored by a French major, who formerly served in the French general staff.

Denis Davydov was a versatile man, but he was especially keen on poetry. His first poems were well received in literary circles. However, his satiric fables “Head and Legs” (“Golova i nogi”) and “The River and the Mirror” (“Reka i zerkalo”) were found outrageous and invoked the discontent of Davydov’s superiors. He was discharged from the guard and transferred into a Hussars’ regiment. He quickly accommodated himself to his new status and continued to write poetry, in which he praised the swashbuckling life of a Hussar. In 1806 he was allowed back into the guard, which had then just returned from the War of the Third Coalition (the Russian-Austrian-French war of 1805). Davydov’s operational record started with his assignment as an aid-de-camp to Prince Petr Bagration, an outstanding military leader and general in the Russian-French War of 1812 (the Patriotic War), under whom Davydov took part in most of the battles of the Napoleonic Wars.

In January the following year he participated in his baptism of fire in the battle at Wolsdorf. He led the first ranks courageously and in the heat of battle, narrowly escaped imprisonment. For his courage he received his first award, the 4th class Order of Saint Vladimir. Later he fought at Preussisch Eylau (now Bagrationovsk in Russia’s Kaliningrad Region), Guttstadt (now Dobre Miasto in Poland, translated simply as “Good Town”), Deppen, Heidelberg and Friedland. The latter battle, although it saw a decisive defeat of the Russian army, earned Davydov a gold saber award with the inscription “For Courage.”

In 1808 Davydov fought in the Finnish War of 1808-1809 together with the then division commander Bagration. As part of a front-line squad he participated in a march to the North of Finland, then crossed the ice of the Gulf of Bothnia to the Åland Islands and the coast of Sweden. A year later when Bagration was appointed chief commander of the Russian army in the 1806-1812 war with Turkey, Davydov took part in major battles of that war, and another year later his courage earned him the 2nd Order of Saint Anna.

By the beginning of the 1812 Russian-French war Davydov was a lieutenant colonel commanding a battalion of the Akhtyrskiy Hussar regiment in Bagration’s Second Western Army. After Napoleon’s invasion of Russia, Davydov took part in defensive combat. Shortly prior to the Borodino Battle (7 September 1812), he asked Bagration to allow him to perform guerilla raids on the French forces’ rear areas. 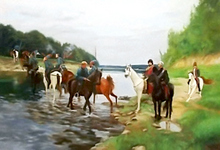 Davydov’s guerilla tactics involved avoiding outright confrontation, using surprise, changing the direction of attack and striking the enemy’s weak spots. His connection to the common folk helped the Hussar guerilla in his raids. Peasants served him as scouts and guides. The uniforms of Russian and French Hussars looked very much alike and locals at first often took Davydov’s cavalry for Frenchmen. Then Davydov ordered his men to change into peasant clothes. He himself put on simple clothes, grew a beard and wore a little icon of Saint Nicholas on his chest to look like a commoner.

Davydov’s quick success convinced commander Aleksandr Kutuzov that guerilla warfare was worth it, and he further developed it. One of Davydov’s great military feats was the operation at Lyakhovo, where he and his guerillas captured two thousand French soldiers. Davydov was never cruel; he never executed his prisoners and demanded his men to be humane to the surrendered enemy soldiers. In 1813 Davydov’s squad joined adjutant-general Ferdinand of Wintzingerode’s corps. In the beginning of the next year Davydov commanded the Akhtyrskiy Hussar regiment and stood on the frontline of commander Blücher’s Army of Silesia. For his excellent performance in battle he was promoted to major general. Davydov entered Paris at the head of the Hussar brigade.

In 1815 Davydov was appointed brigade commander in the First Dragoon Division, but the nomination disappointed him. Then he was given the Second Ranger Division, but that didn’t please him either, as he hated to lose his moustache, which was then only allowed to Hussars. After spells at various other posts he got tired of monotonous service and took a long vacation, and retired in 1823. During that period he published several works including “Essay Towards a Theory of Guerilla Warfare,” and “Diary of Guerilla Operations of 1812.” At the same time Davydov continued to write poetry.

Upon the enthronement of Emperor Nicholas I in 1825, Davydov returned to the military and went to the Caucasus where he fought in the Russo-Persian war of 1826-1828. He later left the Caucasus and stayed put in his village for several years. The Polish uprising of 1830-1831 made him return to combat action. In April 1831 he received the 1st class Order of Saint Anna for the capture of Vladimir-Volynskiy City in what is now Western Ukraine. Later he was promoted to lieutenant general and received the 2nd class Order of Saint Vladimir.

After the end of the Polish campaign Denis Davydov retired and settled in the estate of Verkhnyaya Maza, now in the Ulyanovsk Region of central Russia, which belonged to his wife Sofya Chirkova. There he continued his literary work, while bringing up his children and doing housework; he built a winery and dug out a pond. In 1839 he fell ill and died at the age of 54. He was buried on his estate.