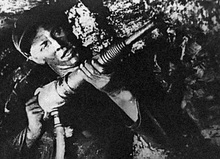 Childhood at the dawn of the USSR

The son of a peasant, Stakhanov was born in the village of Lugovaya in European Russia. As a youngster, he worked as a labourer and shepherd. He went to a village school, but his studies were sporadic, and Stakhanov later referred to himself as poorly educated. In 1927, while trying to make his way out of poverty, he began working at a mine in Eastern Ukraine, dreaming of earning enough money to buy a horse.

Meanwhile, the USSR’s industrial development was pushed along at breakneck speed and production was almost entirely shifted from consumer goods to heavy industry. Joseph Stalin’s policies of the 1930s quickly propelled the Soviet Union from an agricultural state to a major industrial powerhouse. But by 1935 it became clear that this massive investment wasn’t quite paying off – the country was badly lacking qualified specialists. The government began looking for new ways of increasing production.

The movement of productivity

On the night of August 31, 1935, it was reported that Stakhanov had mined a record 102 tonnes of coal in less than six hours (14 times his quota). This sparked the so-called Stakhanovite movement, encouraging the rise of worker productivity.

Stakhanov was hailed as a pioneer of innovative working methods and a role model for millions. He turned into a key player in a massive propaganda campaign to motivate workers. Urged to emulate his heroic example, plants and factories competed fiercely to outdo each other, while the man himself even appeared on the cover of Time magazine. Stakhanov and other “model workers” were promoted in the press, literature and film. Special Stakhanovite training schools sprang up.

Stakhanov went on to study at the Industrial Academy in Moscow, becoming a head of a mine in Kazakhstan in 1941. He later worked at the USSR’s Ministry of Coal Industry and then held various posts in the mining industry until his retirement in 1974. He was awarded some of the country’s top honours, including two Orders of Lenin, the Order of the Red Banner and numerous medals.

The validity of Stakhanov’s record has since been questioned. His widely publicised method for immensely increasing productivity was said to be no more than rationalisation of working arrangements. It was reported that Stakhanov had succeeded in his feat only because the Communist Party had pre-arranged the event to boost public morale. While Stakhanov had other workers helping him to set his record, the result was attributed to him alone.

The Stakhanovite movement eventually led to better organisation of work in the mines and on factory floors, but there was a down side to it as well. The progress of Stakhanovite enthusiasts served to push up work quotas while record-chasing often overshadowed the need for quality. Over the years the word Stakhanovets (стахановец) has turned into a derogatory term for people who are overachievers in their jobs.