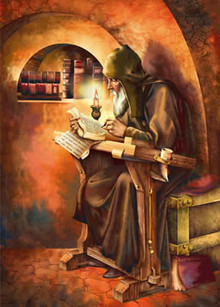 Nestor the Chronicler is considered the father of Russian history for his Primary Chronicle (otherwise known as the Tale of Bygone Years), the earliest of Eastern Slav chronicles. The monk, whose remains rest in a Kiev monastery, has also been canonized by the Russian Orthodox Church.

Little information has been preserved about Nestor. The few facts historians believe to be true are that he came to live in the Kievan Caves Monastery as a youth, and lived nearly 40 years there as a monk. He began writing the chronicles of Rus as part of his obedience service at the Monastery.

The few other details of his life are that he was commissioned with two other monks to find the relics of St. Theodosius of Kiev, the founder of the Kievan Caves Lavra. Nestor successfully completed the mission.

Apparently Nestor was one of the most educated men in late 11th- and early 12th-century Kievan Rus, his knowledge extending to theology, history, literature, and Greek. He lived during the reign of Prince Svyatopolk II, who tried to steer Rus away from Greek influence towards Scandinavia.

The Monk Nestor died around 1114, having left to the Pechersk monk-chroniclers the continuation of his great work. His successors in the writing of the chronicles were Hegumen (Abbot) Sylvestr, who added the contemporary accounts to the Primary Chronicle.

The Monk Nestor was buried in the Near Caves of the Kiev Pechersk Lavra, his remains resting there to this day. 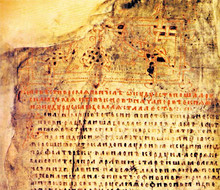 The Tale of Bygone Years

The main work in the life of Nestor was compiling The Primary Chronicle, otherwise known as the Tale of Bygone Days, sometime during 1112-1113.

Nestor’s Chronicle covers a vast range of Russian history from the very beginning up to his time. It is from the Primary Chronicle that we know the key events that shaped the ancient Rus - the settlement of the Slavs along the Dnieper River, their fights with neighboring tribes, the invitation of the Scandinavian Prince Ryurik to rule Novgorod and the first mention of the Russian nation in historical sources in the year 866.

Furthermore, he tells of the creation of the Slavonic alphabet and writing by Cyril and Methodius, the Baptism of Princess Olga at Constantinople, and the Baptism of Rus by Prince Vladimir in 988.

Nestor used a wide circle of sources such as Russian sayings and prior monastery records, the Byzantine Chronicles, various historical collections, the accounts of tradesmen, soldiers and travelers. He unified them while writing his accounts, and because of that the history of Russia appeared as an inclusive part of the world history.

The legacy of Nestor’s chronicles 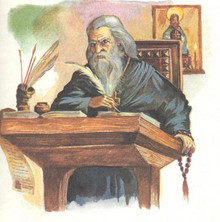 His works also became the foundation of the next significant work of history – Nikolay Karamzin’s History of the Russian State, as well as of works written by many other historians.

Other of Nestor’s works include the account of Boris and Gleb, the children of Prince Vladimir, who were killed by their brother in a rivalry for the throne, and Saint Theodosius of the Caves, the co-founder of one of the first Monasteries in Rus – the Kiev Pechersk Lavra.

In some ways Nestor has been compared to Moses, who recorded the early days of his nation. Without him the memory passed down the generations would have died long ago. His chronicles not only preserved the history, of which there would be very little known otherwise but also have entered the ranks of the significant creations of world literature.