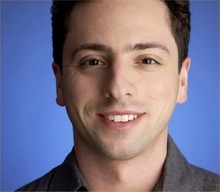 Out of the USSR

Brin was born in Moscow on August 23, 1973 to a Jewish family. Both his parents, Mikhail and Evgenia Brin, are mathematicians who graduated from Moscow State University. When Sergey was six, in 1979, the family emigrated to the USA, availing of the American programme of immigration for Jews.

When they arrived in the US, his father got work teaching mathematics at the University of Maryland. His mother took employment at the space agency, NASA.

He graduated in May 1993 with a Bachelor of Science degree (honors). But he wasn’t finished with formal education yet. He won a place at Stanford University in California on a graduate fellowship from the National Science Foundation to continue his studies of computer science. In 1995 Brin graduated with a master’s degree.

While studying at Stanford, Brin focused on internet technologies and search engines in particular. He has written several scientific works on the topic, and developed a program for converting scientific texts from unexpanded, very specific, TeX format to the more common html.

Google and the following zeros

In 1995, Sergey Brin met his future business partner Larry E. Page at Stanford. Both young men were postgraduate students at Stanford. In 1998 they set up the company – Google.

From just another tech startup, Google grew to become the largest media company in the world. It survived the crash following the dotcom bubble, even though many in the industry felt that search engines had had their day. Nowadays Google is indisputably the world’s number one search engine, supporting lots of additional services.

Google is a corruption of the word Googol – the name of the large number representing the digit 1 followed by 100 zeros. Legend has it that Googol was the original name of the company founded by Brin and Page, and it was a jokey boast about the amount of information a search engine could collect. But, when the firm’s first investor made out a cheque to a company named Google Inc, Brin and Page felt they had no choice but to rebrand.

The popularity of the search engine has introduced a new verb to the English language – to google. It has leaked into other languages as well.

Since 2001 Sergey Brin has been President of Technology at Google. He has published dozens of academic papers and is sometimes referred to as “Dr. Brin”, though he quit his doctorate studies in 1998 to concentrate on running Google. Officially, Brin is “on leave” from his PhD program in computer science at Stanford.

He has spoken at several business and academic forums, appeared on TV shows and documentaries. Moreover, Brin and his colleague Page are the executive producers of a film drama called Broken Arrow which was released in 2009.

In 2008 Brin got involved in space tourism, investing $US 5 million in Space Adventures – a U.S.-based company.

The success of Google catapulted Brin and his business partner into the Forbes List of billionaires in 2004. Brin is in 32nd place with an estimated fortune of $US 18.7 million. 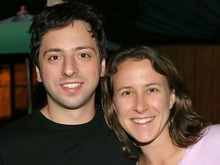 In May 2007, at the age of 33, Sergey Brin married Anne Wojcicki, a biotech entrepreneur. Wojcicki is a co-founder of 23andME, a personal DNA genotyping service. The couple are reported to have wedded in a traditional Jewish ceremony. Anne’s sister Susan, an early Google employee, let her garage to Brin and Page after they had left Stanford to launch their startup. Susan introduced Brin to her sister.

Sergey Brin’s mother, Evgenia suffers from Parkinson’s Disease. In 2008 he made a large donation to the University of Maryland School of Medicine, where his mother is taking a medical course. Using the services of his wife’s research company, 23andME, Brin has discovered that though Parkinson’s disease is generally not inherited, both he and his mother have a specific gene mutation that increases their chances of developing the illness in later years.

Although he has lived most of his life in the U.S., Sergey speaks fluent Russian. His parents devoted a great deal of time to his education, including helping him retain his native language.

Viktor Bout Former Soviet military man turned arms dealer suspect, wanted by the U.S. on charges of weapons sale to terrorist and warring factions in Africa, Afghanistan and Colombia. He has been arrested in Thailand in 2008, and extradited to the U.S. for trial in November 2010.