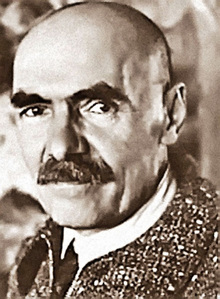 Kuzma Petrov-Vodkin was a well-known Russian and Soviet painter and writer. His artistic personality was "universal." He was interested and successful in many aspects of culture, from painting to literature and writing. Petrov-Vodkin saw the world as a whole and did not separate art from science, as was common in the Renaissance period. His main goal in life was to acquire an integral view of the world, without which, he thought, the whole creative process would be senseless.

Petrov-Vodkin was born on 5 November 1878 in the small town of Khvalynsk on the River Volga (Saratov Region) into the family of a local shoemaker. Surrounded by simple and kind people, he enjoyed a happy childhood. His childhood memories of the beauty of the Volga’s valleys, the blossoms of the local fruit gardens and the local folk tales stayed with him throughout his life.

Petrov-Vodkin’s path to becoming an artist was long and thorny. In his hometown he studied at the middle school where he got to know two local icon painters who let him observe them at work. Impressed by what he saw, Kuzma created his first work samples - icons and landscapes produced with oil paints. 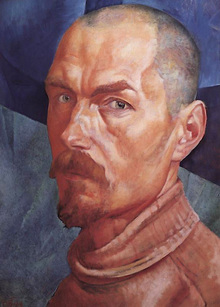 However, after graduation Petrov-Vodkin did not see himself as an artist yet and planned to study at a railroad college in Samara. When he failed his college entrance exams, Petrov-Vodkin began taking painting lessons from Fedor Burov, a Moscow-born painter and founder of the first art school in Samara. Petrov-Vodkin learned basic knowledge of painting and, after Burov’s death, he returned to Khvalynsk. There he was introduced to the famous St. Petersburg architect Ernst Meltzer. Meltzer was impressed by Petrov-Vodkin’s drawings and invited him to study at the Baron Stieglitz School in St. Petersburg. Later Petrov-Vodkin switched to the Moscow School of Painting, Sculpture and Architecture where he studied for seven years, graduating in 1905. He was a student of such famous painters as Valentin Serov, Isaak Levitan and Konstantin Korovin.

In the late 19th and early 20th centuries the fine arts were dominated by Symbolism. Contemporary painters used symbols from mythology, dream imagery or pictorial conventions to express allegorical meanings. Not so much a style of art, Symbolism was more of an international ideological trend. Symbolists believed that art should aspire to absolute truth, which can only be accessed indirectly. Thus, they painted scenes from nature, human life and all other real world phenomena in a highly metaphorical and suggestive manner.

Petrov-Vodkin, like many of his fellow students, was not satisfied with this way of representing life in art. Seeing the critical state of Russian society, the dissension of spiritual work and existing reality, Petrov-Vodkin sought to obtain a deep and universal knowledge of the world, exploring his inner self in search of the essence of life. He was interested in literature and spent a lot of time reading and writing. In a letter to his mother Petrov-Vodkin wrote: “There are so many tears and hardships in the world that all the joy vanishes and you can’t even catch happiness by its tail.”

After graduation from the Moscow School, Petrov-Vodkin was not sure whether he should continue his art career or become a writer. Victor Borisov-Musatov, a well-known painter from Saratov, encouraged him to continue with painting and suggested that Petrov-Vodkin go abroad to gain new experiences. While studying abroad, Petrov-Vodkin traveled to Munich where he took classes at the famous school of Anton Aschbe. Later he visited Italy, France and Northern Africa. In Paris he studied in several private art academies. When traveling, Kuzma Petrov-Vodkin took a great interest in everything that happened around him. He studied the art works of his contemporaries and famous painters from the past. In this period he created many drawings and sketches and several paintings.

In 1906, the artist met Maria Iovanovic, a daughter of Serbian immigrant hotelkeepers, in Paris. They were married and in 1908 Petrov-Vodkin returned to Russia accompanied by his wife. They settled in St. Petersburg and had a daughter, Elena. Maria was very devoted to her husband, inspiring and supporting him in his work. She remained his lifelong companion and after her husband’s death she collected and gave away his written and painted legacy to museums and archives.

1910s: breaking away from Symbolism and the creation of a new perspective

Petrov-Vodkin saw art as one of the life cognition forms. Art was his dream of beauty and his internal search for harmony. His early works (“Elegy” 1907, “Witches” 1907, “Dream” 1910) were influenced by German and French symbolism. Like other Symbolists, the painter tried to express the spiritual conflicts of his time using difficult allegorical compositions. His first drawings were more imitations of the style of foreign painters. But very soon he distanced himself from Symbolism and, feeling closely connected with his home country, he began searching his roots for subjects. The artist discovered anew the beauty of the Russian land, its people and culture. His images were now simple and clear, such as maternity, childhood, youth and work. 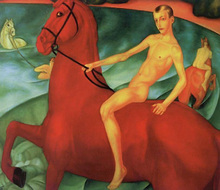 In 1912 he painted “Bathing of the Red Horse,” which made him famous and caused much discussion around his name. This work was perceived as a presentiment of a new historical epoch and made a stunning impression on art-goers, who were already used to the striking expressiveness, different symbolical constructions and extraordinary paintings of the Futurists. But Petrov-Vodkin’s painting represented something different. The plot was simple: young boys bathing horses in a pond. The colors were bright and clear with dominating red. At first glance, the scene seems quiet, even static, but tension can be felt. The painting is built on contrasts, and their interaction conveys that tension to the viewer.

At the beginning of the 1900s Petrov-Vodkin created paintings devoted to the unity of man with nature (“Mother” 1913), the beauty of the Russian woman (“Girls on Volga” 1915) and the life of Russian peasants (“Family,” “Midday Summer” 1917). His woks were attempts to synthesize Eastern and Western painting traditions. The artist developed a new theory of “spherical perspective,” concerning a new technique to depict space. He used the incline of the vertical axes of the composition to turn planes towards the viewer of his picture. This allowed for the combination of episodes from different times, highlighting motion and covering large spaces. Thus, his compositions could be viewed by spectators from different perspectives.

In 1918-1919, the artist created a series of still lives, such as “Morning Still Life,” “Herring,” “A Glass and a Lemon,” “Violin,” “A Branch of an Apple Tree” and many more. According to Petrov-Vodkin, a still life is “a conversation between an artist and his subject” in which “the plot does not distract from the definition of the subject in the space. What this subject is like, where it is and where I am, perceiving this subject - that is a main meaning of still life.”

1920s: conveying the nature of space

In the 1920s, Petrov-Vodkin continued to work on perspective and composition. He sought to achieve panoramic effects and experimented with colors, uniting all forms and grounds with the three main colors - red, yellow and blue.

Petrov-Vodkin supported the October Revolution of 1917, as he believed in the triumph of the “simple and kind.” He understood the Revolution as an historical phenomenon that opens to people a path to perfection. It was a turning point in the history of Russia, which, according to Petrov-Vodkin, had to be perceived as a “cosmic and universal” interpretation of reality. 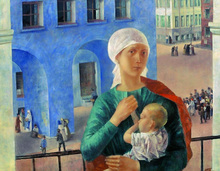 This is reflected in his works "Year 1918 in Petrograd" (1920) and "Death of the Commissar" (1928), which became Soviet era art classics. In his works during the Soviet period, Petrov-Vodkin tried to express a high humanistic sense of life and painted many portraits. He placed the individual traits of a person in the background. In his paintings, the subject was presented as a quiet and thoughtful observer who blends harmonically into his or her environment ("Self-portrait" 1918, "The Portrait of Anna Akhmatova" 1922, "The Portrait of Lenin" 1934).

Petrov-Vodkin also painted set-decorations for such famous theater plays as Schiller’s “The Maid of Orleans” (1913), Andreev’s “Satan’s Diary” (1923) and “The Marriage of Figaro” by Beaumarchais (1935).

From 1919 to 1933 Petrov-Vodkin worked as an art teacher in St. Petersburg art schools. In his teaching he tried to convey the nature of space in life to his students. He taught them to “think about the Earth as a planet.” His method was “not to push a student and make him work and think like everyone else.” Studying in Russia and abroad, Petrov-Vodkin was exposed to many different teaching methods and believed that the best one was “to be thrown into deep waters, not even knowing how to swim.”

From 1924 to 1926 the artist lived with his family in France, where he went to get acquainted with the art education and textbooks of Western Europe. Later, he made several trips across the Soviet Union, producing many works for didactic purposes.

In the second half of the 1920s Petrov-Vodkin contracted tuberculosis. The smell of oil paints aggravated his lungs and he had to give up painting for several years. He turned back to literature and wrote three autobiographical volumes: “Khvalynsk,” “Euclid’s Space” and “Samarkandia.” All of which were republished in the 1970s.

Petrov-Vodkin died on 15 February 1939 in St. Petersburg. He was quickly forgotten and remained so for the rest of the Soviet era, only to be rediscovered in the last two decades.

For his work Petrov-Vodkin was awarded the title of Honored Artist of Soviet Russia.