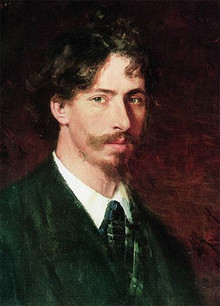 Few Russian artists gain as much fame and recognition as Repin did before they die. He was incredibly hard-working, and left a large and diverse artistic legacy. Repin had no one favorite theme, and in his paintings one can see bargemen, high officials, Biblical characters, and tsars. Some critics and fellow artists accused Repin of “inconsistency” and “externalism”, but he only shrugged: “Maybe they are right, but I love diversity and I can’t run away from myself”.

Ilya Repin was born in the small Ukrainian town of Chuguevo and as a child appeared to have a gift for painting. Local icon painters gave him some art lessons. Helping his teachers, Repin earned enough money to go to St. Petersburg to enter a painting school there, and then eventually the Academy of Fine Arts. In 1863, he successfully passed the entrance exams and considered himself lucky, although his success was more due to his own efforts rather than luck. To make a living while studying, the young artist had to work as a house-painter.

In 1868, Repin took a walk along the bank of the Neva River, and saw a group of exhausted, ragged barge haulers. Young women in bright dresses passed them by, laughing and talking. Impressed by the image, Repin composed a picture. At first he wanted to accentuate the contrast between the rich and the poor, but later abandoned this idea as being too straightforward and decided to paint only the bargemen.

In 1870, Repin went to the Volga River, and there he made the sketches for his future masterpiece “Barge Haulers on the Volga”. Locals willingly posed for him. Right after his return to St. Petersburg, he began to work on the picture that would take him three years to finish. The subjects in the painting were all real people; a former priest named Kanin, a young boy named Larko, an ex-icon painter by the name of Konstantin and eight other bargemen, ordinary people with hard lives, went down in history with the help of Repin.

Opinions about the painting were divided. For example, art critic Vladimir Stasov said: “The bitter faith of human baggage has never been shown to people in such horrible amounts, in such a great and piercing chord”. At the same time he noticed that the picture “was not painted to move the viewers to pity”, but to simply “show the types of people Repin saw”. The artist Fedor Bruni strongly disagreed with Stasov, however, and called the picture “a profanation of art”. However, the majority of critics appreciated Repin’s talent.

In 1871, Repin graduated. He was awarded a large golden medal and the right to study in Europe at the expense of the Academy for his painting “Resurrection of Jair’s Daughter”. He married in 1872 and then, when “Barge Haulers on the Volga” was sent to the World Exhibition in Vienna, Repin and his wife followed it.

Repin visited Paris and was disappointed by the works of French impressionists. “The French are not interested in people at all, only in costumes, colors and light”, he wrote in his letter. While abroad, Repin painted “Sadko” and became an academician of the Academy of Fine Arts for his work on this picture.  In 1874, Repin became a member of “The Itinerants”, the Russian realist art group.

In 1876, the Repins returned to Chuguevo, and then went to Moscow to settle there. Having the ability to work on several paintings at the same time, Repin painted portraits of famous people on demand while working on the historical canvas “Princess Sophia in Novodevichy Convent”.

In 1882, the Repins moved to St. Petersburg. Here Repin participated in “The Itinerants” exhibitions with his historical pictures. The most famous of them is “Ivan the Terrible Killing His Son”, painted in 1885. It depicts the Russian tsar embracing his son right after delivering a death blow to his temple. However, the real killing took place under different circumstances and, as they say, fate punished Repin for his “lie”; His right hand eventually began to ache, depriving him of the ability to draw, forcing him to use his left hand. However, Repin faced this problem much later in life.

Repin’s family life was unhappy. In 1887 he divorced his wife.

In 1878, Repin often visited the Moscow suburb of Abramtsevo, where well-known art patron Savva Mamontov had organized an art club. There he heard a story about the Cossacks and the Turkish sultan. According to the story, in the 17th century the sultan sent a letter to the Cossacks, demanding their obedience and their lands. The Cossacks wrote a rude and derisive, but witty answer. Repin was inspired by this story, and decided to tell it on canvas.

Thirteen years passed between the decision and its implementation. The painting was finished in 1891. A picturesque group of Cossacks gathered around the clerk, laughing and proposing lines to add to the letter. Every face on the picture was taken from real life. For example, the bald man who has his back turned to the viewers was modeled after the marshal of Yaroslavskaya province nobility Georgiy Alekseyev. He did not want to pose for Repin, so Repin tricked him into it: he asked Alekseyev to show him his collection of coins. While Alekseyev was rummaging in his desk, Repin made several sketches. When Alekseyev saw the picture, he recognized himself and was offended.

In 1899, Repin remarried and moved to Finland, to “Penaty” manor.

In 1901, Repin started to work on a picture commissioned by the government: “Ceremonial Session of the State Council 1900”. The large multi-figured painting was finished in 1903, and that’s when Repin’s hand really began to hurt. But he did not stop working.

In 1905, the first Russian revolution took place. Repin did not like Nicholas II’s regime and was waiting for the moment when “this abomination falls apart”. When it actually fell in 1917, Repin changed his views and refused to return to Russia, although the Bolsheviks kept calling him back. His attitude towards Soviet Power is concentrated in the painting “The Bolsheviks”: in it, ugly men with crooked smiles rob a little boy.

In 1920, Finnish artists accepted Repin as an honorary member of the Finnish Artists Society. Ten years later, Repin died, leaving dozens of paintings and hundreds of drawings to future generations.