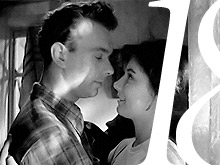 “The Cranes Are Flying” directed by Mikhail Kolotozov

On May 18, 1958 the Soviet film “The Cranes Are Flying” won the Palme d’Or at the Cannes Film Festival. Directed by Mikhail Kalatozov and based on a play by Viktor Rozov, the film tells a story of war, love and personal tragedy.

The movie was released in the fall of 1957, four years after the death of Stalin, and became a sensation first at home and then in the West. It was a change from the ideological certainties of previous Soviet films and touched on the emotional devastating consequences of war and the effects it had on the population and the individual.

Tatyana Samoylova, who plays the leading character, was also recognized for her outstanding performance and was awarded the special jury prize for best female performance at the festival. She plays Veronika, a character at first disapproved by Soviet critics for not being the ‘perfect’ leading lady as was previously seen in Soviet movies. At first the story line seems simple - Veronika is separated from her beloved Boris (played by Aleksey Batalov) by the eruption of World War II when he leaves for the front lines, but it changes to something no other film had ever told. Veronika betrays her true love and is shamed into marrying his step brother Mark, who had taken advantage of her when she lost consciousness during an air raid. Meanwhile nobody hears anything from Boris and Veronika is left constantly wondering about the fate of her beloved, refusing to believe that he might be dead.

The Cranes Are Flying takes the viewer on an emotional rollercoaster. It is packed with stunning visual effects and heartbreaking scenes, like the collage of farewells to soldiers at a train station, Boris’s hallucinatory vision of his wedding day with Veronica, and the final scenes of the movie at the Victory Day parade.

The Cranes Are Flying to this day remains the only Russian film to win the top prize at the Cannes Film Festival. It was one of the landmarks of Soviet film, earning international success and became a classic. Even today, seeing The Cranes Are Flying is a moving experience not only for a Russian but a Western audience also.

After the remarkable win in Cannes, Tatyana Samoylova was invited to Hollywood to play Anna Karenina alongside famous French actor Gerard Philipe, but she was refused to leave by the USSR State Committee for Cinematography. She later revealed that missing out on an opportunity to go to Hollywood was not what upset her the most; it was the opportunity to act with the great Gerard Philipe. Samoylova did not take many other film roles, but was noted for her role in a screen adaptation by Aleksandr Zarkhi of Leo Tolstoy's Anna Karenina in 1967. Aleksey Batalov, who played Boris, went on to star in many Russian films, including “Moscow Does Not Believe In Tears”, which won an Academy Award in 1980.