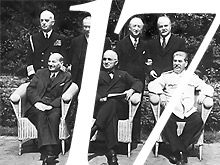 On May 17, 1960, then-Soviet leader Nikita Khrushchev jeopardized the fragile compromise between the Soviet Union and Western countries on the burning Berlin issue by abruptly leaving the Paris summit on the post-war regulation before it could even get off the ground.

Such extreme action had been taken by Khrushchev after an American U-2 spy plane was shot down deep in the heart of Russia on the eve of the conference, and US President Dwight Eisenhower refused to make an apology over the incident.

In the post-war world the status of Western Berlin had been the cornerstone of Soviet-American relations. Following the Potsdam Peace Conference of 1945, Berlin had become the Soviet territory, its western part, however, de facto remaining under the jurisdiction of the German Federal Republic. The problem was to be finalized at the Paris summit – the event, bringing together France, Great Britain, the United States and the Soviet Union. The countries had already struggled through major sensitive issues and compromise loomed ahead, but in Paris it was never meant to be.

On May 1, 1960, an American U-2 spy plane had been shot down deep into the Soviet territory. At first, the United States government denied the plane's purpose and mission, but was forced to admit its role as a covert surveillance aircraft when the Soviet government presented its remains and surviving pilot, Francis Gary Powers, who confessed he’d made the flight in compliance with the order of the American commandment.

The Soviet administration took a firm stance in the matter. Outraged Khrushchev demanded an immediate apology from the American side and a promise to discontinue surveillance flights over Soviet territory. President Eisenhower admitted he was aware of these practices, and did promise to put a stop to them, yet never took responsibility for the incident and did not offer any apologies.

On the eve of the summit Khrushchev voiced three conditions he wanted fulfilled for the Soviet Union to participate in the conference, namely, the official apology from the US President, a guarantee to stop the surveillance flights, and an investigation of the U-2 incident, followed by a trial for the culprits. The American side claimed to have ceased intelligence activity, but Eisenhower refused to apologize or open any lawsuits on the matter. On hearing the response, the Soviet delegation immediately left the conference shortly after the opening ceremony. The conference was dismissed, losing any chance at progress it could have made.

The official visit of President Eisenhower to the Soviet Union, scheduled later in 1960, was canceled, and the Soviet Union and the United States had entered another spell of tension and mistrust.