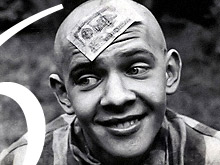 On August 6, 1993, Viktor Chernomyrdin uttered the infamous phrase “We wanted the best, but it turned out the same as always” referring to the disastrous monetary reform he oversaw as the Prime Minister of Russia in the early 1990s.

His statement has become a popular catchphrase among Russians. It is often used to describe actions that involve good intentions but either result in no effect whatsoever or bring about destructive consequences. A close synonym is the proverb “The road to hell is paved with good intentions.”

The good intentions that President Boris Yeltsin had for Russia in 1993 was the monetary reform that was supposed to control inflation and therefore help to cope with the economic crisis. On July 24, Russia’s Central Bank announced that rouble notes printed between 1961 and 1992 will no longer be accepted from the public as of July 27. That gave each individual three days to exchange an amount of up to 35,000 roubles (around $35) for the new currency.

This announcement spread panic right across Russia. Millions were lining up at banks; shops were swamped with people wishing to quickly exchange their rouble savings for any sort of merchandise.

Two days later Yeltsin decreed that the sum be increased to 100,000 roubles per person and extended the deadline to the end of August. The reform was carried out at the worse possible time of the year when most Russians were on summer vacations, far away from their place of registered residence. As a result, masses of Russians did not make it in time to exchange their cash holdings and were left stranded with lumps of illegal bills.

Chernomyrdin’s statement during a press-conference “We wanted the best, but it turned out the same as always” was most certainly an apt way of describing the situation in Russia at the time.

Serving as an advisor to President Dmitry Medvedev from June 2009 and up until his death, Chernomyrdin was known for his way with words. His statements on global situations are often full of witticisms and undiplomatic remarks. Some of his famous phrases are:

“Before, half the country was employed and the other half wasn’t, and now… it’s the other way around.”

“We have accomplished everything, from A to B.”

“We have to do what is best for our people and not what we are doing here right now.”

In the course of the 1993 monetary reforms, 24 billion notes were recovered. The reforms also lead to the collapse of the rouble zone in the former soviet republics, who adopted their own domestic currencies as a result.