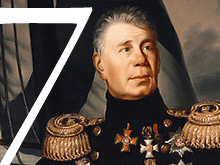 The expedition was above all organized to explore the Amur River basin and search new trade routes to the Pacific. As Kruzenshtern himself noted, the reclamation of Kamchatka and the Aleut Islands would “awaken Russian trade and relieve us from paying the British, the Danish, and the Swedish a big deal for the East-Indian and Chinese goods.”

Among other reasons was the demand for more detailed exploration of the northwestern coast of America, as the Russian-American company was expanding its interests there. The company, however, had neither human nor material resources for such a huge undertaking, so it had to resort to the state for help.

In the course of the voyage, the Russian diplomatic mission was also hoping to establish trade relations with Japan, which had been the stumbling block in the relations between the two countries until 1782, when the Japanese government finally gave the green light for negotiations. In addition to that, the common understanding was that such a mission will benefit Russia’s international prestige.

Unlike many missions, undertaken by Russian navigators that went unnoticed by people and authorities, Kruzenshtern’s venture enjoyed full moral and material support from the Russian government, was highly acclaimed by the Russian Academy of Sciences, and warmly welcomed by ordinary people.

The ships for the voyage were purchased in England. When recruiting the crew, Kruzenshtern refused to employ serfs, as was common practice. Instead, he made a call for all those willing to be a part of the venture. The number of volunteers was so big, Kruzenshtern said, he could have filled many more ships if he had to. Many of the crew who went with Kruzenshtern, later also figured in history as outstanding explorers, like Faddey Bellinzgauzen, who made himself known for discovering Antarctica.

The expedition filled lacunas in the marine landscape, discovering and mapping a number of new islands and finalizing locations of the already existing ones. They also detected several reversed flows of the Atlantic and the Pacific and performed measurements of the water properties. Even more importantly, the crew observed and recorded the habits and ways of the native population of the islands they had visited, these notes constituting very valuable anthropological material. For example, when visiting Hawaii, Lisyansky noted, “People have great taste and are very handy; everything they make is of excellent quality, while the fabrics they produce are beyond imagination. When I saw them, I could hardly believe how a savage could have such an acquired taste.”

The Russian diplomatic venture, however, did not have any positive outcome, as the Japanese authorities refused to even accept gifts from the Russian mission; they accounted for this act saying they would have to send a delegation to St. Petersburg with response gifts, but state Japanese laws prohibited any Japanese citizen from leaving the country.

Upon his return, Kruzenshtern wrote a detailed report, which was published in two volumes in 1811 in Berlin, followed by an English translation two years later, published in London. His scientific work was published 1827 in St. Petersburg and won him an honorary membership in the Russian Academy of Sciences.