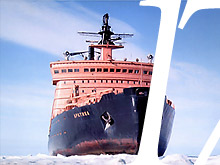 On August 17, 1977, at 4am Moscow time, the atomic icebreaker Arctica, having overcome the ice of the Central Polar Basin, became the first surface craft to reach the North Pole. The icebreaker covered 2528 miles in 7 days.

The original idea was to replicate Chkalov’s flight over the North Pole to America, but by sea, arriving in the States just in time to join in on the celebrations of that country’s 200th anniversary. The high authorities however, denounced the American component of the trip, though the idea of conquering the North Pole by sea was deemed very becoming.

All of the preparatory activities were done in the strictest secrecy. Arctica was the second icebreaker in history, first launched in 1975. Before the trip was executed, a thorough air reconnaissance of the area was undertaken, as the Arctic ice was very mobile and could change its location very often, causing plausible danger to the icebreaker. The expedition consisted of over 200 members. Aside from the record-breaking mission of reaching the North Pole, its other goals were checking the icebreaker’s properties and its resistance capabilities when confronted with constant ice clashes.

On reaching the North Pole, it spent 15 hours on top of the world.

Once the crew and the rest of the expedition members came out on the ice to celebrate, the political propaganda agent – the person responsible for the proper coverage of the event for Soviet history – immediately organized a meeting to commemorate the memorable moment, starting with an address from the Soviet leader, Leonid Brezhnev. He drafted a meticulous plan, including not only agenda of the celebration, but time slots for applause, tears of joy, and expressions of delight. Some people organized fireworks and salvos from the weapons they had on board. A steel mast was erected on the site with a Soviet flag fluttering on it, and a huge steel plate was dropped on the ground with the Soviet coat of arms. On returning to the Soviet Union, all of them became instant heroes, and their feat was even compared to Yury Gagarin’s first space flight.

All of the crew members were awarded the title of Hero of Socialist Labor, while the rest were given medals and granted titles of honored polar explorers, though some of them had only been on board the icebreaker as someone’s friends or relatives. This decision was taken by the real polar explorers as an insult, as normally, polar explorers could only become honored after up to ten years of work.

Amusingly enough, after the expedition returned, they were all promised a free Volga, a very expensive and hardly affordable car model in the Soviet Union at the time. When the decree for issuing Volgas was finally signed, it turned out only 2 out of 26 made their way to their new owners, as 24 others were stolen by the authorities.

Later, the trips to the North Pole became a routine for icebreakers. Adding up to its feat, the Arctica won its laurels, spending a year from May of 1999 until May 2000 in the open sea, without entering port. It also became the first ship to break the one-million-mile barrier since its launch.