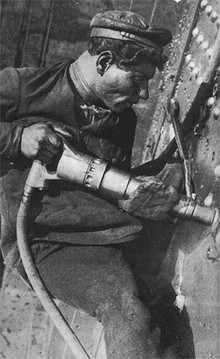 A worker at the URALMASH construction site

An “Udarnik” is a Soviet word for an overproductive worker. The udarnik movement was launched and supported by the government to intensify the industrial development of the country.

The movement appeared in the 1920’s.  The Bolshevik country was young, and had just survived a revolution and a civil war. Industry and agriculture were in ruins, and to restore them as fast as possible, the government, among other things, launched a propaganda campaign. Posters, newspapers, and radio programs described everyday labor as a battle for a better life and for a socialist future. To win this battle one had to work harder and smarter than, for example, his colleagues – and so workers, brigades and whole plants everywhere began to join “socialist competitions”. The Soviet Union was a state with a planned economy, so workers aimed to exceed the quotas. Even the Siberian concentration camps participated – udarniks in forced labor received their small piece of fame and respect too.

Propaganda, of course, was not enough. To motivate people, government adopted something which it had thrown away several years before for being anti-socialistic and exploitative: payment by results. Inflation turned money into useless colored paper, so first time udarniks got paid in special food talons.

Plant administrations often chose “udarniks to be” by its own will and gave these workers best tools and the best work conditions. They overproduced the quotas, and received privileges, while the others did not even have opportunity to show themselves. Sometimes, records were completely falsified.

In 1935, mineworker Aleksey Stakhanov with two helpers in one shift mined 102 tons of coal instead of planned 7 tons. This news made the front pages of all Soviet newspapers, and udarnik movement was named after Stakhanov. 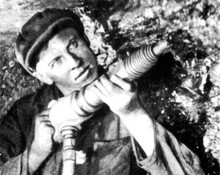 Inspired by Stakhanov’s example, thousands of factory workers, doctors, peasants, even policemen tried to exceed their quotas. Some of them went as far as to hospitals with extreme fatigue, but some made it into the history books.

Public opinion about udarniks was ambiguous. People were inspired by all the records they read and heard about, and the official title “Udarnik of Communist Labor” was considered a great honor. On the other hand, quotas grew record by record, and salaries just the opposite, became smaller and smaller.

By the 1980’s, the movement ran out of steam, though formally it had been alive until the collapse of Soviet Union. Nowadays, both the term and the idea are still in use in China and North Korea.