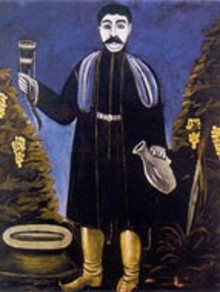 
A tamada is a person who entertains guests at weddings and other kinds of celebrations from the start till the very end. He works out the scenario and comes up with numerous eloquent toasts, jokes and other things to keep the party moving.

The word comes from the Republic of Georgia in the Caucasus where traditionally during a feast the oldest, wisest and most respected man is chosen to be in charge of the party. He is the one to supervise both wine drinking and the telling of long philosophical stories. The art of the tamada is passed from one generation to another.

The key thing for a youngster is to learn how to make long toasts about many basic human values in a nice and charming way. Here is one of them,

"Once people asked the wise man, 'Why can friends so easily become foes? And why is it difficult to turn foes back into friends?' 'Well, it’s easier to destroy a house than to build it,' said the sage and added, 'It’s easier to break a jar than to make it; it’s simpler to spend money than to earn it.' So let’s drink this toast to making good things and not destroying them."

Years later, Russian people adjusted this Georgian tradition to modern realities. Here’s the most wide-spread toast with a flavor of the Caucasus which says a lot about the importance of team work (it was of crucial importance in Soviet times):

"Once upon a time there lived a small, but very proud bird. She said,  'I will fly away alone right up to the Sun!' The bird began to rise higher and higher but soon she burned her wings. Then she fell down to the bottom of the deepest canyon and died. So let’s drink for each of us to stay together as a team!"

In old Russia a tamada was called a druzhka (“buddy”). He was the main person during weddings. No one could start celebrations without his go-ahead. Jokes and rituals were prepared in advance and everything had to go according to “the buddy’s” plan. But as the years went by, this term vanished and was replaced by the word tamada.

There’s a psychological factor behind all this: weddings in Russia used to last two days. And in some of the former U.S.S.R. republics - in the Caucasus and in Central Asia - they were even longer. (The global financial crisis, however, has made most people reduce festivities to one day). It is customary for guests to have a sit-down dinner. It can be somewhat uncomfortable for first-timers, who do not know most of the people around. So it is up to the tamada to break the ice and get the party rolling.

So what do tamadas do to keep everyone happy? The beginning of the ceremony is very important. It has to be dynamic, touching and not too organized. After the couple registers the marriage and arrives at the location of the party the parents of the groom usually welcome the newlyweds with bread and salt – a symbol of Russian hospitality. At the same time the tamada reads verses about eternal love and the importance of family ties.

During many village weddings he does this to the tune of the accordion player who is usually his “Number One Assistant” (in modern weddings there may be even rock bands). Some parents and guests start crying the tears of happiness when they see this touching scene. If they do, it means that the tamada has done the first part of his job extremely well.

The next important thing at the wedding is to set up a “drinking pace.” If all the toasts are pronounced in a short period of time the party would be over very soon because the guests may simply get drunk in a matter of minutes. On the other hand, the tamada has to be careful not to make the wedding dull and boring: he has to do everything possible to set the timing for each toast to guarantee the natural flow of the event. He may make some toasts himself and then turn it over to the guests. First, the best man has his say. Then come the parents and the oldest wedding member. And the job of the tamada in this case is to make a good introduction to each of the toasts.

When guests get a little bit tired of eating and drinking, it’s time for the contests and games. One of the most popular is the singing competition. For example, the guests of the bride start to sing. Then the tamada stops them at a certain word. The task of the groom’s party is to start singing the song that begins with this very word. If they can’t, they lose.

In this case the tamada has to come up with some kind of a funny punishment that will entertain everyone. Another popular wedding competition is dancing together on a piece of A4 size paper. To do it successfully the men have to hold the ladies in their arms. It is always the strongest one who wins. 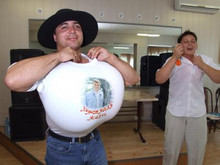 After another period of eating, drinking and dancing comes the climax of the entire ceremony: the bride has to be stolen. There are several ways to do this successfully. Here are two of the most popular:

- the tamada distracts the groom’s attention which lets some of the guests take the most beautiful lady of the evening away. To bring his loved one back the groom has to go through a chain of funny tests prepared in advance;

- any smart and quick-witted guest (or several guests) can steal the bride and demand a symbolic ransom for this. In this case the tamada accompanies the bargaining process with lots of jokes.

The duration of both events is 15-20 minutes. The end is the same: the bride returns safe and sound. After this the party usually rolls on to its successful finish.

The homework before party

At all times during the entire evening the tamada has to be on the alert – no one can say how the party will go and who will say what. He can only do his job well if he has done his “homework” properly. The tamada should:

- memorize the names of the bride, the groom, their parents and their closest friends and relatives;

- take into consideration all customs and traditions of different ethnic groups so as to not risk offending any of the guests. Russia is a country of more than 160 nationalities. So interethnic marriages are quite a common thing;

- talk to the members of the families about things that might be very sensitive to mention.


If you type the word tamada in any search engine you can easily find thousands of websites in Russia as well as in other parts of the former Soviet Union. You will be able to find various scenarios of weddings and other parties. You can even borrow a couple of eloquent toasts from them.

Being a tamada is usually a good way to make money for some actors. That’s why sometimes more experienced people invite their co-actors and musicians to make the event even more spectacular. Being able to sing is a plus for a tamada but in most cases it is not necessary. The main idea is to make the bride and groom as well as their friends and relatives remember this party for a long time.