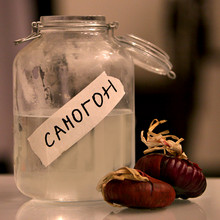 Russia is synonymous with Vodka, but travel out of the cities and down to the back woods and a different drink challenges Vodka as the tipple of choice.


It’s called Samogon, Russian moonshine. It comes in many flavours, is distilled from many ingredients and is often of near atomic strength. It holds a special place in Russian drinking culture as a kind of Robin Hood of alcohol.

Appearing around the 14th century, Samogon was from its inception illegal, a popular way to get round Ivan the Terrible’sstate monopoly on wine. It has occupied that folk hero’s role ever since, defying all attempts by Tsars, Soviet officials or the modern day police to root out backyard distilleries. This is mainly because it manages to keep often very poor Russians merry without the cost of buying alcohol.

Its main opponent has been Vodka, also much loved by Russians. Vodka was created after Samogon and much-promoted as a state alternative to home brews. It was standard in quality (at least officially), cheap to make and even though duties were small, its sales filled the Russian treasury’s coffers.

But even the relatively cheap Vodka was out of reach for some rural labourers, and that, combined with contempt for central authority, ensured Samogon continued to flourish. Another appeal of the drink is the myriad of ingredients you can throw into the fermenting mix. Sugar is needed to help the process, but there’s also grains, corn, beetroot or potatoes. To sweeten the mix some distillers add grapes, fruit, honey or any manner of weird and wonderful things. If it’s lying around in reach of the Samogon maker, it’s probably been tried! 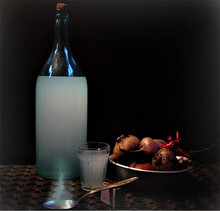 The first alcohol to distill from the murky mix is called “pervach”, meaning “the first one”. It’s very strong, as alcohol evaporates at lower temperatures than water and so collects first. It is also more like vodka with almost no taste or smell. The remaining mixture evaporates slower, and what is collected becomes more pungent and impure. To get over the increasingly foul odor, fruity and sugary ingredients are added to brighten the drink.

Unfortunately, like moonshine around the world, making Samogon can involve cutting corners which results in concoctions that are literally deadly. Professional-standard stills needed to evaporate the liquid and re-condense it are expensive, so cheaper or home-made versions are common. But some people use heaters from car radiators, which can lead to antifreeze or lead getting into the mix, both of which are deadly. The other main risk comes from attempts to boost the power of the drink. Some Samogon makers add cheap methanol to the mix, which can create a toxic mixture capable of causing blindness or death. Alcohol over 80% proof (yes it can get that strong!) is also highly flammable. So if you dare drink it, you might want to pass on that cigarette!


Since the start of the new millennium Samogon, which has hidden in the shadows for so long, 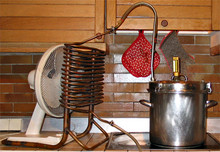 may be moving into fashionability. So called “Kosogorov Samogon” is a legalized brand of the drink competing for a place on bars alongside its old rival, Vodka. And sales are reportedly doing well, with the brand hitting on the idea of the rebel backyard booze and turning it into a commodity for those perhaps not willing to risk the real thing.

Samogon is as rich and diverse as those who make it. It can be delicious or deadly, but as long as it’s cheaper than the legally endorsed alternatives, you can bet you’ll still find home-made stills in the backyards of rural Russians.