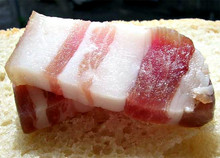 One of the most tasty and healthy treats in Russian culinary tradition, salo, is a low-meat high-fat salted companion often used to chase with Vodka.

The slabs of pork are salted or brine fermented and sometimes smoked. It is aged in a dark, cold place and can last for more than a year. It is important that salo not be exposed to light or aged to long as the fat can become oxidized causing a bitter taste. However, should a batch of salo go bad, it makes an excellent water-repellent for leather boots.

One common misconception is that salo is lard. This is not the case as lard has been converted from waste animal tissue into an edible product.

Salo is often eaten straight up, but can easily be cooked or fried with and used as a condiment to popular dishes like borsh, sausage and placed on bread to eat alongside Vodka. It also makes a great addition to any sandwich. If the cooking oil runs out, one can always use salo to melt down and use as a great frying oil.

Salo occupies a special place in Russian and even Ukrainian culture. Where vodka is often associated with being Russian, salo maintains the same place for Ukrainians where it is often said that salo is the highest object of desire for a Ukrainian.

In Odessa, Ukraine a candy factory started producing a confectionary treat called ‘Salo vs. Chocolate’.  The candies were invented for an April Fool’s day joke to poke fun at Ukraine’s cuisine, and while they don’t contain actual salo, they do have a small amount of rendered fat which give them a salty taste. It’s even known as ‘Ukrainian Snickers’. 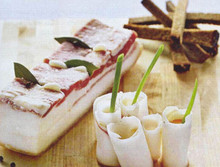 While loved by Russians and Ukrainians, salo is often the object of absolute disgust for most foreigners. When presented for the first time with salo, a foreigner might think they are getting some kind of clear gelatin desert. However, the immediate reaction shows that while salo is gelatin like, it certainly is no jell-o.

For those, who don’t enjoy eating but realize the importance of getting the recommended daily amount of calories, salo is the perfect food. Salo, in just one hundred grams, packs 700 calories. Included in that 700 calorie figure are 70 grams of fat, 14 grams of carbohydrates and 12 grams of protein. That means that the average person could eat just three servings of salo and reach the daily recommended amout. Needless to say, it is probably not a good idea to try this method. However, to make up for the fact that 100 grams already pushes the recommended daily fat intake above the threshold, salo is rich in vitamins A, B and D.

When not eating salo, one may use it for medical purposes as well. Should a tooth ache suddenly appear, simply apply a bit of salo to the tooth and the pain should calm down in a couple minutes. It also can be melted and mixed with hot water and drunk when suffering from bronchitis.

Red Army National Military Forces service, founded in 1918, which was renamed Soviet Army after the end of the World War One and lasted all the way until the breakup of the Soviet Union in 1991.