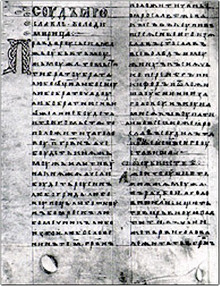 In search of truth and justice

It could be translated as both “Russian Truth” and “Russian Justice” and while researchers say the latter one is probably more accurate, this early legal code of Kievan Rus heavily relied on what was considered  truthful or fair at the time.

This code was discovered by the historian Vasily Tatishchev in one of the Novgorod chronicles in the 18th century.  About thirty years later, in 1767, the first annotated edition of the code was published. Since then, more than 110 extant copies dating from the 13th to the 18th centuries have been discovered in various chronicles and compilations.

Believed to have been compiled in the second half of 11th century, Russkya Pravda provides legal guidance to the most common crimes and disputes of the time, with murder and inheritance contests topping the list. The concept of equality before the law didn't exist.  In fact, the perceived gravity of crime and subsequent punishment greatly depended on the social status of the individuals involved.  A peasant killing a person of privilege would incur double the punishment that a silver-spooned individual would be subjected to if they were to kill a peasant.

The code distinguishes between involuntary manslaughter and premeditated murder. This particular care for intention led to greater punishment for crimes that cause insignificant bodily harm, yet brought about shame. For example, hitting an enemy with the blunt side of a sword was considered a greater insult than actually impaling him, because that would mean the enemy wasn't seen as an equal.  Cutting a person's finger off was less of a crime than pulling his hairs off, which ranked as an ultimate put-down. 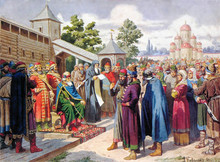 While the code was void of abstract concepts such as property and possession, it provided a solid framework for the protection of one's belongings.  Its authors attempted to list all possible threats to one's property, with robbery, arson and horse-stealing considered some of the most galling crimes.

The code included the concept of excessive self-defense. Killing a thief caught red-handed was considered different from attacking him a few days after the theft.

The age of the criminal didn't matter – a child was subjected to the same punishment as would be his father of grandfather. Being drunk during the crime had a mitigating effect, malice was an aggravating circumstance.

Finding witnesses was critical to proving one's guilt. Material evidence played the same role as testimonies obtained under torture. Breach of contract was also punishable and easily proved with the help of witnesses who had to be present when deals, mostly oral, were struck.

Unlike many contemporary codifications, for example the Salic law, Russkya Pravda lacked capital punishment. Yet many historians believe that it did exist in the form of blood feud. 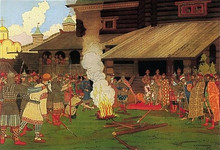 Even the most grievous crime was considered a sort of economic insult that could be compensated by blood revenge or the payment of reimbursement, known as “vira”, to the prince and the victim.

Both Russia and Ukraine consider the code a brilliant example of their historic legislature and, therefore, disagree which country can claim the authorship. The controversy manifests itself in the spelling of the code. "Rus'ka Pravda" or "Ruska Pravda" reflects the Ukrainian claim, while "Russkaia Pravda" or "Russkaya Pravda" suggest the Russian origin of the code. Ukrainian historians and a few other scholars outside Russia consider the spelling "Rus'ka Pravda" to be more correct in terms of history, while many Russian scholars maintain that such spelling reflects an anti-Russian bias.

Blat Blat is one of the pillars of the Russian way of life. It is akin to nepotism, only with blat, no blood ties are necessary for one party to bestow favors upon another.