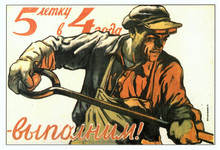 Pyatiletki, or 5-year plans, are viewed as having very mixed results. They’re seen both as an astonishing achievement, which dragged the USSR out of industrial backwardness, and as the creation of a work-camp state costing millions of lives and setting up the inefficiencies which would later destroy the Soviet Union. Both views have some justification, but let’s start by taking a look at the objective behind the five-year plans.

The first five-year plan was created by Stalin in 1928. In a speech to factory workers in 1931, he made his reasons clear, saying that Russia was "fifty or a hundred years behind the advanced countries. We must make good this distance in ten years. Either we do it, or they will crush us.” It was the culmination of the industrial age, with international competition measured by how much steel and coal, how many tanks and ships, railways and rifles could be produced. The plan focused on heavy industry, and proved a remarkable success in that area. Coal and iron output quadrupled, electricity generation increased and 1,500 new factories were built. 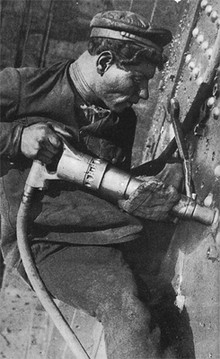 A worker at the URALMASH construction site

Introduced in 1932, the second five-year plan had the same aim. The Soviet Union became one of the world’s leading steel producers, not far behind Germany. Its railways expanded. However, coal and oil production targets were not met. Problems with the system emerged from the beginning. The emphasis on mass production lead to widespread lying about output figures. Workers and resources were hard to come by. Mothers were encouraged to work in the factories and childcare was offered so they could leave their children at home.

By the outbreak of World War II, the Soviet Union had achieved sustained annual economic growth of 12 to 13% for most of the 1930s. That feat has few parallels in economic history. But the gains came at a terrible cost. The focus on heavy industry led to a decline in the standard of living for ordinary Soviets, as production of consumer goods, which flourished in other countries and particularly in the United States, was ignored. Many huge construction projects were completed using the mass slave labor of prisoners, with awful working conditions and resulting in thousands of deaths.

One of the biggest failures was in agriculture, with disastrous consequences. The creation of kolkhozes, or collective farms, was intended to make agricultural production more efficient and bring all the workers together as equals, removing the need for the so-called kulaks, slightly wealthier farmers and landlords who made money through trading produce. The kulaks were indeed ‘eliminated’, mostly with the use of bullets. The chaos which ensued in the attempts to completely change the agricultural system overnight led to huge falls in productivity. In 1932, famine swept across the Soviet Union, and millions starved.

As the 1930s wore on, fewer and fewer targets were being met. Besides inefficiencies in the command economy system and shortages of food, Stalin’s Great Purge was in full swing by 1936. Many who were shot or sent into forced labor in the Gulag were from the professional class vital to the operation of factories, farms and engineering projects.

And by 1941 the USSR would need every industrial asset it could get, as the Nazis had arrived.

By the war’s end, the Soviet Union’s losses in men and materials were staggering. 98,000 collective farms laid to waste, 25% of all industrial equipment destroyed, 40% of urban housing destroyed, leaving 25 million homeless. And above all, the war claimed as many as 27 million Soviet lives. 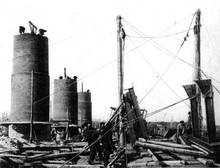 Construction of the URALMASH plant

Thousands of factories had been moved east in one of the most incredible industrial migrations in history. This, and the industrialization of the 1930s, undoubtedly helped to save the Soviet Union from total collapse. But thousands more factories had been lost, and manufacturing was knocked for six by the war. Compared to1940, production levels in mining and metallurgy were at 40% of what they had been, electricity generation was at 52%, pig iron at 26%, steel at 45%, and food production at 60%. The Soviet economy was in tatters.

The five-year plans now became the vehicle to drag the USSR back to productivity. It would be a tortuous road, with smashed infrastructure and huge labor shortages due to the number of war dead. Though food rationing ended in 1947, agricultural production only reached pre-war levels again by 1952.

The plans continued right up until the end of the Soviet Union in 1991. A steady decline in efficiency and economic growth, which began in the early 1950s, was never stopped. By the mid-1980s, when Mikhail Gorbachev introduced Perestroika to try and invigorate the Soviet economy, the system was so bloated and inefficient that the country was already on the road to the economic crisis which would see the collapse of communism throughout Eastern Europe. For all their optimism and early achievements, it is worth admitting that the five-year plans also cost far too much and may ironically have played a significant role in the destruction of the system that created them.