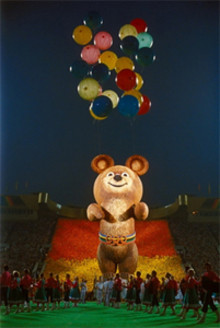 Farewell to you, our tender Misha,

Go back home to your wood of fairy tales,

Don’t be sad, give a smile before parting,

A translation of part of the closing song from the 1980 Moscow Olympics, Misha the bear, the symbol of the Olympics, was tearful to say goodbye. But it’s interesting that Misha was chosen as the mascot by a public poll. When Russians thought of a mascot for their country, even after decades in the USSR with no official symbol animal, they thought of a bear.

The outside world has long associated Russia with bears. Its connotations are usually negative, with many viewing ‘The Russian Bear’, especially from the 19th century, as big, brutal and clumsy. It can be seen in political cartoons of the time.

And even in 2009 when Obama visited Moscow, the stereotype stuck on some front pages. 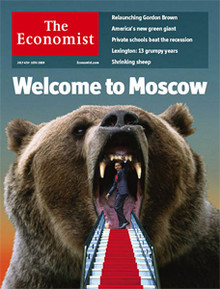 But Russians’ association with the bear as a symbol and animal is far more complex. It is a national symbol, a marketing tool, a wonder of nature, an unspoken fear and a prize for hunters to name but a few.

To start with, Russia is thought to have the worlds largest bear population, at around 120,000. They are brown bears, cousins of the grizzlies in North America. They eat salmon in the rivers of the Far East and hunt anything they can in the rest of Russia. A fearsome and intelligent predator, bears have long been revered by the locals who live in the forests with them and they have a place among the mythical animals of Russia’s songs and stories.

In the story of Morozko, the hero, trying brashly to impress the girl he wants to marry, tries to kill a mother bear and her cubs. A forest spirit, Father Mushroom, is so incensed by this brazen attack he turns the hero’s head into a bear head, which makes him terrifying to everyone, and so he is ostracized.

Sadly, in real life many hunters want to shoot Russia’s bears. A few are legally hunted each year and a tourist can pay $10,000 for a bear. Poachers though claim hundreds more for skins or for things like the huge demand for animal parts for Chinese medicine. 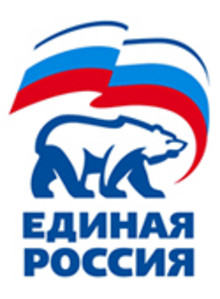 As a marketing symbol though, the bear remains as powerful as ever. There is at least one beer brand featuring a polar bear, and the country’s ruling political party, United Russia also features a white bear. Its connotations of strength and power are something companies as well as the national spirit would like to bask in.

However, the bear also engenders fear, and it’s a fear deep in the Russian soul. The name says it all. All Russians call the bear “Medved”, meaning something akin to “the one who likes honey”, from the Russian for honey, “Med”. However, an interesting test you can do, ask a Russian where a bear lives, what’s the Russian for a bear’s house. They will tell you correctly it’s called a ‘Bearlogga’. In this name we find, hidden away in the language the true name of the Bear in Russian. It’s…..Bear! But a long time ago the superstitious Russians decided that saying the name of something terrible would make it appear. Clearly it wasn’t very convenient to have a huge bear pop up in your kitchen just because your kid said its name, so they changed it, to protect them. Actually similar things have been done to scary animals or phenomena the world over.

Russians will forever be linked with the bear as an animal and a symbol. As foreigners learn more about Russia perhaps the image solely of the big, nasty Russian bear will be replaced by a more complex one, clever, wild, majestic and ferocious. Because underneath Russians do identify with the bear. They fear it, they respect it, but they also want to emulate it.