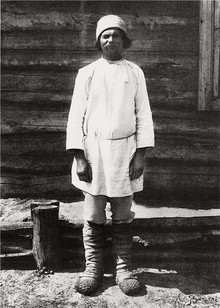 A shirt with a skew collar

Kosovorotka is the name of a Russian shirt that is probably easier to wear than to pronounce. Kosovorotka is a traditional Russian men’s shirt with a collar that fastens on one side (usually – on the left) instead of the more common central position. It first appeared in Russia around the 12th century.

The word kosovorotka is derived from two Russian words koso – askew, and vorot – collar. Literally it translates as a shirt with a skew collar. Was the new shirt design inspired by some new fashion? Not really. Academician Dmitry Likhachev explains that the design in that “a lateral slit has to prevent the crucifix worn around one's neck from coming out during work.”

From peasants to the military

The Russian kosovorotka, usually mid-thigh length and long-sleeved, vaguely resembles a Greek or Roman tunic. It is never tucked in, and is tied around the waist with a thin rope made of silk or wool. The knot is traditionally worn on the left side, and the belt can have tassels at the end. Traditionally, kosovorotka is made of linen, satin or silk, with rich embroidery on the sleeves, hem and collar.

Generally, the traditional Russian shirt is associated with peasants, but it was also used as underwear for soldiers, in which case it was tucked into trousers. It served as a prototype for the gimnasterka - the Russian soldier's blouse that appeared in 1880.

Today, kosovorotka appears mostly as a souvenir and the only people, who wear it are Russian folk music and dance bands. However, modern fashion designers have made kosovorotka-style blouses, a look that is presently very much in vogue.