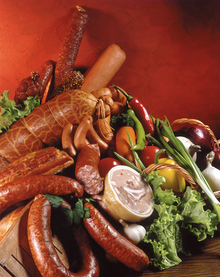 Kolbasa is a Russian variety of sausage made from ground meat and wrapped in a special casing. The casing was originally made of animal intestines. Nowadays it is still done this way for expensive brands, but most of the casings are otherwise synthetic. The word kolbasa, does not denote the small sausages of English or German type (Russian words for “small sausages” are sardelki or sosiski).

The production of sausages is one of the oldest food preservation techniques. The Russian word kolbasa as well as its variations in the Slavic languages (for, example kielbasa in Polish) originated in what is now Turkey. It literally means “pressed by the hand.” (Though some researchers stick to the Hebrew origin of the word – the word combination kol basar used to mean “all flesh”).

The first sausage processing factories appeared in Russia at the beginning of the 17th century. But in Soviet times – due to centralized planning – kolbasa production was dealt a heavy blow. Bad harvests meant cattle were undernourished and kolbasa became a rarity in stores all over USSR. Some factories started adding synthetic additives to keep production volumes afloat.

One of these additional additives was a substance that was also used to make toilet paper!!! So the expression “toilet-paper kolbasa” became popular at that time. People also called this cheap kolbasa made of who knows what sobachya radost (“the dog’s paradise”).

Ordinary people could find good kolbasa only in Moscow and some other cities with big meat-processing plants. But finding did not mean getting - even in Moscow one had to stand in line for an hour to buy it. Thousands of people flocked to the capital from other cities to spend money on kolbasa and other hard-to-get items. There was even a joke in the form of a riddle about the train from Moscow (the trains in USSR were green): “What’s long and green and smells like kolbasa?”

During the time of “kolbasa deficit” there was an abundance of cheap fish in stores, prompting another popular joke: “The best fish in the world is kolbasa.”

Today kolbasa is once again available in many varieties and in various forms. Listed below are the most popular kinds, which can easily be bought at any supermarket or shop. 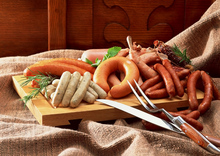 is made of salted ground meat. It’s boiled at a temperature of about 80 degrees Celsius. This type is kolbasa is usually thick and round in shape. When you cut it into slices, you’ll see that each brand has a unique interior pattern. It can be preserved for a short period of time – not more than one week. The most popular type of “varyonnaya kolbasa” is “Doktorskaya” (doctor’s kolbasa), a solid round of fleshy light-grey ground meat with the addition of soybeans. It got its name thanks to the doctors that researched problems of nutrition. According to them, this type of kolbasa is a good product for those who follow a diet to treat ulcers.

This type is first boiled and then smoked. Unlike boiled kolbasa it is smaller in size. It contains smaller pieces of meat of various sizes with a small addition of milk, cream, flour and starch. It can be preserved for 10 to 15 days. The most popular brand of varyono-kopchyanaya is Moskovskaya – with its pieces of dark meat and fat, it is delicious when served cold.

This one is even smaller in size than the previous kind. It is smoked at a temperature of 20-25 degrees Celcius.

This is today’s version of traditional kolbasa. It is still made with real intestines. Here is one of the ways it is produced: first, grind together meat, garlic and fat. Then add salt, pepper and all the spices you like – even cognac or some sort of alcohol can be used. Finally, place it in a dish and put in the oven.

This type of kolbasa has become popular among businessman – in many regions of Russia you can easily launch kolbasa production for the equivalent of 20-25 thousand US dollars.