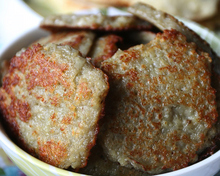 Draniki or potato flapjacks, are thick pancakes made from potatoes that are served hot with cold sour cream, garlic sauce or berries (cranberries are especially good). The name draniki means “having been grated” because the potatoes are not cut but finely grated.

Draniki originated in Russia some 200 years ago. The first mention of the dish dates back to 1830, though it is also said the dish was a kind of imitation of a German course. There are international variants of Russian draniki such as Ukrainian deruny or kakorki, Polish tartyuhy and Israeli latkes.

Draniki, quite unlike Japanese sushi or French fondue are not considered an exquisite dish. This is due to the “low origin” of the main ingredient – the potato. For a long period of Russian history, and even nowadays, this vegetable is associated with needy, common people.

There are numerous recipes for the dish that vary from family to family and from region to region. Some add onions; others who are more carnivorous add minced meat and still others mix grated potatoes with grated carrots.

But traditional Russian draniki are prepared in accordance to several fixed ruled, the main one being never use flour when making draniki!

- Take six or seven big potatoes, an onion, a tablespoon of sour cream and salt.

- First grate the onion then the potatoes. Mind that the latter should be grated very finely. It is highly recommended to stick to this order because if you grate the potatoes first your draniki will acquire an ominous bluish tint. Then add the sour cream and salt.

- Heat up the frying pan and fry your draniki.

Originally draniki were rather big – the size of a saucer and thus looked like small suns, however you can make them any size you prefer.