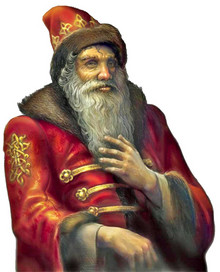 
In Medieval Russia, the Boyars represented an aristocratic tier of society as well as a powerful group with the privilege of advising the Tsar on administrative issues. Russian people in those days summed up the Boyars’ function by saying, “The tsar said it, the Boyars did it”.

Historically, these members of the nobility took up the highest military and civil posts and also formed a supreme council, the Duma, from the early centuries of Kievan Rus (10th-12th) until the time of Peter the Great (17th), when he did away with the rank.

Besides the real aristocracy, a rich landowner could also be called a Boyar. A modified form – barin was used by serfs to address their masters until the 19th century.


Each Russian ruler was always surrounded by a group of advisors. For example, Ivan the Terrible had his Izbrannaya Rada – a confidant council, without which he couldn’t make decisions; dignified advisors from Western Europe had an influence on the mindset of young Peter the Great; Grigory Rasputin was a high-powered oracle for Tsar Nicholas II and his family…

Very often a ruler’s coterie hailed from the Boyars, and Russian people always believed them to be greedy, cruel flatterers. Their intrigues were often seen as the ‘dark side’ of the kind and mellow monarchs, who were, Russians felt, often deceived by the Boyars. The Russian fairytale The Tsar and the Thief tells the story of a group of Boyars, who decided to poison the Tsar. While they were preparing, a thief crept into the palace and accidentally overheard their cunning plan. He told the Tsar at once, and was asked to pretend to be a foreign merchant to expose the plot. So, when the Boyars offered the Tsar a cup of poisoned wine, the thief said, “There is a tradition in my land – he who offers, tries first”. One of the Boyars was forced to have a sip. He emptied the wineglass and dropped dead that instant. The Tsar then had all of the conspirators hanged, and made the thief the Chief Boyar instead. 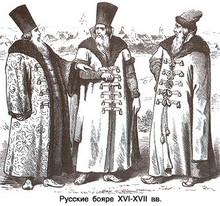 A specific detail one can spot in any Boyar is his bushy beard. Traditionally, the male population of Russia and especially Boyars, the keepers of all traditions as they were, were obliged to wear beards according to religious order. The punishment for shaving was barely less serious than the penalty for murder of a free man. A makeover of the Russian people began after Peter the Great came back to Moscow after his Grand Embassy to Europe. The day after his return, he ordered scissors, and himself cut several noblemen’s beards in public. The Boyars were shocked and humiliated, fiercely condemning Peter’s new practice. There were even those who committed suicide after losing their beards. All across Russia, people believed shaving to be a sin, and priests denied their blessing to those without beards. The Boyars saw Peter’s actions as an attempt to disrupt the very pillars of Russian life. As a result, the Tsar imposed back-breaking taxes on those who insisted on wearing facial hair to encourage Russians to adopt the Western European custom. Special metal tokens were used as proof of payment of the ‘beard tax’. Stubborn Boyars had to pay the top facial hair tariff until it was abolished later in the 18th century.

«Boyar wedding ceremony in the 17th century», by Konstantin Makovsky, 1883

Boyar feasts in Russia could easily compete with Roman banquets with their bounty of dishes and beverages on the table. At least a hundred courses were served on gold and silver trays, and one’s refusal to eat or drink meant offending the host, that is, the Tsar. The main dish on a Boyar’s table was usually a roast swan, which was a symbol of respect for the visitors. Boyars’ guests used to clink before drinking so vigorously, that the wine would spill over from one glass to another, showing that there was no poison. People in modern Russia still clink when they toast, oblivious of the tradition’s sinister origin.

To surprise guests and feel the atmosphere of the 15th-century Moscow court, you can make a Russian cocktail called “The Boyar”: mix in a shaker 15 ml of dry vermouth, 7 ml of Kummel liqueur and 60 ml of vodka. Pour into a cocktail glass, don’t forget ice - and make sure it’s poison-free!

Written by Evgenia Skorchenko for RT