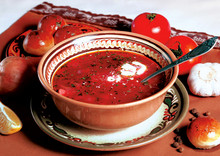 The reddish-purple soup “borshch” is well-known as a trademark of Russian and Ukrainian culinary traditions.

Historically, borshch used to be the national food in Ancient Rome, where cabbages and beets were specifically cultivated for that purpose. However, various sources suggest the modern version of borshch appeared around the 15th century.

One of the popular but unproved legends says the first-ever borshch was cooked by the Cossacks in 1637 during a two-month siege of the Azov fortress in Southern Russia, which was occupied by the Turkish army. Feeding four thousand Cossacks in a camp was problematic, so they collected anything edible they could find and threw it all together. Everyone liked this thick and nourishing mix of vegetables and meat, and came up with the name borshch, supposedly making an anagram of a popular fish soup called “shcherba”.

Other sources suggest the name came either from the plant borshchevik – one of the key ingredients of the older-time borshch, or from the word brshch, which meant beet in Old Slavonic. The beet is of course the vegetable honored to make up the basis of the classic borshch. 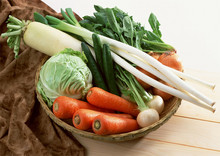 Despite its centuries-long history, there is no consistent recipe for borshch. Each Russian family cooks it in its own way, passing on the secret from one generation to another. The most important thing about preparation is that the soup must be both fiery red and clear, with the fat on the surface slightly orange. Commonly this course is made in a big pot to feed everybody for several days. Impressively, it seems only more delicious the next day.

A classic borshch formula includes beetroot, cabbage, potato, onion, carrot, tomatoes, garlic, rib of pork and what is most important – mature bacon. These ingredients are usually long-stored and contain all necessary nutrients. People in some Russian regions make a special sauce, which is used as the base for cooking borshch all year round. Shortly before serving, one can put a spoon of sour cream and chopped fresh greens into the plate.

There are also vegetarian, tomato paste-based, orange and green (“zelyony” in Russian) borshch or sorrel soup available. Trenchermen can taste chicken, apples and even white wine among the ingredients. In times of mass flu epidemics, this soup is irreplaceable not only due to the variety of vitamins it contains, but also as an efficient antimicrobial because of the garlic, pepper and onion. And finally, if you want a smart and easy diet, eat nothing except borshch at dinner - and enjoy quick results!

Written by Evgenia Skorchenko for RT