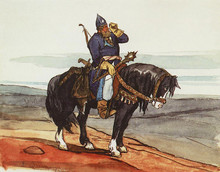 Bogatyr is a term applied to warriors in Ancient Rus. Bogatyri are the main characters of ancient epic folk stories - byliny - that were passed on verbally from one generation to another. The origin of this word (byl’ means reality in Russian) suggests that most of these heroes existed in real life. As for the word bogatyr, many researchers are divided on its origins. Some say that it sprang from the Tatar words – bagatyr and batyr, meaning “warrior”; others point to the Sanskrit word baghadhara meaning “somebody that possesses happiness and luck.”

However, all the heroic deeds of the bogatyri were hyperbolized and the heroes were often attributed divine powers and strength. The bogatyri always did their best to protect the Russian land against all kinds of invaders – both real and fictitious.

If you adapt the plot to modern realities it would look something like this: a peasant by the name of Ilya sits for 33 years at home, doing nothing (all coincidences of age are purely incidental). Suddenly a bunch of wizards appear in the village and give him strength. After some time, Ilya goes to Svyatogor – a giant man who is so big that he can’t even sit and must lie on his back. The giant urges the peasant to go to Kiev – the main city of Rus - to serve Prince Vladimir.

So what does young peasant do? He plans his journey – 1500 kilometers on horseback from his native city of Murom to Kiev in six hours. But he fails to make it according to schedule: halfway through he fights with the most notorious mobster of the forest – Solovei-Razboinik (Nightingale the Robber) who uses all his natural superpowers to crush Ilya. Nevertheless, the strong and brave peasant from Murom defeats him and makes it to Kiev only three hours behind schedule. Here he gets on good terms with Prince Vladimir.

A plot for a Hollywood blockbuster? Some talented director might consider it. But it’s only a small episode from the byliny about Ilya Muromets – one of the most well known Russian bogatyri. Some historians say that the hero really lived in the 12th century, though his name has never been found in the Chronicles. Other researchers point to similarities with Ilya Pechersky - one of the key priests in the Kiev Pechersky monastery inside the caves on the hills above the Dnieper River. Legends praised Ilya for his physical and spiritual powers as well as for his love of his homeland and people.

He became a part of the famous “Bogatyri trio” that also included Dobrynya Nikitich and Alyosha Popovich.

Many historians think the character of Dobrynya Nikitich was copied from a real person who was the uncle of Kiev Prince Vladimir. The real Dobrynya was a symbol of courage when it came time to taking tough decisions and fighting treacherous battles. As for the byliny Dobrynya, he was also a brave man with superhuman powers. One of his most notorious victims was Zmey Gorynych (a.k.a. Russian Dragon), a green creature with three heads that walked on two back paws and spit fire. In all the byliny dragons and other “bad guys” symbolized Mongols and other folks who were a real threat to the Slavs from the east.

Alyosha Popovich – the youngest of the trio – was sly and hot-tempered. Like Dobrynya, Alyosha defeated his own nemesis – Tugarin, who symbolized the tribes that lived in the steppes to the south of Ancient Rus.

Each bogatyr was given a specific feature that ran through various byliny. For Ilya Muromets, it was physical strength – he was the “second in rating” after Svyatogor. Dobrynya was also strong and brave but moreover he was a good negotiator. That is why Prince Vladimir sent him on several diplomatic missions. Alyosha’s wit is mentioned in several legends. Here’s a phrase that says it all about him: “If he can’t take it by strength, he’ll do it with his wit.” 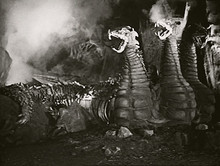 The famous three – Ilya, Dobrynya and Alyosha – also became the main characters in one of the most famous Russian paintings – “Bogatyri” by Viktor Vasnetsov (1898). However, for many generations they were “the junior ones” because legends about them became known only after Prince Vladimir introduced Christianity. Before that byliny about bogatyri were a manifestation of the Ancient Slavs’ pagan religious views. Researchers called these bogatyri “seniors.”

The most monumental, as already been mentioned, was Svyatogor. His name may be literally translated as “sacred mountain.” He was a symbol of natural force. He was so big that he could hardly stand on his feet in his old age.

Other famous “senior” bogatyri are:

- Mikula Selyaninovich. His second name comes from the Russian word “selo” (which means village). His main merits were strength and endurance;

- Volga Svyatoslavovich. He was of noble descent. Though some say that he originated from a snake (a Russian werewolf). He is famous for his standoff with Mikula. He is the first bogatyr to travel as far as India.

All these bogatyri represented Kiev. However, the stronghold of the Slavic North, the city of Novgorod, also had its heroes. One of the most famous from this “gang” is Sadko – the musician turned merchant who got rich thanks to his connections with the “Tsar of the Sea.” He is said to have established trade with various countries. Another bogatyr was Vasily Buslaev, a powerful street fighter. His story tells us a lot about the political struggle in the city of Novgorod between noblemen and supporters of the city’s independence. However, these bogatyri do not perform any heroic deeds like their colleagues from Kiev. Historians explain this by the fact that Novgorod did not experience any nomadic invasions – when the Tatars conquered Ancient Rus, they never came close to the city.

Byliny – tales about bogatyri – were of great interest to Russian historians in the 19th century. However, they could process only a small percentage of the ancient Slavic heritage. In the middle of the 20th century many Russian cartoon directors turned to the theme of bogatyri. The animated films won the hearts and minds of Soviet children and their parents.

In modern Russian the word “bogatyr” means “a strong person.”