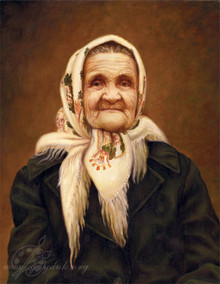 Babushka, or granny, is the mother of a person's father or mother, but in this country the word has numerous shades of meanings. The very word babushka is a diminutive-hypocoristic form of the word baba – an ancient Russian word denoting a married woman. It is not by chance that today the word has acquired its pet suffix – it is in fact an illustration of just how special babushkas are to Russians.

Due to the ongoing housing shortage but also as a tribute to tradition, quite often in Russia several generations live together under the same roof and babushkas play a very significant role in such extended families.

There is a conventional assumption that all babushkas, regardless of age, social position and ideology, are perfect at cooking, enjoy taking care of their grandchildren and have a dacha where they spend the whole summer growing vegetables, making kompots and preparing delicious jams to be eaten on long winter evenings. However stereotypical the assumption, it still proves true more often than not.

Another distinction of all babushkas is a certain emotionalism and a permanent desire to stuff their relatives in general and grandchildren in particular to the bursting point. Whenever a babushka sees her grandson or granddaughter after a short separation she is usually horrified at how her loved one has thinned down and become pale and is all too eager to wine and dine the poor child.

When a baby appears in the family, the newly-minted granny immediately shows her willingness to take care of the baby for one clear reason: “she knows best.” It is no good trying to argue with her, it is just one of those things babushkas always do in Russia.

The word babushka also denotes any elderly woman, taking no notice of family connections. Babushkas in Russia seem to represent a totally independent part of society - they know everything and are good at giving a piece of advice whether you’ve asked for it or not.

It is considered to be a display of good breeding to assist the elderly in the street – to carry a heavy bag, for example, or to give them your seat on the public transport. Children are taught from a very early age to respect babushkas and do their best to help them. Still, Russian babushkas have never lacked self-confidence and are ready to remind you of the rules if you fail to toe the line yourself. 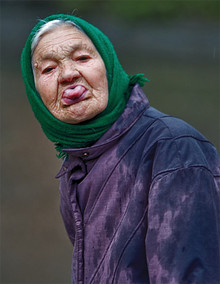 Babushkas play such an important role in Russian society that it is not surprising at all that they are mentioned in a number of proverbs, sayings and other examples of oral folk arts.

One example is the proverb, “There you have it, Granny, the Yury's Day,” referring to a promise that is not kept. The “Yury’s Day” is the Russian name for each of the two feasts of Saint George celebrated by the Russian Orthodox Church on 6 May and 9 December. The Law Code of 1497 established a two-week period around Yury's Day (a week before the feast and a week after) as the only times of the year when Russian serfs were free to move from one landowner to another. Sometimes, and unfortunately quite often, they were denied this right even on these dates, giving rise to the proverb.

Another well-known proverb in Russia goes like this: “Even your grandma wouldn't know whether it'll rain or snow,” meaning that an outcome or a result is uncertain or unpredictable.

Still another example is as follows: “The one to whom the granny tells fortunes, lives a happy life.” It is advisable to use the proverb when talking about an immensely lucky person.

There are more proverbs and sayings that refer to babushkas, but these are the most famous and frequently used, illustrating the irreplaceability of babushkas in the Russian language and culture as well as in the lives of Russian citizens, whether consciously or subconsciously.

Collectivization Collectivization was a policy of forced consolidation of individual peasant households into collective farms called “kolkhozes” carried out in 1920's - 1930’s.