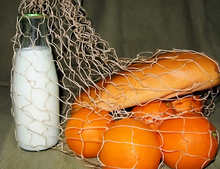 
Avoska – or rather avos’ka with a soft “s” – is a Russian-only word used to describe a string bag that resembles a basketball net. The space-saving bag was designed and widely used in the country during Soviet times. The avoska – an “accessory” for both women and men – easily fit in a lady’s handbag or in a man’s case and could be unfolded in a grocery store.

The first reference to the string bag as an avoska dates back to 1935, when the then highly popular comedian Arkady Raikin read a monologue holding the rank-and-file bag. The root of the word - avos’ - means “maybe” in Russian. It is widely used in traditional Russian fairytales and fables, probably just as widely as the expression “once upon a time.”

The word, which would just mean uncertainty in any other language, had a wider meaning in the USSR. When most things were hard to come by and there was a deficit of certain products even in grocery stores – the avoska was a kind of scoop-net. 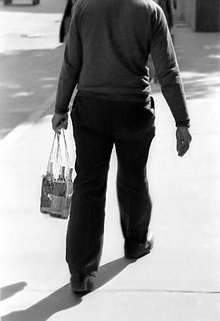 People took it with them in the morning just in case, they might catch a certain goody by the end of the day. Arkady Raikin played with the etymology of the word, describing the string bag as a “maybe-bag” – “Here’s my maybe-bag. Maybe I’ll get something into it…”

What's in a bag

Knitted of ropes, an avoska is an environmentally friendly accessory. Modern look-a-likes of the avoska are cotton bags, which are produced and designed by a number of companies to raise people’s awareness to preserving the environment. Primitive Soviet-time avoskas are a far cry from modern cotton or plastic bags. The biggest drawback of the avoska is that everyone can see through it.

The items most commonly carried in an avoska in the USSR were loafs of bread, bottles of milk or kefir and oranges – most of the old cartoons reflect these very images. They were also widely used to carry alcoholic drinks in bottles, stirring jealousy among neighbours.

You wouldn’t come across a person walking around with a string bag in modern Russia. Avoskas have long become a thing of the past. However, as a word it is still used to describe a shabby nylon or plastic bag that only a person with no taste would take out into the street. Avoska has a rather negative meaning. It tends to mean something big, shapeless, untidy, something very much out of place in a person’s looks.