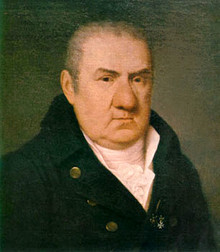 Giacomo Antonio Quarenghi was the foremost and most prolific practitioner of Palladian architecture in Imperial Russia, particularly in St. Petersburg.  After intensive studies in art and literature in Rome, Quarenghi eventually found his calling after reading Andrea Palladio’s book on architecture, Quattro Libri d'archittetura.  Heavily influenced by the book, Quarenghi devoted his life to architecture in the Palladian style, and became one of Europe’s best practitioners of what is now known as “Neoclassicist”, or “Palladian” architecture.  After gaining a wide reputation and fame throughout Europe and England, he was invited to become one of Russia’s imperial architects by Catherine II.  Leaving Italy for his new homeland, he would eventually construct several impressive and magnificent structures for the imperial royal family as one of Russia’s most prolific and successful architects.

Quarenghi was born in 1744 a small town near the Italian village of Bergamo into a noble family that had been famous in Italy since 12th century.  As a young student, Quarenghi was extremely fond of literature and showed a great aptitude for painting.  As a result, Quarenghi was fortunate enough to be sent to Rome in 1763 for his studies, which at that time was considered the center of artistic Italian life.

It was in Rome that Quarenghi would begin to study architecture.  At that time, Neoclassicism was extremely popular and being rapidly developed in the advanced roman artistic community, and Quarenghi fell heavily under its influence.  Neoclassicism was a style heavily influenced by the symmetrical and balanced aspects of the art of Ancient Greece, as well as the Renaissance.  As such, Quarenghi studied painting and architecture under several masters, and was noted for being an exceptionally diligent student.  He travelled around Italy, studying the painting and architecture of antiquity and the Renaissance.

It was at this point in his studies in 1769 that he was introduced to Andrea Palladio's Quattro Libri d'archittetura, a work comprised of four volumes published in 1570 that was a centerpiece and sourcebook for the neoclassicist architectural movement; Palladianism was famous for its heavy ancient Greek influence and immense emphasis on symmetry.  Quarenghi would write to one of his friends “You could never believe the impression that this book made. Then it struck me that I had every reason to consider myself badly guided [up to that point]”.

It was at this point that Quarenghi’s career as an architect began to take shape.  While studying the works of Palladio in Venice, Quarenghi was approached by a British lord who had seen some of his projects and work as a student.The lord was impressed, and gave Quarenghi a commission to work on various minor English projects mainly consisting of private pavilions, chimneys, and other private property.  Eventually, Quarenghi would gain his first major commission; in 1771 he was hired to oversee the internal reconstruction of the monastery of Santa Scholastica at Subiaco.By 1779, Quarenghi had already assembled an impressive resume of free-lance work as an architect in Italy and England, but Quarenghi remained ambitious.  He was in search of even greater opportunities and recognition in his chosen craft when he was approached by Count Riffenstein, an ambassador of Catherine II of Russia.  Catherine was in search of new Italian architects to work on a number of projects in the heart of Imperial Russia, and Quarenghi accepted the position offered him immediately, moving with his family to St. Petersburg in the end of 1779.  He was given the title of official architect of the court.

Work under Catherine II in Russia

Upon arriving in Russia, Quarenghi was put to work immediately designing the English Park at the Royal Summer Palace at Peterhof.He would then construct the Alexander Palace, an even more ambitious project, as well as design several hospitals, theaters, banks and gardens.Quarenghi was prolific in his output of designs and projects, as he wrote home in 1783 “I have so much work to do, I barely find time to eat and sleep. I can say without exaggeration that among the many buildings commissioned by the Empress to be designed by me, and for me to construct, there is not a single one that would not demand the dedication of an entire man.”

Quarenghi was so prolific it is hard to dispute his words.He would undertake approximately 16 different projects in St. Petersburg alone during his career, including the construction of the Russian Academy of Sciences, the Hermitage Theater, and the Alexander Palace.His designs and projects were realized in Moscow and as far away as the Ukraine.Several of them survive to this day.

In 1812, in light of the upcoming invasion of Russia by Napoleon, the King of Italy (at the time a Napoleonic satellite kingdom) issued a decree that all Italians living in Russia were to return to Italy immediately.Quarenghi defied the Italian King’s order in favor of his new home of 33 years and so much success, but at a cost; his family’s land and title were stripped from them and confiscated, and Quarenghi was sentenced to death by his own King for his defiance.Quarenghi lost forever the opportunity to return to his native Italy.However, Quarenghi’s rejection of his homeland would in turn gain him a new one.Quarenghi was rewarded for his loyalty to Russia by being granted the status of a Russian Noble, and was awarded the Order of St. Vladimir of the First Order in 1814.   After the triumphant return of the Russian army to St. Petersburg, the 70-year-old Quarenghi began construction on the Triumph Gates at Narva, and an “1812 Memorial Church”.However, Quarenghi would not live to complete the latter project; he died on March 2, 1817, at the age of 73.  Prodigious, prolific, and good-natured, much of Quarenghi’s work has survived to this day, greatly influencing the world of Russian architecture and art.