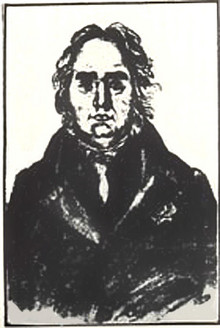 Gerhard Friedrich Muller (Fyodor Ivanovich) was a widely renowned Russian historian and professor of the Imperial Petersburg Academy of Sciences.  He is most famously known for participating as a member of the specially picked team of three scientists in the Great Northern Expedition to Kamchatka (which would eventually result in the first European landing in Alaska by Vitus Bering) and his ethnographical theories that brought him into fierce conflict with many of his scientific peers, including the famous academic, Mikhail Lomonosov.  After his 10-year journey through Siberia, the massive amounts of work he compiled and published remain an invaluable and thorough source of information on the history and development of the Russian people to this day.

Early education and invitation to the Academy:

Gerhard Muller was born in Westfalia, Germany into a family of scientists.  After completing his studies in the gymnasium in 1722, Muller applied to the university at Rinteln, and from 1724-1725 studied philosophy at the University of Leipzig, where he excelled in his studies and received a baccalaureate degree.  It was his work in philosophy and history that earned him the attention of Peter the Great, who had just founded his Petersburg Academy of Sciences in 1724.  Peter was intent on bringing some of Europe’s first and foremost thinkers to take up residence at the academy, thereby putting Russia on the European intellectual map.  Muller was invited to join the Academy and arrived in Russia in November of 1725.  He quickly rose through the ranks, becoming one of the leading professors at the Academy, gaining much notoriety for the thoroughness of his ethnographical and historical studies, as well as his occasionally difficult character.

The Petersburg Academy and the Saint-Petersburg Gazette:

While beginning his teaching career at the Academy gymnasium, he was an assistant to the famous academy librarian Ivan Schumaker, and participated in organizing the archives and the library of the Academy of Sciences.  In 1728, the Academy began publishing the first Russian literary and popular science magazine, the “Saint-Petersburg Gazette”.  Muller founded an appendix to the publication, which he entitled “Monthly historical, genealogical, and geographical notes”, which in turn was so popular that in 1730, Muller was selected as a professor of the Academy to be sent abroad on tour to raise its prestige in Europe.  Upon his return in 1732, Muller began compiling his plans for the study and publication of the most important historical sources of information on the history of Russia.

In 1733 Muller was selected to join the academic team of the great Kamchatka Expedition, and journeyed to Siberia, where over the course of ten years he studied documents from the local archives, as well as collected some of the most definitive geographic, ethnographic, and linguistic information on the history of Siberia.  He gathered large collections of original documents, as well as hundreds of copies of unique historical documents from the 16th -17th centuries, which to this day represent a highly valuable source of information of the history of Russia.  He also wrote his first independent scientific works, compiled dictionaries of the local languages, and completely mastered the Russian language.

Muller’s departure in 1733 from Saint Petersburg was not only dictated by his desire to further his studies and theories about the history of the development of the Russian people, however.  Many also suspected that due to his haughty character and conflictive personality, the Kamchatka Expedition also presented to him a chance to leave Petersburg and the academic conflicts surrounding him.  These problems were destined to continue to haunt Muller upon his return.  Even some of his old colleagues would eventually come to denounce his work.

Scientific conflict and scandal: the return to Saint Petersburg

Upon his return to Saint Petersburg in 1743, Muller set about the task of developing and editing the materials he had collected into what would become the greatest and biggest project of his life – the many volumes of ‘The history of Siberia’.  However, his relationship with the leaders of the Petersburg Academy, in particular Schumaker (once his mentor in the library), had taken on a warlike nature.  Also on the attack was the famous Lomonosov, who accused the historian of disloyalty to Russia.  The conflict reached its peak in 1749, when Muller’s dissertation ‘On the lineage of names and the Russian people’ was published.  Muller’s paper developed the ‘Normanist theory’ which essentially proposed that the ancient Slavic tribes had invited the northern, Scandinavian ‘Rus’ tribes to govern over them for lack of ability to govern themselves. Considering Russia’s unpopular and tense relationship with Sweden at the time, criticism of Muller was harsh.  Lomonosov said in his attacks that “In all his [Muller’s] speeches, there is never any mention of any great achievement of the Russian people, but rather he reminds us of that which only serves to embarrass, specifically: how they several times beat each other in fights, where they robbed their own kings of their treasures with thievery, flame, and swords.  And in parting [he leaves us] a noble surprise, where he recklessly uses the expression that the Scandinavians with their victorious arms successfully conquered all of Russia.”  The intensity of the controversy dented Muller’s career for a number of years.

Later, despite of the fierce debate and rejection of many of his theories, Muller was named conference secretary of the Academy of Sciences in 1754, and in 1755, he was awarded the job of editor of the scientific journal “Monthly Writings”, which had published the works and materials of the most widely known representatives of Russian culture and science.  The journal under Muller’s guidance was destined to play a large role in the development of Russian national journalism.

Move to Moscow, and legacy

Eventually, the large amount of administrative duties and the controversy surrounding Muller at the Academy prompted Muller to ask Catherine II to transfer him to the position of Main Warden of the Moscow Orphanage. Shortly thereafter, he was transferred to service at the Moscow Archive of the College of Foreign Affairs, where he worked until the end of his life after eventually becoming its director.

Muller’s theories, the massive amount of collected materials, and his publications continue to be discussed to this day, and it was under his editorship and tutelage that works by several of Russia’s later leading scientists were to be released. Muller’s work as a pioneering explorer, historian, ethnographer and editor has cemented his place in the history of Russia’s intellectual elite.