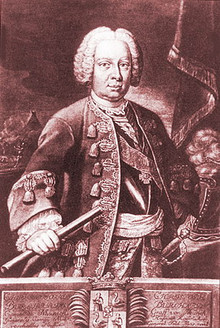 Count Burkhard Christoph von Münnich was a general-field marshal and an engineer in the Russian Army.  Although he was born in Germany, the majority of his accomplishments occurred while in the Russian service.  His many achievements include the construction of several canals in and around St. Petersburg, numerous military reforms during his tenure as head of the Russian war college, and even leading an army of fifty thousand Russian soldiers against the Turks in the Crimea.  Münnich might have proven even more beneficial for Russia, but his hunger for power and involvement in clandestine political intrigues in the Tsar’s court would forever change his destiny, leaving history to wonder at his unused potential.

A family of engineers, invitation to Russia

Münnich was born in Oldenburg into a family of engineers who all specialized in hydro-engineering.  From 1700 to 1720, he served as an engineer in the French, Hesse-Darmstadt, Hesse-Kassel, and Polish-Saxon armies.  Under the command of prince Eugene of Savoy and the Duke of Marlboro, he participated in many military campaigns in Europe which gave him combat experience.  InGermanyhereceivedtherankofColonel, and in Poland was awarded the rank of Major General by the King of Poland Augustus II.

In 1721, the Russian ambassador to Poland Dolgorukov invited Münnich to St. Petersburg to complete technical engineering projects that hadbeen planned by Peter the Great.  When Münnich presented the Tsar with his plans to fortify the port town of Kronstadt in the Gulf of Finland, the satisfied Peter said “Thank you Dolgorukov! This man has brought me a skilled engineer and a general.”  Münnich’s assignments included the organization and construction of shipping lanes in the Neva river, roadwork across St. Petersburg, the construction of the Baltic Port, and the construction of the Ladoga Canal, one the first major canal projects in Russia.  Münnich’s successful completion of these various projects brought him the deep respect of the Tsar.  In 1722 he was made a lieutenant-general, and in 1726 under the rule of Catherine I general-in-chief and awarded the order of Aleksandr Nevsky.  In 1728 he was made a Count, and the general-governor of Ingria, Karelia, and Finland.

Army reforms and invasion of the Crimea

After the rise of Empress Anna Ioannovna to power in 1730, Münnich was named the president of the war college, and awarded the rank of general-field-marshal.  He fully justified his new prestigious titles by introducing several reforms into the Russian military.  Münnich educated two new regimental guards, oversaw a reorganization of the army, and employed educational reforms in the war college; he founded a cadet corps in St. Petersburg, “so that they may find from 400 to 500 young noblemen and officer’s children to rear and teach them in the physical and war exercises, as well as foreign languages, art, and sciences.”  He would look after the corps for a long time.  He also created the first Hussar corps, as well as made the pay for native Russian soldiers the same as invited foreign soldiers.  These, as well as other reforms drastically improved the condition of the Russian army.

However, Münnich had also developed a great thirst for power.  He became involved in the secret struggles between other various foreign officers and nobles who were constantly vying for a position of influence over the rulers of Russia.  In these instances, rivals could quickly become allies, and just as quickly go back to being rivals once more.  Among Münnich’s circle of shifting friendships and competitors were Baron Andrey Osterman (who would eventually briefly hold the title of vice-chancellor of Russia) and the Duke Ernst Johann von Biron (who would eventually become a short-lived regent of Russia).  These three would often be caught in a balancing act, each trying to outwit the others in a deadly game to see who could gain the most influence in the Russian court.

Münnich’s desire to overshadow his rivals led him to undertake several military campaigns.  In 1734, he laid siege to and successfully took the city of Danzig in Poland.  In 1735, it was decided to declare war on Turkey in a war of vengeance against the Crimean Tatars for their advances on Russian soil.  Münnich’s ambition to overshadow Biron and Osterman led him to take the post of main commander in the war.  He organized the siege of Azov and Ochakov fortresses in the first weeks of the war, and the field-marshal moved with an army of fifty thousand towards Perekop, the fortress that served as the gateway to the Crimea from Russia.  After a tiring march, on the 21st of May his army stormed Perekop and successfully penetrated Crimean territory.  Though the approach taken by Münnich and his troops was difficult and exhausting, the results were dramatically victorious.  Kozlov (now Yevpatoria), Akhmechet, Kinburn, and the capital of the Crimean Khanate Bakhchisaray were all taken.

Shifting alliances and exile to Siberia

After the death of Anna Ioannovna in 1740, there were radical changes in Münnich’s life.  Anna Ioannovna’s chosen successor to the throne was Ivan VI, however, at the time of the Empress’s death, Ivan was only an infant.  Anna Ioannovna therefore named Münnich and Osterman’s rival Biron regent of Russia until Ivan VI could assume the throne.  However, Biron’s regency lasted only three weeks.  Together, Osterman and Münnich were able to alienate Biron by seizing him and putting him on trial.  Though sentenced to death, he was instead banished to Pelym, Siberia, for the rest of his life (he would later receive a pardon and return to the court). Anna Leopoldovna, the mother of Ivan VI, was installed as regent in November of 1740, although Osterman essentially ran the government.  However, this position also proved untenable for Münnich and Osterman.

In December 1741, Anna Leopoldovna was overthrown by ElizavetaPetrovna.  Münnich and Osterman were tried and sentenced to the death penalty under false accusations of bribery and embezzlement.As he left the fortress and approached the place of his execution, Münnich kept in high spirits, spoke with the officers accompanying him, remembering his war experiences and the habits of a soldier that is used to death.  As he ascended the scaffold, he heard a new order:  the execution had been stayed in exchange for exile to Siberia.  He was sent to the city of Pelym, sharing the fate of his one-time rivalBiron.

Münnich lived in Pelym twenty long years; not giving into time, he engaged in physical and mental activities, taught children, and created various engineering and war projects without any way of implementing them.

In 1762, Peter III returned the 78 year old Münnich to Petersburg, returning to him his titles and awards.  Out of a sense of thankfulness to his liberator, the old field-marshal tried to help the Tsar escape to Revel (now present day Tallinn) when the court turned in favor of Catherine II the Great.  However, he was later forgiven by Catherine and swore an oath of allegiance to her.

Münnich fervently continued his duties into his old age, and the ports of Revel and Kronstadt as well as the Baltic Port and Ladoga canal were all placed under his administration.  “Sleep hardly touches my eyes,” he wrote the Empress, “I close my eyes with different plans, and when I open my eyes again, I merely apply my thoughts to them.”  In his letters to Catherine, Münnich repeatedly recommended that she start a new war against the Turks and the Crimean Tartars, in order to complete their efforts to retake the Crimea started by Münnich 30 years ago.  However, he did not live to see his advice fulfilled.  He died one year before Catherine heeded his advice at the age of 84.