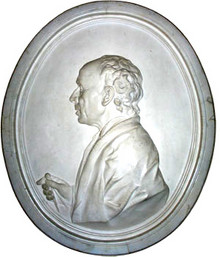 Antonio Rinaldi was a famous Italian architect who taught and worked extensively in St. Petersburg for over thirty years during his career, even becoming the royal architect of the court under Catherine the Great in 1762.  Rinaldi’s time in St. Petersburg was prolific and his tenure as official architect of the court extremely successful; He designed and worked in the popular traditions of neoclassicism and baroque, while maintaining a skill and style all his own.  Rinaldi’s handiwork and craftsmanship was easily recognizable throughout the city of St.Petersburg, and one would even encounter the phrase “like a flower of Rinaldi” in contemporary literature.  As a result of his success, several of his projects have survived to this day.

Antonio Rinaldi was born around 1709 in Italy, however the exact place of his birth is unknown.  However, it is likely that Antonio was born into a relatively wealthy and noble family from the south of the country, as his mentor Luigi Vanvitelli in Naples was known for only taking pupils from the surrounding countryside.  Luigi Vanvitelli was then and now regarded to be one of the most visible and famous Italian architects of the 18th century; his late baroque style essentially paved the way for the later neoclassicist architects and artists.  Training under Vanvitelli would have a significant impact on the later work, style, and career of Rinaldi.

Vanvitelli’s students, including Antonio, participated in a number of the great master’s projects as a necessary part of their practical education. Already a full architect by 1740-45, Rinaldi supervised the construction of the church in the St. Magdalene Monastery in Pesaro as originally designed by Vanvitelli. 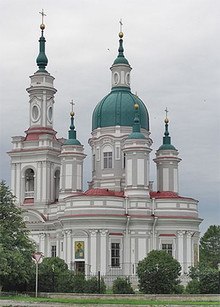 Rinaldi was one of many Italian architects who found a home for their creativity in Russia, and was originally invited to serve as architect to the Hetman (a position of Ukrainian nobility) Razumovsky, the brother of the Empress Elizaveta Petrovna.  The terms of Rinaldi’s service to the Hetman in the royal family were outlined in the letters between the Hetman and Count Vorontzov, a Russian nobleman who had recommended the Italian’s services.  Rinaldi’s contract had six main points which can be ascertained by examining the correspondence between the two nobles.  The term of service was to be seven years, Rinaldi was obligated to teach Russian students the art of architecture, he was to receive a yearly pension of 1200 rubles, and travel to and from Russia from Italy was to be paid for by Razumovsky.  As a sub-clause in Rinaldi’s contract, it was understood that it was Rinaldi’s responsibility to provide his own travel to Ukraine, where his original projects were due to be completed.  By 1754, Rinaldi was in Russia.

By being closely affiliated with the royal family, Rinaldi found himself in a very advantageous position.  By 1761, Rinaldi already held the position of personal court architect to the heir of the throne.  It is also interesting to note that Rinaldi called himself the architect of “The Great Duchess”, referring to Catherine II, who would eventually become known as Empress Catherine the Great.  According to his letters, Rinaldi was already receiving 1500 rubles a year for his services.  He was also being provided with his own servants, a home, and “…wonderful gifts, depending upon the work he was doing.”  Antonio’s mentor Vanvitelli wrote in a letter dated 1762 that the death of Elizabeth Petrovna was “a very big stroke of luck for Senior Antonio Rinaldi, as the Great Duchess, who he has also served, is now the heiress to the throne which she is now commanding, and she is young and will live many years.”

Vanvitelli’s words proved prophetic, and after the coronation of Catherine II, Rinaldi became the leading architect of St. Petersburg.  He would design and build palaces, triumphal gates, arches, churches, theaters and many different buildings, becoming a dominant architectural presence in the center of the city.  At the same time, Rinaldi would reveal himself to be an equally talented designer at the Oranienbaum and Gatchina Surburbs, working on palaces in both royal summer homes.

Rinaldi is responsible for the Palace of Peter III, the Chinese Palace of Catherine the Great, and the Roller-Coaster Pavilion at Oranienbaum; The Great Gatchina Palace; The Marble Palace, The Prince Vladimir Cathedral, and The Catholic Church of St. Catherine in St. Petersburg, just to name a few.  The list of Rinaldi’s achievements can be expanded even further to include his work before he was named official architect of St. Petersburg by adding his extensive work in Italy and Ukraine.

Rinaldi would spend more than thirty years full of intense and diverse work throughout Russia.  His age notwithstanding, he was full of energy and would have been able to oversee many more projects before his departure. However, there is a legend about Rinaldi that while unconfirmed, may have hastened his departure from his new home of St. Petersburg.  Legend has it that an unfortunate accident occurred while surveying his Bolshoi Theater in St. Petersburg:  Rinaldi fell from the scaffolding.  After selling his home in 1784, he left for Rome.  The architect was given a lifetime pension of 1000 rubles a year which he collected from the Russian consulate in Rome.  The last ten years of his life he lived under the care of his nephew Santino Rinaldi, and the architect attempted to systematize his projects and blueprints.  Rinaldi died April 10th, 1794 in the city of Rome at the age of 85, but his presence in St. Petersburg continues to be felt, forever leaving his stamp on the city.