Foreigners in Russia: Aloisio the New 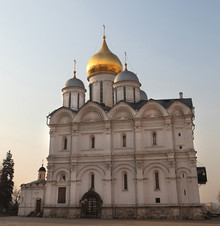 Aloisio the New(known in Russia as Aleviz Novy, or Aleviz Fryazin) was an Italian architect working in Moscow and in Russia at the beginning of the 16th century.  He was the master architect and designer of several churches across Russia, but the most famous of his projects is the Archangel Cathedral in the Kremlin.  Ivan III of the Moscow Principality had already invested heavily in renovating the Kremlin, preparing it to become the seat of the future Moscow Tsardom. Based on his previous positive experiences with Italian architects, he sent out for one more group of master craftsmen to rebuild the Archangel Church within the Kremlin walls.  The architect entrusted with the responsibility of renovating the Cathedral to stand the test of time was Aloisio the New.

Very little is known about the life of Aloisio the New in Italy.  Reports are even varied as to his place of origin, with some sources saying he was actually the Venetian sculptor Alevisio Lamberti da Montagnano, and some sources saying he was originally from Milan.  However, despite numerous theories, Aloisio’s origins remain shrouded in mystery.  What is known is that he set out for Moscow with a group of Italian master artisans and architects in 1499 at the invitation of Ivan III.

Aloisio arrived in Russia bearing the name Aloisio Fryazin.  However, there was already another Italian architect working in Russia by the name of Aloisio Fryazin.  The previous Aloisio had arrived a full ten years prior, and in order to avoid confusion, the two were referred to from then on as Aloisio Novy (or Aloisio the New), and Aloisio Stary (or Aloisio the Old).  Considering the surname “Fryazin” was a common name applied to several foreigners in Russia of Italian descent, the picture of Aloisio the New’s background becomes even less clear.

Travel to Russia and an unexpected detour

Ivan III had already completed several reconstruction and renovation projects inside the Kremlin, and towards the end of his reign, had his sights set on rebuilding the Archangel Cathedral located on Sobornaya (or Cathedral) Square inside his newly constructed Kremlin walls.  Ivan remembered the positive experience he had approximately twenty years earlier with Italian architect Aristotele Fioravanti’s work on rebuilding the nearby Dormition (or Assumption) Cathedral, and he set out looking for an architect who could provide similar successful results on the Archangel Cathedral project.  He sent his ambassadors to Italy in search of Architects and artisans once more as he had done before.  The man they found for the job was Aloisio the New.

The convoy with Aloisio and over Italian architects that set out for Russia in 1499 was supposed to arrive at its destination years earlier, however, fate would have it that the group of artisans was detained in the Crimea by Khan Meñli I Giray, who put the Italians to work on the construction of his court.  Once again, the details of the period of time spent in the Crimea are unclear, but after Aloisio the New had finished construction on the Khan’s project, he and the other artisans were allowed to proceed to Moscow, complete with a letter of extremely high recommendation from the Khan, proclaiming Aloisio an extremely talented architect worthy of any King.  Today, only one wall of the structure remains standing in the city of Bakchisaray, in current day Ukraine.

Although work on the Archangel Cathedral only took three years, Grand Prince Ivan III would not live to see its completion.  He died in the autumn of 1505, the same year that construction began on the Cathedral, and was buried in the unfinished building.  This would become a tradition with the Archangel Cathedral; it would serve as the Royal necropolis until Peter the Great moved the royal burial site to St. Petersburg in.  Interred in the Cathedral are 95 members of the Russian royal family.

While the structure of the Cathedral was completed in 1508, the intricate frescoes and interior decorations of the Cathedral were not painted until the 1560’s, and decorations would be added to the interior over the course of the next hundred years.  The frescoes on the interior depicting the history of the various Princes and Tsars of Russia are considered to be masterpieces of Russian art.

Aloisio is last mentioned in documents pertaining to the construction of a monastery that he had been working on in 1514.  Afterwards, there are no further references to Aloisio the New.

While the Archangel Cathedral remains Aloisio the New’s most significant contribution to Russian architecture, in recent days, several historians and scholars have tried to attribute a significant number of other works across Russia to the Italian artisan.  However, because of Aloisio’s opaque origins, most of these theories remain impossible to confirm.  The Archangel Cathedral remains his centerpiece, resting place of the royal family of Russia and a magnificent addition to the Kremlin’s Sobornaya Square.

Count Montfort Count Montfort was a French nobleman who immigrated to Russia and served as the first tutor and governor to Aleksandr Pushkin, arguably the greatest Russian poet,