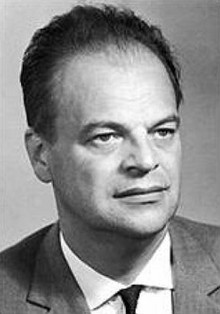 Nikolay Basov was a Soviet physicist and Nobel Prize winner for research leading to the development of the MASER and laser.  He shared the prize with two other scientists – Aleksandr Prokhorov and Charles Townes.

Nikolay Basov was born on December 14, 1922, in the small town of Usman near Voronezh, Central Russia, to Gennady Basov and Zinaida Molchanova.  His father was a professor at the Voronezh Forest Institute and studied the influence of forest belts on underground waters and surface drainage.

After graduating from school in 1941, Basov was called up for military service in the Red Army. The Soviet Union was at war with Germany, and Basov went to train for doctor assistant’s qualification at the Kuibyshev Military Medical Academy. He then went to fight on the First Ukrainian Front.  Later he remembered an incident from his medical career, “At one point the soldiers were digging trenches.  It was hard work, and one of them had appendicitis.  He needed surgery, and I’d seen this kind of surgery performed only once, while helping the doctor, handing him different instruments.  So I had four soldiers hold a sheet over us, to protect us from the falling earth and sand, gave my patient half a glass of spirit for anesthesia and performed the surgery!  By the way – he is still alive and well to this day.”

For the Love of Physics

After the war, Basov was demobilized and entered the Moscow Engineering Physics Institute to study physics. While in his third year, he took a part-time job in the laboratories of the Lebedev Physical Institute. After he got his diploma, he resumed his studies at the Lebedev Institute, where he worked and furthered his education under the guidance of prominent professor Aleksandr Prokhorov.

In 1953 he graduated with a Doctorate in Physics and Mathematics.  His thesis was dedicated to the molecular oscillator, which summed up the theoretical and experimental work on the creation of a molecular oscillator utilizing an ammonia beam.  He then stayed to work at the Lebedev Institute and founded the laboratory of quantum radio physics. He also became a professor in the department of solid-state physics at the Moscow Engineering Physics Institute.

The molecular oscillator, studied by Basov, is otherwise called a MASER, an uppercase acronym for Microwave Amplification by Stimulated Emission of Radiation.  The principle behind this device was first explained in 1917 by Albert Einstein, who studied the interaction of electro-magnetic radiation and molecular groups in a restrained space. The result of this study was a three-term equation, which described the consumption and emission of radiation by molecules.

The first two terms in Einstein’s equation had to do with radiation emission and spontaneous radiation processes, already known at the time. However, the third term, discovered by him, had to do with a type of radiation yet unknown.  Whereas the two previous types had an element of spontaneity, the third had to be triggered by certain circumstances, so it was called induced radiation.

Despite it being an interesting phenomenon, its usefulness wasn’t obvious, as the induced radiation involved a relatively small amount of atoms.  Basov came up with a way to use induced radiation, increase its power, and to create a molecular oscillator.  The device he created not only worked as an amplifier, but a generator, with controlled radiation frequency. 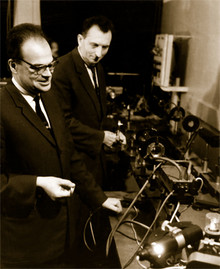 Aleksandr Prokhorov and Nikolay Basov in a laboratory of the Lebedev Physical Institute of the Russian Academy of Sciences, Moscow, 1964

In May 1952, Basov, along with his former professor and now partner Prokhorov, introduced the idea of a molecular generator, based on an inverse population at the Soviet Conference of Radio Spectroscopy. Basically, it meant creating a system where a group of molecules could exist in an excited state rather than in lower energy state. However, they didn’t publish their idea until October of 1954.  Basov and Prokhorov wrote an article about a “three-level method.”

In it, they explained that if atoms are transferred from their basic state to the highest of the three energy states, there would be more molecules on the middle level, then on the lowest. This would allow for an induced radiation with a frequency equal to the difference of energies of the two lower levels. As a result, they were able to create new low-noise molecular oscillators and paramagnetic amplifiers.

At about the same time, in 1953, Charles Townes, a physicist from Columbia University in the United States, created a working MASER (the term he and his colleagues came up with).  He completed work on the MASER ten months before Basov and Prokhorov published their first work on the molecular oscillator.

In 1964, the three scientists were awarded the Nobel Prize “for fundamental work in quantum electronics, which led to the creation of generators and amplifiers, based on the laser and maser principle.” Prokhorov later remembered that he and Basov cast lots on who would have to deliver the speech. The luck fell with Basov, which he didn’t expect at all – he didn’t sleep all night preparing for his Nobel Prize speech.

The sum of the Prize came to some $52 thousand. Half of it was given to Townes and Basov got $13 thousand. By that time the government had already given him an apartment and a car, so he received special permission to open an account at Vneshtorgbank. At the time individuals were not allowed to have accounts in that bank. There are some rumors though, that Basov did not receive any of his prize money, and it all went to the government. 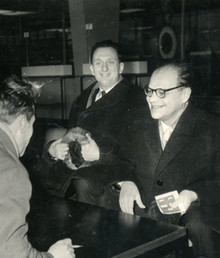 By the time Basov and Prokhorov received the Nobel Prize, they had already been granted the highest award in the Soviet Union – the Lenin Award. The research conducted by Basov, Prokhorov, and Townes gave jumpstarted the further vigorous development of a new movement in physics – quantum electronics.

Basov had an amazing intuition, predicting a scientific revolution after the advent of the laser. It was very brave of him, as many of his colleagues thought it was too exaggerated, and the majority were very skeptical about it.

Basov wrote several hundred articles about masers and lasers.  He and his colleagues constructed a large number of lasers based on crystals, gasses, different combinations of chemical elements, semiconductors, as well as multi-channel and powerful short-pulse lasers. He also tried to focus on practical applications for the laser, in particular its use for thermonuclear fusion, which would allow controlled generation of nuclear power.

In 1958, Basov became deputy director of the Lebedev Institute, and in 1973 – its director. He also chaired the laboratory of radio physics since its opening in 1963 and was a professor at the Moscow Engineering Physics Institute.

Basov is remembered as an unusually friendly and sociable person. Those who knew him say he had an aura of confidence about him that came from someone living in harmony with the world. His colleagues said he had a special, almost paradoxical logic and a high interest toward everything that could have a practical effect, as he never wanted to be simply an observer.  Even while moving up the social ladder, he retained his simple and democratic manner with his colleagues and subordinates. 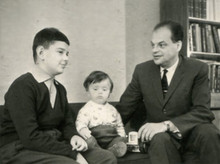 Nikolay Basov with his sons, Gennady and Dmitry. 1964

In 1950, Basov married his fellow student Ksenia Nazarova. She also held a Ph.D. in Physics from the same institute as her husband.  Together they had two sons - Gennady and Dmitry.  Both of them followed in their parents’ footsteps, graduating from the physics faculty of their parents’ Institute.  However, the youngest son Dmitry moved to the United States, where he still lives to this day.

One of Basov’s colleagues recalls, “It was quite prestigious to be the wife of a scientist in the Soviet times, so, when Basov became popular, he all of a sudden became immensely popular with the opposite sex.  Ksenia in turn became the object of jealousy of all the female staff of the institute.  Once they were at a press conference and a young pretty journalist asked him a question.

“How did you meet your wife?”

“We were students at the same institute,” he answered.

“And how many girls did you have in your group?”

“So, looks like you didn’t have much to choose from?”, the journalist tried to be sarcastic.

Then Basov’s wife joined the conversation and said:

Throughout his life Basov suffered many health problems. When he was fighting in WWII, he was appointed to the chemical division, and was badly poisoned there. He was in intensive care for a few days unconscious, and then lost his memory.  It severely damaged his health for the rest of his life.  In 1996, he suffered a heart attack, which left him with recurring brain spasms.

The months before his death Basov spent at the hospital. Doctors could not establish an accurate diagnosis, but were suspecting blood cancer.  Even after his death in 2001, the exact cause could not be established. Basov was buried at the Novodevichy cemetery in the heart of Moscow.