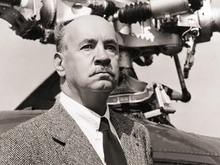 He may not have explored the wild corners of Africa or plunged the depths of the ocean, but in its own way the life of Igor Sikorsky was full of adventures.

His devotion to aviation and the pursuit for design perfection were given momentum by a work of fiction. When he was 11, Igor had a dream inspired by Jules Verne’s novel Robur the Conqueror of flying a giant heavier-than-air vessel kept in the air by numerous propellers.

He was very disappointed when his parents told him airships like this didn’t exist and were unlikely to come into life. This didn’t stop the boy from trying to build a rotorcraft machine of his own design with a rotor powered by a rubber band.

His father Ivan was a doctor of medicine and professor of psychiatry. He wanted Igor to follow in his professional footsteps, but his elder brother, who was a student at the Imperial Naval School in St. Petersburg, convinced Igor to take his path and become a cadet.

However, despite good standing, three years later he had left the elite school in favor of a technical one in Paris. Igor Sikorsky finally finished his education at the Mechanical College of the Kiev Polytechnic Institute in his home city.

The first attepmt to create a helicopter

While in college, the young man headed a student club of aviation engineers. With financial help from his sister he completed his first serious helicopter design. Ironically, the man praised for popularizing the now-classical configuration with a single rotor to create lift and the small one on the tail to compensate for torque was experimenting with twin-rotor designs back then. The model barely had enough power to lift its own weight, and Sikorsky turned to more promising airplanes. 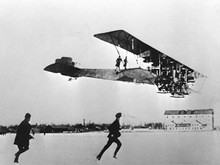 While piloting one of his aircraft (he kept the habit of personally testing his designs even after he could afford hiring pilots to do so for him) Sikorsky got a revelation into how dangerous flying is when a mosquito got into the engine carburator and almost made it stall. He decided that planes had to be bigger and have several engines. The idea defied contemporary aviators’ common sense, since they wanted their designs to be lighter, not heavier.

Nevertheless the first plane in the world to have four engines built by the talented student was a success. Initially called in the French-style the “Le Grand”, it was later renamed Russky Vityaz or Russian Champion. The plane was built in St. Petersburg, and Sikorsky entertained passengers from the high courts of Russian society by shutting down two engines on one wing and continuing with just two running.

The Vityaz was reportedly destroyed by an engine from another aircraft falling on it at the airfield, but the design lived on and was developed into Ilya Muromets, a huge bomber used by Russia during World War II. The heavily armed vehicle was the first strategic bomber ever used, with more than 70 aircraft build.

Immigration to the USA

The Bolshevik revolution and the subsequent Civil War made Sikorsky flee Russia. Legend has it that an admirer of his talent tipped him off that his name was on the terror list due to his links with the Russian Czar Nicholas II .

The monarch favored the engineer and presented him a golden watch back in 1913. Sikorsky’s strong religious beliefs (his father’s father was an Orthodox priest and Igor himself was a devoted Christian) didn’t go well with the aggressive atheism proclaimed by the Soviet authorities either. 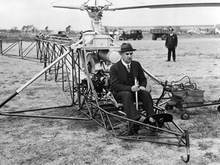 In March 1919, Sikorsky arrived in the United States, leaving behind his daughter and wife, who refused to flee from the country. He spent his first years in America living in poverty, barely making enough for a living by giving lessons in astronomy and math

He also tried to start an aviation business together with several Russian emigrant engineers. Famous Russian composer, pianist and conductor Sergey Rakhmaninov played a crucial role in Sikorsky’s life when he invested the huge sum of $5,000 into the Sikorsky Aircraft Corporation and agreed to become its vice-president for publicity.

With the money the company entered the aviation market and found its place there. Sikorsky’s first big success was the S-38 twin-engine amphibious plane. It helped win orders from Pan American airlines. The later, more popular model the S-42 flying boat was dubbed Flying Clipper for its record characteristics, and its successor S-43 was featured in a famous Soviet film Volga, Volga, where it was implied to be a soviet design.

At the same time Sikorsky spent his spare time on this childhood dream. His first experimental helicopter VS-300 made its first untethered flight in May 1940, and it was shortly followed by the R-4, the first mass-produced helicopter model in the world and the only helicopter used by the Allies in World War II. 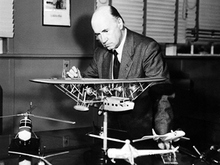 The Sikorsky S-55 was the first helicopter to cross the Atlantics and the Pacific Ocean with an in-flight refueling. The firm is also famous for being the supplier of Marine One helicopters – vehicles used by US presidents.

Apart from his achievements in aviation, Igor Sikorsky was well-known for helping Russian emigrants in the US. He also authored several philosophical and theological works and supported the Russian Orthodox Church Abroad.

From his second marriage Sikorsky fathered four sons. His daughter from the first marriage joined him in America when his sister emigrated with her.

He was fond of travelling and mountaineering, with volcanoes being his favorite destination.

A prize of the American Helicopter Society for constructing a human-powered helicopter is named after Igor Sikorsky. The $20,000 reward has not been claimed so far.