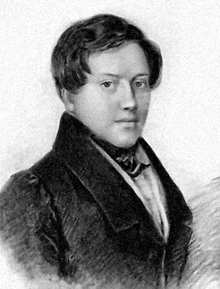 Yevgeny Baratynsky holds an important place among the poets who contributed to the Golden Age of Russian poetry, which reached its height in the 1820s. His style embodies elements of both Classicism and Romanticism and his poetry treats such themes as the role of the poet, disillusionment, the relationship between man and nature and the rise of industrialization. In the minds of his contemporaries, Baratynsky was a poet-philosopher, who expressed in his art the spiritual drama of the generation that felt the inexorable heavy tread of the “Iron Age.” He is also best known for his sensitive elegies dealing with loss and despair and for the personal, revelatory tone of his love poems. Baratynsky was rediscovered by Anna Akhmatova and Joseph Brodsky as a supreme poet of thought.

Baratynsky was born in his family's home on the estate of Mara, in Tambov Province. The estate was granted to his father, Lieutenant-General Abram Andreevich, by Emperor Pavel I. In 1808, when Baratynsky was eight years old, his family moved to Moscow, but upon his father's death two years later, Baratynsky's mother moved back to Mara with her children. The future poet owed his upbringing and education to his mother, Aleksandra Fedorovna Baratynskaya (Cherepanova), a graduate of the Smolny Institute. Baratynsky attended a German boarding school in St. Petersburg for a short period and then enrolled in the Pages' Corps in 1812. After an incident that involved stealing a gold snuffbox full of money with some schoolmates, he was expelled from the Corps, forbidden by the Emperor to ever serve in the military as anything but a private and sent back to Mara. The humiliation of this harsh punishment was to stick with the young man for the rest of his life. Returning to St. Petersburg in 1818, Baratynsky joined the army as a private.

He began writing poetry during this period and became a regular visitor to literary salons and philosophical circles frequented by other St. Petersburg writers. Baratynsky became involved with a group of writers called the Arzamas, which included Aleksandr Turgenev. The group, heavily influenced by French Classicism, played a major role in the development and encouragement of the young poet's versification.

In 1820 Baratynsky served in the Infantry Regiment quartered in Finland. His elegy “Finland,” his poem “Eda” and a number of other poetic works gave Baratynsky the nickname the “singer of Finland.” In his elegies he depicted the austerely beautiful Finnish landscape and portrayed himself as the isolated poet in exile. Man's relationship to nature and the role of the poet in society continued to be prominent themes in Baratynsky's later poetry as well. His first published collection of poems included many pieces dealing with Baratynsky's disillusionment over man's neglect of and alienation from natural beauty as a result of the coming of industrialization. Critics of Baratynsky's poetry, including his friend Pushkin, praised his originality, lyricism, and the keen psychological insight evident in his poetic monologues. He also experimented with language, using neologisms as well as elements of Old Church Slavonic to create a fresher kind of diction. A master of meter, Baratynsky also skillfully manipulated the iambic tetrameter rhythm in his poetry. Almost all of Baratynsky's poetry attests to the conflict he felt between reason and emotion. In 1820 the young poet made his acquaintance with Anton Delvig (a Russian poet and journalist), who rallied his falling spirits and introduced him to the literary press. In his absence in Finland he was accepted to the “Free Society of Champions of Russian Letters.” Only six years later, in spring 1825, due to the insistent efforts of Zhukovsky and Turgenev, Baratynsky was promoted to the rank of officer.

In January 1826 he retired, settled in Muranovo not far from Moscow and married the senior daughter of the Major-General Engelgart. She became his assistant in literary affairs and curator of his manuscripts. That same year in St. Petersburg came the publication of “Eda,” “Finish Story” and “Feasts.” Baratynsky's first collection of poetry, “Stikhotvoreniia” (“Poems”) was published in 1827 to favorable reviews. It included elegies and that made him truly famous. “Baratynsky is a charm and a miracle. After him I will never more publish my elegies,” wrote Pushkin to Bestuzhev-Marlinsky. The expression of friendship between Baratynsky and Pushkin and the similarity of their literary views was the joint 1828 publication of the book “Two Stories in Verse” that included Pushkin's poem “Count Nulin” and Baratynsky’s poem “The Ball.” Baratynsky continued to write and publish poetry and contributed to several magazines, including the Moskovsky Telegraf, Literaturnaya Gazeta, and The European. He became associated with the Lovers of Wisdom Circle, a group of intellectuals interested in the idealistic philosophy of Friedrich von Schiller. Yet when his second collection of poetry, also entitled "Stikhotvoreniia," came out in 1835, Baratynsky received harsh criticism from reviewers. In his second collection of poetry, he relied heavily on Schiller's philosophical ideas concerning the imagination as a bridge between reason and emotion. This persistent dualism remained a prominent feature of his style and, as he grew increasingly discouraged by his critics, especially following the publication of “The Gypsy Girl” (1831), his poetry grew more disillusioned. Yet, several scholars have pointed out that Baratynsky's reworking of the elegy form in his second collection revitalized the genre as a whole in Russian poetry of the time. His last collection, “Sumerki,” reveals a more conservative and pessimistic Baratynsky, preoccupied with loss and finality. General interest in poetry had declined in the late 1830s and Russian writers turned instead to realism. 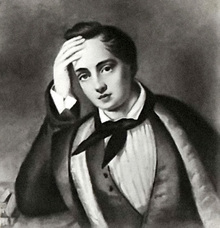 In autumn 1843 the poet, with his wife and elder children, undertook a foreign journey. In Paris he received a warm welcome from his compatriots as well as from French writers. There he translated several of his poems into French. In April 1844 the Baratynskys arrived in Italy where the poet created his last poems, “Pyroscaph” and “To the Usher-Italian.”

On 29 July 1844 Baratynsky died suddenly in Naples while on a vacation. His body was brought to Petersburg and buried in the Tikhvinskoe Cemetery of Aleksandr Nevsky Lavra.

Poison, we drink in love – the sweetest one,
But that’s the poison, what we drink,
And always pay for joy, that’s briefest one,
With sadness of the long days’ link.
“The flames of love are flames of happiness.”
Everyone says; but what’s a fact?
It empties, in its fierce craziness,
The very soul, it attracts!
Who will be able to stifle the memories,
Of days of suffering and happiness,
Of your enchanting days, oh love?
Then I’d return to life, to joy and fun,
And put my soul before your bright one
For golden dreams my youth above.

Although Baratynsky received praise from critics for his first two collections of poetry, by the time his third and last collection was published, he was already a marginal name in Russian literature. Forgotten almost entirely by the end of his life, Baratynsky and his works were rediscovered at the end of the nineteenth century by the Russian Symbolist poets and a complete edition of his works was published for the first time in the early twentieth century. Modern criticism of his poetry has focused on Baratynsky's style as well as his ideas.