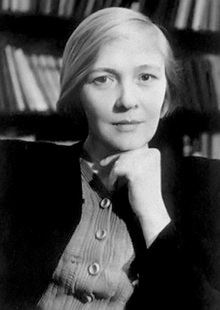 Olga Berggolts was a Soviet poet and blockade-era radio speaker; the voice broadcasting on the one working radio station during the blockade of Leningrad, a solitary familiar voice that many survivors have said literally kept them alive during those dark and lean days. From her microphone straight into the barricaded apartments of the besieged city, Olga read her own poems and those of other poets, delivered news about bombings or fires in the city and, above all, encouraged the besieged Leningraders to hold on to their last hope of life.

She survived the terrible ordeal of the German blockade of Leningrad and in 1942 published her “Leningrad Notebook,” which gave tragic expression to the episode with her restrained, ordered treatment lending an almost unbearable poignancy to much of the verse. Olga Berggolts, like the poet Anna Akhmatova who greatly influenced her, is intricately associated with the northern Russian capital. A key figure in the post-Stalin “thaw” in literature, she is chiefly known for her wartime poetry, but her intimate poetry, particularly her intense, somber love poems, also affirm a heroically a human right to suffering, denied so often by the strident prophets of dogmatic optimism. 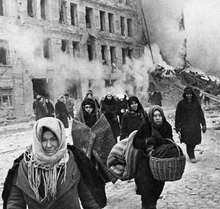 Translated by Yevgeny Bonver
But I tell you that there are not
The years, that I for empty hold,
The ways, without a goal set,
The messages that nothing had.
There’re not the worlds, I ever lost,
The gifts, I gave without good thoughts,
There’s not a love that’s a mistake,
That is deceived, that’s a heart’s ache –
Its everlasting clear light
All over glows in my heart.
And it is never late once more
To start all life in the new world –
Such, that in toilsome days of yore,
To cross not any moan or word. 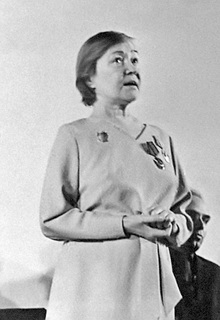 Before the war, Olga had problems with the Communist Party. Originally an idealistic activist, she was ousted from the Party in the 1930s and even jailed by the NKVD (forerunner to the KGB) for a year for "unreliability to the Party." She was bereft without the Party, alone and shunned.

Olga was pregnant with her third child when the NKVD swooped down in 1937 and arrested her. She was questioned and tortured and eventually gave birth to a stillborn child. It would have been her third after Irina, from her first short marriage to the poet Boris Kornilov, and Maya, from her second marriage to literary scholar Mikhail Molchanov (in 1942 he died of hunger). Both daughters died before the war, Irina at 8 and Maya at just 11 months. Other blows that Olga endured included Kornilov's exile to Siberia for the supposedly dissident leanings in his writing. Olga managed to restore his reputation and even publish a volume of his works in 1956. During that same year, she was the first public figure to stand up in support of the writers Mikhail Zoshchenko and Anna Akhmatova who were singled out for harassment by Andrey Zhdanov, head of the City Soviet of Leningrad. As part of his post-war campaign to restore Party control over culture, Zhdanov shut down the local literary journals Leningrad and Zvezda, two organs in which Zoshchenko and Akhmatova were regularly published.

Olga was released from prison in 1939 and reinstated as a Communist Party member. By that time, however, the country was less than two years from war. 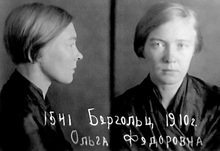 Despite the meat grinder of the NKVD, she still believed strongly in the ideals and values of communism. She did not change her ideals even after a year in prison. Olga concluded that "there was something wrong with the people, not with the idea of communism.”

In 1942, the NKVD exiled her father, a medical doctor, to Siberia for refusing to spy on his colleges and patients.

Olga’s sister Maria Berggolts recalls, "During the war we had two enemies: German fascists outside and Russian fascists within the country. The NKVD, which originally had the executive power of the government, slipped out from under the government's control and acted alone."

Other members of their family - three aunts and a grandmother - starved to death during the 900-day blockade of Leningrad. The war also took Olga's husband Nikolay, who had been the center of the poet's life. Toward the end of the siege, Maria convinced Olga to flee Leningrad for Moscow. 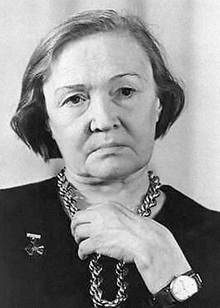 Maria said of her older sister: "She was always admonishing us. She forbade us from getting lice, telling us to wash our hair even when there was no warm water and it was 40 degrees below zero outside. I think Olga meant for us not only to fight against lice, but for the whole idea of surviving.”

According to Maria, Olga seemed to be saying: “As long as you were strong enough to wash your hair, even if you were starving, you would survive.”

Olga was fond of saying, “there are only two sorts of people: those who trust and don't trust, those who drink and don't drink.” And Olga trusted and drank. She died in 1975.

Her sister recalled, "Once, after Olga's death, a friend and I went to the cemetery to Olga's grave. It was very cold, and we had a drink in Olga's memory to warm ourselves up. Then I noticed a worker nearing us. As he approached, my friend and I offered him some wine. He finished his glass and then noticed Olga's name on the grave.”

"Berggolts!" he exclaimed, according to Maria. "Leningrad's Madonna! It was she who helped me to survive the blockade, just hearing her voice on radio."

Olga composed hundreds of poems, many of which she read over the airwaves during the siege. However, there is one solemn place where hundreds of thousands read Olga Berggolts' words every year: the Memorial Wall at Piskaryevskoye Cemetery. Berggolts is the author of the immoral words carved there in stone, "Nikto ne zabyt - Nichto ne zabyto" ("Nobody is forgotten - Nothing is forgotten"). 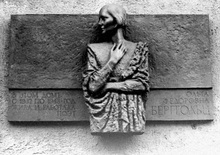 (1947)
Don’t even try your looking back
At this gloom dark, at this gloom ice;
There someone waits on your feet’s track,
You can’t stop answering his eyes.
Today I looked back and… at once
I see: he looks at me, my friend,
With his alive eyes from the ice –
My single one until my end.
And I’d not known that ‘tis thus.
I’d thought another is my light.
But, oh, my plight, dream, paradise,
I live only when I’m your sight!
Only your look makes right my life,
I’m faithful only to your glance:
For all who lives – I am his wife,
Your widow – for both of us.

(1952)
My foes will be not by my perish consoled –
They won’t have a reason to pour the false tears.
The hook, I’m to hang on, still isn’t in a board,
It’s not even forged, its ore lies in the earth.
I’ll stand up above my life’s bottomless crater,
Above all its fears and iron-made pines…
I know and remember so much… I’m a fighter.
I’m too of some kind of the horrible price...