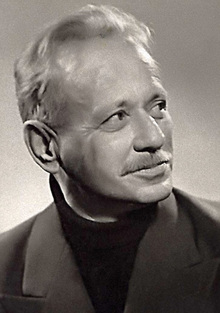 “I would like my books to help people become better, obtain clearer souls, discover a love for another person… If I managed to do so, I am very happy.” These words belong to the outstanding 20th century Russian novelist Mikhail Aleksandrovich Sholokhov.

Mikhail Sholokhov was born on 11 May 1905 in the Kruzhlinin hamlet of Stanitsa, a Cossack village in Veshenskaya in the Rostov-on-Don Region in Russia (a former administrative region of the Don Cossack Army). Sholokhov is considered one of the greatest writers of the Soviet Union. His life was full of secrets and is still today the subject of much research and investigation.

His early biography is vague at best; even his date of birth cannot be confirmed and some believe he was actually born two years earlier than the official date.

It is known that Mikhail was born into a family of farmers. His father, Aleksandr Sholokhov (1865-1925), was a merchant of Stanitsa; his mother, Anastasia Chernikova (1871-1942), was a Cossack woman. According to some resources, she was illiterate and learned to write at the age of 40 to keep in touch with her son. Mikhail’s parents strived to give their child a good education; they had both the desire and money. Young Sholokhov studied in different schools in various towns and cities, but finished only four years of gymnasium (in 1918). At the age of 17 he worked as a loader, builder, accountant and even, as a teacher of literacy.

Mikhail was determined to become a journalist. In 1922 he went to Moscow, started writing short articles, and became a member of a literature group called the “Young Guard.” It was a difficult time for the country, which was torn apart by the Russian Civil War – a multi-party conflict, with the principal fighting going on between the Bolshevik Red Army (revolutionaries, led by Lenin) and the White Army (Russian forces, opposed to he Bolsheviks and the October Revolution). Young Mikhail took the side of the revolutionaries. According to some sources, he worked as a ration commissar, taking part in confiscation of food supplies from “kulaks” (relatively wealthy farmers, who didn’t support the Bolsheviks). The truthfulness of this biographical fact is still questioned.

In 1924 Mikhail Sholokhov’s first short stories were published in different newspapers. A few years later these works were gathered in the collections “Tales of the Don” and “Lazurevaya Step” (1926). In 1925 he returned to Don where his real masterpieces were created. 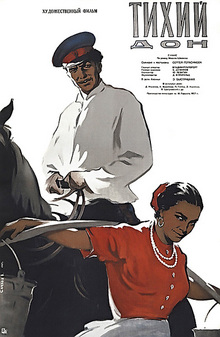 Sholokhov’s first novel “Quietly Flows The Don” (“Tikhiy Don”) became one of his most famous works. The four volumes of the novel were created over a span of 14 years, beginning in 1926. The book covers the periods of World War I, the Russian Civil War and the establishment of Soviet rule in the Don Region. In 1965 “Quietly Flows The Don” earned Sholokhov the Nobel Prize in Literature. The novel, despite the clearly communist position of its author, describes the life of the White Cossacks (those Cossacks who were thought to be supporters of the White Army), with a focus on the main character - Grigory Melekhov. The plot and composition show an obvious and painful antagonism between different generations, “red” and “white” supporters, family values and social duties, life and death. Grigory Melekhov strives to stop a pointless existence of chain reactions in a cruel life; he becomes emotionally ruined by the horrors of war and chaos. Readers of those times advised the writer to “end the novel adequately” by having Grigory join the Red Army. But the end greatly differed from what public expectations: Melekhov returns to his family and native land.

“Quietly Flows The Don,” published in 1928 (first and second volumes) and 1940 (third and forth volumes), aroused a furor of comments. Some criticized the ending, which was not suitable to communist ideology; others blamed the author for plagiarism and didn’t believe the 23-year old could have created such a wonderful piece of literature. But these accusations failed due to the absence of documented evidence. In the 1930s Sholokhov was almost arrested, but luckily escaped prison. Only the support of Stalin (who Sholokhov personally met in 1931) gave the green light for the author to continue writing, an unprecedented occurrence for the time when many artists were arrested and even executed because of their “unacceptable” beliefs.

Another of Mikhail Sholokhov’s famous novels “Virgin Soil Upturned” (“Podnyataya Tselina”), which consists of two parts, took more than 28 years to complete (1932-1960). The second part of the book was lost during the Second World War, and was rewritten later. “Virgin Soil Upturned” tells of another historically important and controversial phenomenon of the Soviet Union – collectivization, a policy, pursued between 1928-1940, aimed at the consolidation of individual land and labor into collective farms. Sholokhov clearly supported Stalin’s program in the novel, but he also described the unattractive side effects of the policy. Consequently, after publishing the first part f the novel in 1932, the author was almost arrested. Stalin’s intercession saved Sholokhov one more time.

During the Great Patriotic War (a term, used in post-soviet countries, to describe their part in the Second World War) Mikhail Sholokhov served in the army, and was a military journalist. This experience inspired him to create a series of works. Some of the most prominent were “The Fate of a Man” (“Sudba Cheloveka”, 1956—1957), “They Fought for Their Country” (“Oni Srazhalis Za Rodinu”, 1942-1969, unfinished) and “The Science of Hatred” (“Nauka Nenavisti”, 1942). In the late 1960s he practically stopped writing.

Mikhail Sholokhov was married to Maria Gromoslavskaya. They had four children. The great writer died in 1984, from throat cancer, in his native Veshenskaya.