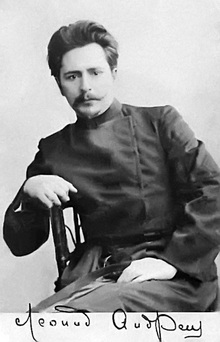 Leonid Andreev was a Russian playwright and short story writer. Considered the first and leading expressionist in Russian literature, Andreev was also one of the most prominent representatives of the so-called Silver Age.

Leonid Nikolaevich Andreev was born in Oryol. His father was the son of the head of the local nobility and his mother a serf girl from the family of a bankrupt Polish landowner. His father worked as a land-surveyor. The family struggled with poverty but shortly before Leonid was born his father had attained a position in a bank and had bought a house. Leonid’s father was famous for his exceptional physical force as well as his strong sense of justice and straightforward character that never failed him even in his most notorious drunken fights and pranks. Later Leonid explained that his own difficult character and inclination to drinking was hereditary. His mother was a simple woman with no education and her greatest merit was her endless and unconditional love for her children. She often told them stories. She was a talented storyteller and it was difficult to discern between what was real and what was made up.

Leonid Andreev remembers his childhood as happy and carefree. At the age of six he learned to read and gobbled up every book he came across. In

1882-1891 he attended the Oryol Gymnasium but was a poor student both in grades and attendance. He discovered his writing talent through cheating: he copied his classmates’ homework in math and paid them back by doing essays for them in different styles. He quite enjoyed writing “in Chekhov’s manner” or “in Tolstoy’s manner,” copying the characteristics of the great authors’ texts. In school, though, he never thought of literature as a

career, wanting instead to become an artist. Oryol had no painting school and a fruitless search for a tutor left Andreev with only a few amateur attempts at drawing. Later, after he had already become a famous writer, he often said how unhappy he was that his artistic talent was never developed, even though it made him take up writing in alternative.

He read incessantly. One of his favorite authors was Arthur Schopenhauer and one of his greatest literary influences was “The World as Will and Representation.” Obsessed by the philosophical questions of life and death, at the age of 16 he even tried to test “fate” by laying on the railroad tracks. This time “fate” was benevolent – the train had a high-set heater and ran above Leonid without as much as touching him.

For Leonid high school was a time of endless love affairs. He fell in love often and with a fierce force. “As some need words, as others need labor or fight, I need love,” he wrote in his diary.

Upon graduation he entered the law department at the St. Petersburg University. By this time his family’s financial situation had drastically worsened. His father died and the family suffered periods of extreme poverty and hunger. This is reflected in his first short story “In Hunger and Gold” about a starving student. In 1893 Andreev was expelled from the university for his inability to pay his tuition fees. He moved to the law faculty of the Moscow University, where he had support from friends. According to the university rules, he was not to enter any societies, secret or not. 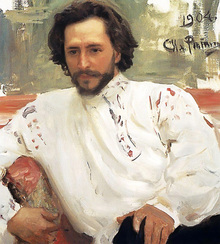 In the summer of 1894 Leonid spent his holidays in his hometown and lived through the longest and hardest love drama of his life. “22 July 1894 is my second birthday,” he wrote in his diary. But the girl he fell in love with rejected him – and he attempted suicide. He tried to shoot himself, but the only result of this attempt was heart disease and a confession in church.

The following year his family, including five younger siblings, moved to Moscow where they continued to live in poverty in cheap rented apartments – most of the buildings where they resided can still be found in the city today. While still a student Andreev gave private lessons, worked for “The Russian Word” newspaper producing notes on the opening hours of museums and the like and showed no interest in politics. He was a member of the Oryol Friends Association (then targeted by police as a possible secret society), which laughed at the new “reformists” and their Marxist ideals. The meetings of people from the Oryol area are described in Andreev’s stories “Gaudeamus” and “The Days Of Our Lives.”

Andreev spent every spare minute reading, devouring hundreds of philosophy books, spending entire nights pouring over the works of Nietzsche and taking his death in 1900 as a personal loss. Andreev had difficulty getting his writings published so he took to painting portraits made to order at 3-5 roubles a piece. After he mastered his technique, he could even get 10 or 12 roubles per painting.

In 1897 – to his surprise – he passed his graduation exams at the university with high grades, earning a second-degree diploma allowing him to start a lawyer’s practice. Soon he was an assistant to a prominent lawyer and worked in the courts until 1902, taking his job very seriously. 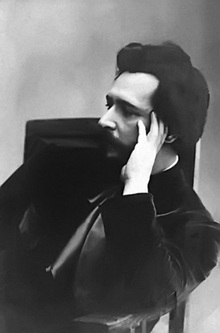 One day a man he knew from the law practice offered him a job as a court reporter for the “Moscow Herald” magazine. A few days later Leonid Andreev brought his first article to the editor and amazed the man with the high quality of his writing. He now worked two jobs defending people in court and then writing anonymously about it. He was recognized as a talented reporter and in a few months received an offer to write for the new Moscow newspaper “Courier.” Soon he was also publishing satirical articles and short stories signing them as “James Lynch” or “L.-ev.” Later, when he became a famous author, some magazines and newspapers reprinted his old stories just to have the fashionable writer’s work on their pages.

In 1898 Andreev was asked to write a special feature for the Easter edition of a magazine – which he did, producing his masterpiece “Bergamot and Garaska.” It was a life-changing moment as the story was noticed by Maxim Gorky. The two writers became friends and soon Andreev joined the circle of Bunin, Teleshov and Chaliapin. Gorky helped Andreev get his works published by “Znanie” – a publishing house founded by the union of young writers to promote modern literature.

In 1901 Leonid Andreev received public acclaim and critical admiration for his short story “Once Upon a Time.” Later in the year his first collection of short stories was published. It was paid for by Maxim Gorky and included “Lie,” “Silence,” “Little Angel” and others.

In February 1902 in the church of St. Nicholas on Arbat Street in Moscow he married Anna Veligorskaya. Together they started a tradition of “literary Mondays,” inviting the best authors of the time to recite the most outstanding works of the early 20th century. Andreev was once taken to court for his public reading the rebellious poem “Oh No, I’m Not With You” by Stepan Skitalets.

In 1902 Leonid Andreev became a literary editor for “Courier.” In this role, he was bold enough to publish the works of Serafimovich, Remizov, Zaitsev and Chulkov. His own works enjoyed immense popularity and his books sold by the tens of thousands. Critics took the young writer seriously, praising his talent and his very pronounced literary style. 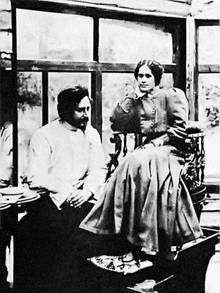 In 1905, on the anniversary of his wedding, Leonid Andreev was taken to Taganskaya Prison (single cell number 129) for fostering a secret meeting of the leaders of the Russian Social-Democratic Workers’ Party. He was released on bail within two weeks, but from then on was kept under close attention by the police. That same year Andreev wrote his story “The Governor” reflecting the assassination of the Moscow Governor-General. Still later in the year he moved to St. Petersburg and then to Germany, where his wife gave birth to their son Daniil. She died soon afterwards.

By 1905 Andreev had produced many of his most famous stories: “Laughter,” “The Wall,” “The Abyss,” “The Idea” and “In the Fog.” His novel “Red Laughter,” written during the Russo-Japanese war of 1904-1905, reflected his deep revolt against the cruelty of war. After 1905 he became better know as a playwright, with his first stage play “To The Stars” published that year. From then until 1917 he published at least one play a year.

In 1908 he moved to his own house in the Finnish village of Vammelsu and visited Moscow only when his plays were staged. “The Life Of Man” was staged by the two giants of Russian theater - Stanislavsky in Moscow and Meyerhold in St. Petersburg. In 1909 he saw “The Days Of Our Lives” and the tragedy “Anathema” staged. “He Who Gets Slapped” followed, also to great success.

In 1913 Leonid Andreev contributed some of his paintings to an exhibit of independent artists in St. Petersburg and was praised for his talent in this area by Ilya Repin and Nicholas Roerich.

The idea of the Bolshevik Revolution did not appeal to the writer. After the power takeover, Finland received independence and Andreev found himself an immigrant. The events that followed the revolution revolted him and inspired to begin writing “The Diary of Satan” about the revolutionaries, but the work was never completed. In 1919 Andreev died from a heart attack. His remnants were reburied in Leningrad (the name of St. Petersburg during Soviet times) on Poet’s Alley in 1957.