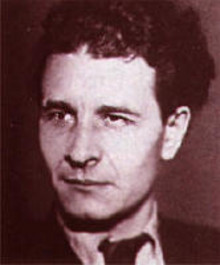 “And so I felt that I - not generations of people, but I myself - I had conquered the old God and the old life, I myself had created all this, and I'm like a tower, I'm afraid to move my elbow for fear of shattering the walls, the cupolas, the machines...” – from the novel We by Evgeny Zamyatin

Evgeny Zamyatin, author of We - one of the most important dystopian novels of the 20th centuries - was born on 20 January 1884 in the town of Lebedyan, in the modern Lipetsk region. His family, although of modest financial means, provided the young Zamyatin with an environment of cultural and spiritual wealth. His father, a nobleman by heritage, was a Russian Orthodox priest; his mother - a pianist.

“I grew up under the grand piano – mother was a good musician. I read Gogol when I was four. I had a childhood mostly without friends; books were my friends,” the writer would later recall in his autobiography.

At the age of eleven Zamyatin entered the Lebedyan secondary school, which he finished six years later with a gold medal – the top scholastic award. But despite a solid background in the humanities, he chose to study naval engineering at the St. Petersburg Polytechnical University.

As a student Zamyatin joined the Bolshevik movement, which at the time was gaining momentum throughout Russia. In 1905, during one of the trips he made as part of his studies, he witnessed the famous Battleship Potemkin uprising - one of the key moments leading up to the Russian Revolution of 1917. The event had an important impact on the writer and he would later relay it in his short story Three Days.

With his revolutionary fervor ablaze, Zamyatin returned to St. Petersburg and continued his involvement in Bolshevik activities. Within a year though he was arrested, imprisoned and exiled back to his hometown only to return to St. Petersburg secretly and be exiled again upon his graduation from university.

During this period Zamyatin began working on his literary prowess. In 1908 he published his first short story Alone. True recognition, however, came in 1912 following the publication of his short novel A Provincial Tale, which received great acclaim from fellow writers and critics alike.

Without abandoning his engineering profession, Zamyatin spent the ensuing years writing and teaching courses on literary technique. With time his work began to incline more towards political satire and in 1914 he was even tried for insulting the Russian military in his short novel A Godforsaken Hole. Although he was subsequently acquitted, the work was ordered destroyed.

Undaunted by censorship, Zamyatin continued writing and by the time of the Revolution in 1917 he had gained a reputation as a true master of belles lettres and was a prominent figure of the literary community. He arrived to witness the February Bourgeois Democratic Revolution from London, where he had been assigned to oversee the construction of an icebreaker ship. Although he was initially excited about the Bolsheviks’ coup d’état, he gradually became disillusioned with the established Soviet power and with time came to deeply resent its totalitarian control of individuality and the arts.

Somber sentiments began to transpire ever more palpably in Zamyatin’s writing. In 1921 he published the article “I Am Afraid,” which addressed the suppression of freedom of thought, and the short story “The Cave,” which juxtaposed communism with prehistoric primitivism. On several occasions over the next few years his fearless calls “to defend the human being and humanity” landed Zamyatin in prison.

His ideological drift away from the new Soviet power structure put Zamyatin among the ranks of intellectual dissidents and earned him a reputation as an “an internal émigré,” as historians would later refer to him. His fashion and style also seemed flamboyant for the time, betraying signs of his trips to Europe and setting him even further apart from his contemporaries.

Also, in 1921, Zamyatin completed We - his most important work and, according to some critics, one of the most important novels of all time. It is set in the totalitarian One State, whose citizens live a standardized life, cut off from the rest of the world. Amid the mechanization and the complete suppression of individuality and human feelings, the protagonist - Engineer D-503 – finds love and struggles to understand it.

We is thought to be the founding work in the string of “dystopian” literature that would later emerge. Among the novels to have been inspired by We are Aldous Huxley’s Brave New World, George Orwell’s 1984 and Ray Bradbury’s Farenheit 451.

Upon its completion, however, the novel unleashed a storm of invective from the authorities and critics. Zamyatin was branded “an opponent of the revolution and representative of reactionary ideas, preaching petit bourgeois ease and a quiet life as the idea of existence.” The work was banned from publication in the Soviet Union and did not appear in print until 1988. Its English translation, however, was published in New York in 1924.

Over the next ten years Zamyatin had to endure unrelenting censorship as the Soviet authorities launched a full-out war against "degenerative art" and ideological heresy.  The writer saw his plays banned from the stage, his writings were no longer published and soon even editorial and translation work became impossible. Towards the end of the 1920s he was forced to resign from the Writers’ Union and in 1930 his name appeared on the list of banned writers and his books were removed from libraries.

No longer able to survive in this internal exile, Zamyatin appealed to Joseph Stalin with a request to leave the USSR. “For me, as a writer, not being able to write is simply a death sentence, but such circumstances have arisen that I cannot continue my work, as no creative work is possible if it has to be done in an environment of systematic persecution that becomes worse with each year,” Zamyatin wrote in his letter.

Shortly thereafter, Zamyatin was given permission to leave. In 1931 he immigrated to Paris where he died only six years later.

Denis Fonvizin Denis Fonvizin, often referred to as the “Russian Molière,” was the first truly original Russian dramatist of the 18th century.