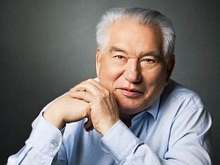 Chinghiz Aitmatov was the most celebrated representative of Kyrgyzstan, a landlocked, mountainous nation of five million people in the heart of Central Asia and a Soviet republic until 1991. Aitmatov is revered for building a bridge between the world of traditional Kyrgyz folklore and modern Eurasian literature.

A bilingual and bicultural writer, Aitmatov wrote his prose and plays in both his native Kyrgyz and in Russian. His works have been translated into more than 150 languages. He brilliantly combined elements of Kyrgyz folktales and epics with formally traditional Russian realism. Aitmatov was deeply in love with his native land and lore, but he was also a Soviet patriot and a true internationalist. He urged the Kyrgyz Soviet authorities to treat the Kyrgyz language with dignity and to elevate its official position along side that of Russian, which was at the time described as "the second mother tongue" of the Kyrgyz people. He endorsed the Kyrgyz language's status in the 1980s, when few schools were teaching in Kyrgyz in Bishkek (formerly Frunze), the capital of Kyrgyzstan.

To understand Chingiz Aitmatov, we must first become familiar with the spectrum of themes placed at his disposal by the Asian culture and to understand his themes, it is necessary to understand the Kyrgyz social milieu from which he emerged, the cultural ties that have honed the Kyrgyz culture over centuries and the evolution of that culture when placed under the strain of new, even alien, Soviet trends.

A major theme in Aitmatov's stories concerns inequality among male and female members of traditional Central Asian society. The sub themes that emerge in story after story include the oppression of women by men, landlords, and mullahs. He writes about the lack of access to education in the region (especially in rural areas and particularly for girls), treatment of women as commodities and polygamy. Aitmatov confronts these issues head on and creates a number of memorable female characters like Jamila in “Jamila,” Jaidar in “Goodbye, Gyulsary!” and Altynai, in “Duishen.” These strong-willed women break with tradition and set forth new trends for their fellow sufferers. The French poet Louis Aragon described “Jamila” as "the world's most beautiful love story" arguing that it was immoral to praise the heroine, who fell in love with someone else while her husband was courageously fighting Nazi Germany during World War II. Aitmatov believed that mankind's socio-political, economic, ideological and even environmental problems would disappear if education could be advanced beyond rote memorization, and if a true communal concern, a true love, could meld humans and nature. Chingiz Aitmatov declared: "In the end, what is right? What should be the standard for distinguishing between right and wrong? I have to believe that it is love for our fellow human beings, a love that wishes all who have been born on this planet happiness and freedom. No ideology or national structure is more important than this. And it is when people love that they become true heroes."

Aitmatov was born into the family of Torekul and Nagima Aitmatov in the village of Sheker (Talas Valley, at the foothills of the Tien Shan Mountains, near the Chinese border in Kyrgyzstan). Village tradition required that he should know seven generations of his ancestors. And he knew every single one. The Aitmatov family was closely knit. Chingiz Aitmatov's paternal grandmother was his closest friend. To teach him about Kyrgyz culture, she took the boy to traditional field festivities, weddings, and funeral repasts. Aitmatov also accompanied her to meetings with storytellers, bards, and akin singers. In order to echo the spirit of a culture, a writer must have an intimate understanding of it. In addition to detailed knowledge, Aitmatov's writing reflects a deep respect for tribal traditions. He wrote on those rare experiences as his writing weaved a masterful tapestry of Kyrgyz traditions. 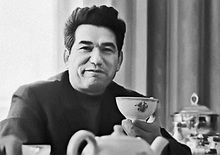 Aitmatov's father, Torekul Aitmatov, was born into a middle class peasant family. He graduated from high school (gymnasium) in 1917 and was elected secretary of the Committee of the Poor in 1920. Between 1924 and 1935 he worked in a number of positions in the Party apparatus. When Aitmatov was just nine years old, his childhood was marred by a deep tragedy that affected the rest of his life: his father Torekul, just 35 years old, one of the first Kyrgyz communists and a regional party secretary, was arrested in 1937 and executed on a charge of "bourgeois nationalism." Chingiz, the eldest boy, coped with the shame and held the family together. Many villagers assumed that since their father was being punished, he must have done something bad. There were times when the young Aitmatov didn't even want to tell people his last name. But there were some, like his elementary school teacher, who did not allow their vision to be clouded by the swirl of events. One day this teacher said to him: "Never look down when you say your father's name. Do you understand?" These words became a lifelong treasure to him. "That teacher gave me courage. He taught me to hold fast to my humanity and to place utmost importance on human dignity. Even now, my blood boils whenever I see someone being demeaned or insulted." 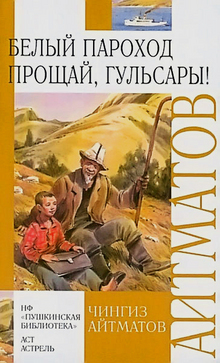 At the age of fourteen, he abandoned his studies to contribute to the war effort. Aitmatov's mother, Nagima Hamzaevna Aitmatova, was a true product of the Soviet system. In 1924, she met Torekul Aitmatov and devoted herself to promoting women's rights, fighting illiteracy, rooting out vestiges of Islam remaining in the republic and working to put forth land and water reforms. From 1938 until she retired in 1954, she worked in the Kirov Region Financial Department. When World War II began, the Aitmatovs' lives grew even more difficult. They lived in a dilapidated shack. Aitmatov's mother was frequently bedridden with sickness, and he had to quit school at 14. But since he excelled in reading and writing, he was chosen as secretary of the village council. The task he hated most was delivering the army's notices of soldiers killed in action. When he appeared at the homes of those who had lost loved ones at the front, they would peer at him with frightened, anxious faces. He would take out of his bag a piece of paper that bore the seal of the Russian army. He had to read out the brief message.

Before embarking on his writing career, after World War II, Aitmatov graduated from the Kyrgyz Agricultural Institute. Nonetheless he found himself increasingly drawn to creative writing, so at the age of 27, he entered the Institute of Literature. In 1952 he started publishing his first Kyrgyz-language short stories in periodicals and four years later he entered the higher literary course at Moscow's Gorky Institute. His first short story translated into Russian appeared in 1958, the year he graduated. That same year, he published “Jamila,” the tale that brought him international acclaim.

In his book "The Day Lasts More Than a Hundred Years" Aitmatov coined the term "mankurt." The book explored the feelings of a Kazakh man who was torn between the traditions of his people and the efforts of the Soviet government to create a "Soviet person." A "mankurt" was a Central Asian who had opted for being a "Soviet person" and the term was adopted and used derisively by Central Asians. His heart cried out in anguish for his father who had been framed by false charges and murdered by lies, and for his mother who had endured all and died, never knowing what had become of her husband, and who had allowed him, her son, to study after the war, telling him not to worry about her or the family. His heart surged with hatred toward craven liars, toward the lust for power and domination that drove them to insanity. And his heart burned with anger toward all those who would inflict such pain and misery on mothers and children of his motherland.

In 1951 Aitmatov married Keres Shamshibaev. Although the marriage produced three sons and a daughter, it did not last long. He then married Maria Urmatova in 1981.

He was awarded the Lenin Prize for Literature in 1963 for his collection of short stories entitled “The Tales of Mountains and Steppes” and the State Prize in 1968 for his first novel, “Farewell Gyulsary!” In 1978, he was distinguished as a Hero of Socialist Labor.

In 1986, Aitmatov founded the famous Issyk-Kul Forum, which brought intellectuals from the Soviet bloc and the West together at a lakeside resort to discuss major global challenges face to face. Aitmatov was an adviser to Mikhail Gorbachev, President of the USSR in the early 1990s. He joined the Communist Party in 1959. He was a full member of the Academy of Sciences of Kyrgyzstan, a member of the European Academy of Arts and Sciences and a member of the World Academy of Science and Arts. He was also the Kyrgyz ambassador to the EU, NATO, UNESCO, Belgium, Luxembourg and the Netherlands. One of his sons, Askar, was foreign minister of Kyrgyzstan from 2002 to 2005.

Throughout his life, Aitmatov preserved his love for his fellow men, and for nature and the animal world. His last novel, "When the Mountains Fall Down: The Eternal Bride," was written in 2005 as a final appeal to his people to preserve the beauty of the Celestial Mountains (Tengir-Too in Kyrgyz, Tian-Shan in Chinese), which the Kyrgyz have traditionally regarded as sacred. The two heroes of the novel, a journalist named Arsen Samanchin and an indigenous snow leopard (Jaa Bars), both become victims of international poaching in a tale of the perils of the greedy and careless exploitation of the environment.

Turkey nominated him as a writer in a Turkic language for the 2008 Nobel Prize for literature.

Several of Aitmatov’s stories were turned into popular movies. Aitmatov was in the central Russian city of Kazan, where a Russian film crew was making a film based upon his novel “The Day Lasts More Than a Hundred Years” and a documentary about his life, when he complained of feeling ill. He had suffered lung and kidney failure. He was quickly rushed to a local hospital and two days later flown out to a clinic in Germany, where he passed away.

The Kyrgyz people say that two heroes made their nation world-known: one is the epic hero of Manas; the other is Chingiz Aitmatov.

"The responsibility of a writer is to bring forth words that capture, through painful personal experience, people's suffering, pain, faith and hope. This is because a writer is charged with the mission of speaking on behalf of his fellow human beings. Everything that happens in the world is happening to me personally.” - Aitmatov