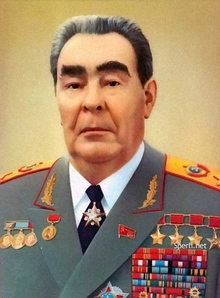 Brezhnev was born on December 19, 1906 in the Ukrainian village of Kamenskoye (now Dniprodzerzhynsk) in the family of a steel worker. He got his first job at a butter-making factory at the age of 15. Like many working class youngsters after the revolution, he received a technical education, first in land management, then in metallurgy. In the 1920s Brezhnev worked as a land surveyor and later became an engineer in the iron and steel industries of Eastern Ukraine.

He joined the Communist Party in 1931 and held a series of local party posts. Shortly after joining, Brezhnev met Nikita Khrushchev and soon became his protégé, rising through the ranks. After Khrushchev came to power, Brezhnev routinely supported the new Soviet leader. He took part in Khrushchev’s “virgin lands” campaign in Kazakhstan – a massive initiative to open up vast tracts of unsown steppes – and backed him during a failed attempt by the Stalinist hardliners to remove Khrushchev from power. Before long, Brezhnev was named a full member of the Politburo – the central policymaking body of the Communist Party. 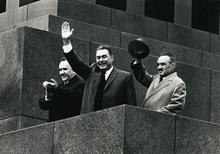 But as Khrushchev became increasingly unpopular with the party elite, Brezhnev got involved in the plot by a conservative coalition to oust him from office. After his mentor’s fall in 1964, his former protégé became one of the top men in the USSR. Gradually, Brezhnev emerged as the dominant political force, taking the title of the Communist Party’s General Secretary.

Brezhnev’s era came as a stark contrast to Khrushchev 's turbulent rule. The country entered a decade-long standstill, its rigid economy slowly weakening and its political climate growing increasingly pessimistic. Bureaucracy and corruption flourished, the KGB regained much of the power it had enjoyed under Stalin, albeit without the return to the purges of the 1930s and 1940s.

Years of neglect both on the farms and in the factories, led to shortages of food and consumer goods. Enormous spending on the armed forces and the prestige projects, like the space programme, put a further strain on the struggling economy. The living standard dropped and Soviet citizens had to queue even for basic necessities. The result was a huge shadow economy, providing limited goods and services. 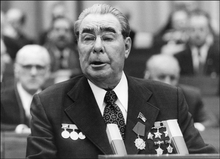 On the international arena, Brezhnev was a committed Cold Warrior, supporting left-leaning regimes throughout the world, most notably in Vietnam, the Middle East and the Third World. In 1968, Soviet tanks rolled into Prague, crushing a brief wave of political liberalisation known as the Prague Spring. In a speech justifying the move, Brezhnev spelled out what was called the “Brezhnev Doctrine” – Moscow’s right to intervene in the affairs of other socialist states.

A brief warming-up of relations with the U.S began in 1972, when Brezhnev and U.S. President Richard Nixon signed the Strategic Arms Limitation Treaty (SALT), freezing certain U.S. and Soviet weapons systems. But the new era known as “détente” was short-lived – relations worsened again after the start of the Soviet War in Afghanistan in 1979 and the election the following year of Ronald Reagan, a staunch anti-communist, to the U.S. presidency. 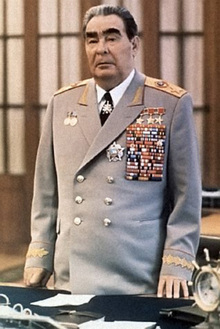 Still, despite the economic decline at home, the 1970s saw the USSR’s international influence peak. For the first time the Soviet Union also became a global naval power. Shortly before Brezhnev’s death, Moscow dazzled the world with arguably the biggest extravaganza of Soviet times: the 1980 Summer Olympics.

The last years of his rule were marked by a growing personality cult, widely seen as hollow and cynical. Brezhnev was well known for his weakness for flattery and a love of medals – the final count stands at 114, more than Stalin and Khrushchev both had. When Soviet leaders were buried, it was a custom to bear each of their medals on a small velvet cushion behind the coffin. At Brezhnev’s funeral, his numerous awards had to be fitted several at a time on a single cushion, all of them carried by more than 40 officers.

Brezhnev was described by his family and colleagues as energetic and cheerful, known as a reckless driver and a keen hunter. He also wrote poetry and was a great womaniser. Being married to his wife Victoria for almost sixty years didn’t stop him from having numerous conquests.

Yet, most Soviet people remembered him as an ailing and mumbling old man. His increasingly failing health was a taboo subject for the Soviet press but was obvious at his public appearances, his slow speech and movements making the Soviet leader the target of a zillion jokes. By the end of 1970s he was always accompanied by doctors and developed an addiction to sleeping pills.

The end of Brezhnev glory era

When he died of a heart attack on November 10, 1982, aged 75, Brezhnev was honoured with one of the largest and most impressive funerals in the world. A four-day nationwide mourning was announced. As his body lay in state, a long queue of mourners shuffled past. The ceremony was broadcast on every television channel. The front row of seats was reserved for the dead leader’s family – his wife and their two children, Galina and Yuri.

When Brezhnev passed away, the Soviet Union itself had less than 10 years to live. But despite economic decay, Brezhnev’s “stagnation” was fondly remembered by many Soviet people as the time when the USSR reached unprecedented power, prestige and internal stability, and is still seen in Russia as one of the best periods of the country’s 20th century history.