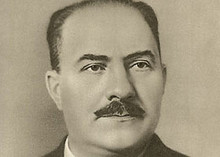 Lazar Kaganovich was a Soviet statesman and  Stalin’s right hand man at one point, but was later expelled from the Communist Party by Khrushchev. He built the magnificent Moscow metro and introduced the state pension system, but also sent thousands to their death during the Purges and destroyed many important historical monuments.

The revolution of a shoemaker

Lazar Kaganovich was born in November 1893 in Ukraine, near Chernobyl. His family was Jewish, living within the pale of settlement established by Catherine the Great nearly a century earlier. There were limited possibilities for Lazar’s future in the settlement, so he apprenticed under a shoemaker from a young age. Later he went to work at the leather factory where his elder brother had been working and joined the revolutionary movement.

Kaganovich’s Bolshevik career was similar to that of other prominent leaders – it consisted of a circle of underground resistance, propaganda, recruitment, arrests, and exiles. After the revolution, Kaganovich received a post in Turkmenistan, where Joseph Stalin happened to be his superior. They worked well together, and this cooperation later grew into a steady tandem. He was far inferior to Stalin, both in age, experience, and education, of which he had none, so he was quite content to be taken under the wing of such a rising star. 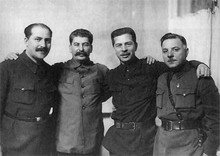 In 1922, Stalin was elected the General Secretary of the Communist Party, and he took his loyal subordinate to work in the holiest of holies - the Organizational Department of the Secretariat, where he essentially controlled all the human resources of the party. After Lenin’s death in 1924, Kaganovich became one of the secretaries of the Central Committee of the Communist Party.

For a thirty-year old self-taught amateur, this was a head-spinning rise to power, and Kaganovich knew very well that he owed it all to Stalin, and not his own merits. As for Stalin, his goal was to build a team who would support him unconditionally.

After Stalin had secured his position as head of state, his next struggle was with the Trotskyites, recruiting Kaganovich in his fight against them. Perhaps Kaganovich was driven by a need of personal revenge against Trotsky; Stalin was well aware that there was great animosity between the two.

At the time it was more prestigious to have a reputation of being a good ideologist rather than a good organizer or administrator, so many leaders fell under the temptation to become connoisseurs and interpreters of Marxism. Kaganovich was no exception. The former shoemaker was very proud of his first book and eagerly autographed the copies he presented around. While everyone “gratefully” accepted the gifts, Trotsky, leafing through the first few pages, commented on the book by calling Kaganovich a failure and branded his book a mediocrity.

In 1925, Kaganovich was sent to his homeland to head the Ukrainian Central Committee of the Communist Party. He was a rather harsh leader, choosing extremely violent means of bringing the population under the Communist rule. 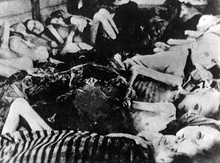 His methods included the collectivization of private farms, the expropriation of wheat, and the ruthless arrests of the kulaks. This led to what is known as Holodomor in Ukraine - the massive starvation of millions of people (up to some 7 million by some estimates), which the current Ukrainian government has ruled genocide.

In an effort to build up the Ukrainian economics, Kaganovich focused his efforts on the coal mining industry in the east of the country, which still makes up a large part of the country’s economy today.

One other area of restructuring was personnel policy. He totally replaced the old Tsar era leadership with young Communist activists, many of whom came from Jewish settlements and yearned to break free from the limitations of settlements in the pale. Little by little, Kaganovich earned himself the nickname of “Iron Lazar.” His reputation extending far beyond Ukraine, Kaganovich was soon recalled to work in Moscow.

Gorky, Voroshilov, Kaganovich, Stalin on the tribune of the Lenin mausoleum.

In 1930 Kaganovich became a full member of the Politburo, which formally and practically made him the second man of the USSR for the next five years. Stalin trusted him so much that each year when he was on vacation, he left all affairs of the country in the hands of Kaganovich.

Kaganovich also launched a major reconstruction of Moscow. He destroyed the magnificent Cathedral of Christ the Savior, as well as many other historical monuments of the city. Rumors have it that he even had suggested demolishing St. Basil’s Cathedral on Red Square, however, Stalin decided it was not necessary.

Kaganovich is credited with building the Moscow metro system. No expense spared, the underground stations were works of art, and they could also function as bomb shelters, which became rather convenient a few years later when World War II started.

In 1935 he was made Minister of Transport – the weak link in the USSR economy, and therefore, Kaganovich was happy to accept the position even though technically it was a downturn in his political career.

He tackled the problems within the Transport Ministry from two sides. First, he announced that the most important thing for transportation was safety, and therefore every accident bore somebody’s name. He abandoned the idea of collective responsibility and demanded to be personally informed of all cases of failure, theft, or mismanagement, sending the “saboteurs” to labor camps in the thousands.

At the same time, he made employment at the railroad service extremely prestigious by extending social benefits to transportation workers – free uniforms, high salaries, a system of bonuses, and even small land plots, which at the time was a revolution of its own. He used his position of ex-Secretary of the Central Committee wherever possible to lobby his jurisdiction and gain additional government means in the bitter struggles with other ministers.

Kaganovich was also the first to introduce the old age pension in the USSR. This was something unheard of before his times, because even in Tsarist Russia pensions were given only to statesmen, while Kaganovich extended it to everyone once they reached old age. 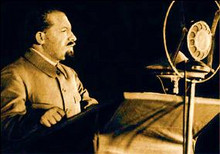 Like all of Stalin’s supporters, Kaganovich played his part in the mass repressions, deportations, and purges. He signed nearly half of all the death sentences, and easily disposed of his subordinates, friends and even relatives when it was necessary. On numerous occasions he was sent to different regions of the country for “revision,” which ended up in repressions and sentences to labor camps. Later, during Khrushchev’s rule, Kaganovich was accused of signing death sentences for a total of 36 thousand people.

He made no exceptions, even for his brother. Mikhail Kaganovich, then Minister of Aviation, was accused of anti-Soviet activities, but Lazar “washed his hands” of the case, knowing very well that his brother would face trial. He did warn Mikhail of the upcoming arrest, however, Mikhail shot himself beforehand, and the arrest never occurred.

The sunset of the Kremlin Wolf

Kaganovich turned out to be a hero during World War II, as he was the only member of the Politburo who happened to receive an injury in battle. It happened in 1942 when he was organizing the defense system of the Caucasus. The command office where he worked was bombarded and, unlike several generals who were killed, Kaganovich got away with mere injury. 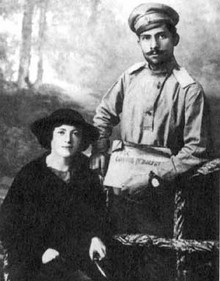 L. Kaganovich with his spouse

After the war, however, the golden era of “Iron Lazar” had come to an end. He was no longer the favorite in Kremlin circles, and he was rarely invited to meetings and briefings. In 1946 he was lowered to the post of Minister of Industry.

During the 1930’s Kaganovich mentored Nikita Khrushchev, and is largely responsible for bringing him to the big political stage. A few decades later, his protégé ascended to heights too far even for Kaganovich – Khrushchev became the General Secretary of the Central Party, the top man of the USSR.

By that time their relationship had become too complicated, as Khrushchev was no longer a tame servant, waiting on his master. In fact, he was very much geared to expose the atrocities of Stalin’s personality cult, of which Kaganovich had been an active supporter. As a last effort to seize power, Kaganovich collaborated with Malenkov and Molotov in organizing a group against Khrushchev.  However, the coup failed, bringing his career to an end.

Kaganovich was completely stripped of all his titles and positions, and even expelled from the Communist Party. Moreover, he was accused of organizing the mass repressions of the 1930’s. Fearing a prison sentence, Kaganovich sent a letter to Khrushchev begging him for mercy.

His wife Maria, with whom he lived for 50 years, died around the same time, so it was a particularly hard period for him. Kaganovich spent the remaining years of his life living like recluse (albeit on a personal state pension) in his home at Frunzenskaya Embankment in a prestigious Moscow district, writing memoirs.

Kaganovich lived to the old age of 97, dying on July 25, 1991, just a few months before the fall of the USSR, the great empire he helped build from the beginning.  He is buried at the Novodevichy cemetery, next to his wife.