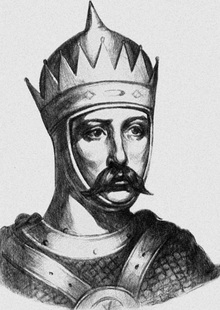 Yury Dolgoruky is one of the most contradictory and turbulent figures in Russian history. The Prince of the Rurik Dynasty played an important role in the transition of political power from Kiev to Vladimir-Suzdal. Yury Dolgoruky is also considered the founder of Moscow.

Yury Dolgoruky was the son of Vladimir Monomakh, the famous Grand Prince of Kievan Rus. It is not certain who Yury’s mother was. Some historians say that he was born to Vladimir Monomakh’s first wife Gytha of Wessex, who was the daughter of Harold II, the last Anglo-Saxon king of England. Others speculate that Yury was the son of the second wife of his father, but her name is unknown.

Yury Dolgoruky originated from the Rurik Dynasty. His father’s reign designated the end of the Golden Age of Kievan Rus, when this medieval state was the chief political and cultural centre of Eastern Europe. The Rurik Dynasty had a special system of succession, in which the Kievan throne was passed not linearly from father to son, but laterally from brother to brother. Being the sixth son of the Grand Prince, Yury Dolgoruky had to wait a long time before becoming the main ruler of the country.

Yury Dolgoruky started his political activity as the ruler of the Rostov Principality. In 1125 Yury moved his capital from the town of Rostov to Suzdal, and soon he became the first independent prince of Northern-Eastern Rus.

As it declined, Kievan Rus splintered into many principalities and several large regional centers: Chernigov, Galich, Novgorod, Pereyaslav, Polotsk, Smolensk, and Vladimir-Suzdal. The Vladimir-Suzdal principality, which was formed and enforced by Yury Dolgoruky, gradually occupied a vast territory in the North-East of Kievan Rus. The creation of these regional centers is historically important as the basis of the future development of three nationalities: Ukrainians in the southeast and southwest, Belarusians in the northwest, and Russians in the north and northeast.

From 1132 when his oldest brother Mstislav, the Grand Prince of Kiev, died, Yury engaged in the process of conquering the lands to the south of his domain. The nickname “Dolgoruky” (“Long-Armed”) was given to him due to his constant encroachment upon other lands: he captured numerous towns and lands along the Volga River and conquered the state of Volga Bulgaria. While widening his territory, Yury Dolgoruky built fortresses and founded numerous towns. Trying to gain more lands, he actively took part in intensive negotiations and deals, allying with one prince against another.

Yury Dolgoruky’s name is traditionally associated with the foundation of Moscow. According to historical records, during one of his trips, Yury stopped at the village of Kuchkovo, which belonged to the noble boyar Stepan Kuchka. When Kuchka insulted him, Yury Dolgoruky ordered him killed and confiscated the boyar’s land. The village of Kuchkovo was situated on a high hill near the confluence of three rivers (one of them being the Moscow River). Yury, presumably, considered this place to be a good stop for an outpost, and he ordered a fortress built there.

In 1147, while returning from one of his military campaigns, Yury sent to Svyatoslav Olgovich, his relative and ally, an invitation: “Come, brother, to see me in Moscow!” This first written mention of the future capital of Russia is traditionally considered to be the agreed date of Moscow’s foundation. Still, some historians state that Yury was not the founder of this city. According to historical records, Yury Dolgoruky organized a big feast for his guest Svyatoslav Olgovich, meaning that Moscow already existed by that time, and it was a town big enough to accommodate an armed force and organize a big celebration. 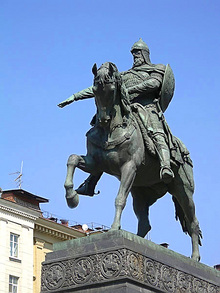 According to written records, in 1156 Yury ordered that Moscow be fortified with a moat and wooden walls. This task was completed by Yury’s son Andrey Bogolyubsky.

As a politician, Yury Dolgoruky skillfully combined negotiations and military campaigns. He tried to enforce his power by giving his captured lands to his sons, though never being loved or supported by the locals.

Throughout his life Yury yearned to become the Grand Prince of Kievan Rus. One of Yury’s main rivals was his nephew Izyaslav, who broke the rota system, and took the throne instead of Yury’s older brother Vyacheslav. Yury Dolgoruky, considering himself the lawful heir, tried to capture Kiev many times. Three times he managed to gain the throne (in 1149, 1154 and 1155); the first two times he had to retreat while the third time, in 1155, he won and remained as the Grand Prince until the end of his life.

In May 1157 Yury was invited to a big celebration at the house of a Kievan nobleman. After the feast, the Grand Prince, presumably poisoned, felt unwell and soon died. The people of Kiev always considered Yury to be an “alien” from the north and didn’t like him because of his hunger for power and violence. The news about his death triggered an uprising in Kiev. Yury Dolgoruky’s mansion was plundered and his son Vasilko was chased out of the city. Yury was not allowed to be buried next to his father.

Though his reign as the Kievan Prince was not successful, Yury Dolgoruky’s Vladimir-Suzdal principality became an important political unit in Russian history. It succeeded Kievan Rus as the most powerful Rus state in the late 12th century and lasted until the late 14th century. Traditionally perceived as the cradle of the Great Russian language and nationality, Vladimir-Suzdal gradually formed the core of modern Russia.

Yury Dolgoruky was married twice. His first marriage, with the daughter of a Cuman Khan Aepa, was arranged by Yury’s father on political grounds. His second wife was called Olga (or Helena), and, according to various legends, she was either a daughter or a sister of the Byzantine Emperor John II Komnenos. Yury Dolgoruky had thirteen (other sources mention fifteen) children.