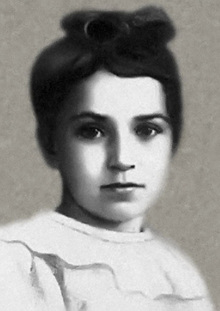 Tanya Savicheva only lived for 14 years, but she left behind a heritage. She survived the Siege of Leningrad during WW2 and left evidence of the Nazis’ crimes that was used during the Nuremberg Trials.

She left behind a diary of nine pages and very few words, the most frequently used – death.

Tanya was the youngest child in her family. She had two sisters, Nina and Zhenya, and two brothers, Mikhail and Leka. Her father, Nikolay Rodionovich Savichev, was a baker and her mother, Mariya Ignatievna Savicheva, a seamstress. The family was going to spend the summer of 1941 in the countryside but the Axis invasion of the Soviet Union ruined their plans. Only Mikhial, Tanya’s brother, left earlier while the rest of family stayed in Leningrad. They all worked hard - Mariya Ignatievna sewed uniforms, Leka worked as a planner at the Admiralty Plant, Zhenya worked at the munitions factory, Nina worked at the construction of city defenses, and Uncle Vasya and Uncle Lesha served in the anti-aircraft defense. Tanya, then 11 years old, dug trenches and put out firebombs.

Zhenya, who is not mentioned in the diary, died at the factory. She had worked two shifts in a row and when she went to donate blood afterwards, her body wasn’t strong enough. Then the other members of Tanya’s family passed away, with two siblings missing. Tanya never found out that not all the Savichevs died and that the missing ones had survived the siege.

Tanya’s brother Misha suffered severe injuries in the war but survived. Because of a dispute with his family, he never contacted Tanya. Tanya’s sister Nina went to work one day and never came back, so the family thought she was dead. But Nina was sent to Lake Ladoga and then urgently evacuated.

In fact it was Nina who found the notebook amidst the bare walls and complete ruins when she returned home after the war. Nina gave the diary to a journalist from the “Komsomolskaya Chronics” newspaper. Later, the diary was used in the Nuremberg Trials. Today it is on display in St. Petersburg, in the Museum of Leningrad History.

Tanya didn’t live long after the siege. She was discovered by special nursing brigades searching houses around Leningrad. She was one of 140 children who were rescued from Leningrad and brought to an orphanage in Krasny Bor village in August 1942. All of them survived, except Tanya. She was in poor health and was sent to Shatkovsky Hospital. Doctors battled for her life for two years but a deadly disease had began its process in her body. She died of intestinal tuberculosis on 1 July 1944 and was buried at the village cemetery. A copy of her diary is also kept in the cemetery’s archive. In 1972 a memorial was constructed in her honor in the village where she was buried and later it was expanded into a memorial complex. She was one of 570 thousand people who died during the 900-day blockade of Leningrad. And her diary became an iconic image of the victims of the siege.

Tanya started her diary a little earlier than Anne Frank (1929 - 1945). She also died a little earlier than Anne, a Jewish German girl who became famous after the publication of her diary, which documents her experiences hiding during the German occupation of the Netherlands in World War II. “The Diary of Anne Frank” was published all over the world and she has become one of the most renowned and most discussed victims of the Holocaust. “The Diary of Tanya Savicheva” was not published at all – it contains only seven scary notes about the deaths of her family members in Leningrad at the time of the blockade.

But in 1971 a Soviet astronomer discovered a minor planet and named it “2127 Tanya” in honor of Tanya Savicheva.

Nestor Makhno Nestor Ivanovich Makhno was the leader of revolutionary anarchism, known for both his cruelty and his acute sense of justice.