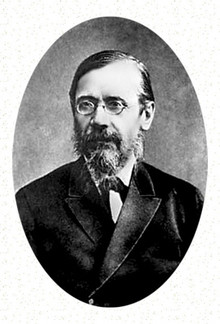 Vasily Klyuchevsky was a Russian historian, professor of the Moscow State University and author of an extensive 5-volume Course of Russian History based on his lectures. His course remains one of the most comprehensive sources on the subject to this day.

Klyuchevsky was born into the family of a poor country church priest. His father died when Klyuchevsky was only 9 years old. He was found dead on the road after a thunderstorm. While the exact cause of his death wasn’t established, it shocked the little boy so much that he started stammering.

The family had to move to the nearby town of Penza, where one of the priest’s friends gave the Klyuchevskys a small house to live in. “Was there anyone more poor than us at the time when we were left orphans in the hands of our mother?” wrote Klyuchevsky to his sister later, remembering the hungry years of his childhood and youth.

In Penza, Klyuchevsky studied at a religious school, and then at a seminary. During his studies at the school, his stammering was so bad that had it not been for his bright mind and the pity of the teachers, he would not have received an education. However, a relative of his classmate practiced speech therapy with him, which greatly helped the problem and allowed Klyuchevsky to graduate with honors and enter the seminary.

While at the seminary, he discovered a fascination with history and read many historical works. He had a passion for researching the past and decided to dedicate his life to history – he quit the seminary while in his last year and spent the rest of the year preparing for entrance exams to the university.

In 1861 Klyuchevsky entered the Moscow University, which began a whole new period of his life. He was thriving in the academic environment shaped by the brightest minds of Russia. The time of his studies at the University also coincided with the great reforms of the 1860’s.  Klyuchevsky held neutral ground – he didn’t support the extreme measures of the government, and also stayed away from mass protests organized by students.

His graduation essay was titled Foreigners’ Accounts of Russia. Klyuchevsky researched more than 40 records and accounts of foreigners during the 15-17th centuries in Russia. For this work, Klyuchevsky was awarded a gold medal and was made to stay at the faculty in preparation for the position of professor.

His Master’s degree paper was dedicated to The Old Russian Hagiography as a Historic Source. The former seminary student used his knowledge to extract historic information out of old scriptures describing the lives of saints. In particular, he was interested to know the role of monasteries in colonization of Russian lands. His truly titanic work included the study of some 5 thousand records. While preparing for his thesis he also wrote 6 other independent research papers. Despite all his effort however, the result was poor – the literary standard for describing the lives of saints followed a strict pattern, leaving no room for details regarding the context, or the concrete place and time of events, which made it impossible for researchers to rely on them as historic sources. 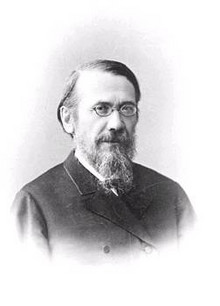 After defending his thesis, Klyuchevsky received the right to lecture at the highest educational facilities.  He lectured at military schools, in a religious academy, at a women’s school, and at an art school. Starting in 1879 he taught at the Moscow University replacing his late professor in the Faculty of Russian History.

In 1869 he married Anissya Borodina, who, like Klyuchevsky, came from a religious background. Together they had one son, Boris.

Klyuchevsky certainly mastered this skill, for he became a brilliant lecturer and a consummate stylist of historical prose. His students simply adored their professor. He had a gift of penetrating into the past and was able to retell it in a skilled and witty manner. During his lectures he built whole galleries of historic figures, bringing them to life in the minds of hundreds of listeners. On the days when he was supposed to teach, all other professors could count on a break, knowing they would lose their students to Klyuchevsky.

Here is an account by one of his contemporaries, who attended Klyuchevsky’s lectures.

“Long before the start of a lecture countless number of listeners gathered at the door of the auditorium – philologists, law and medical students, mathematicians and scientists – from all semesters and levels. “Are you here for Klyuchevsky?” one could hear in the crowd “Yes, of course. He is the only one I make an effort to attend.”

In order to get into the auditorium and get a seat, some students would come early in the morning and wait patiently for the “blessed hour.”

Finally the professor would appear … an old, stooped man stepping up onto the platform, looking somewhat shy about the attention and applause of students.

A few minutes pass… the audience quiets down and Klyuchevsky’s voice, slow and clear begins to unfold another story: “Peter the Great was a giant… almost 7 feet tall. His figure stood out in the crowd even from a distance. It gave him a backache when he had to bend over while crossing himself at an Easter service…”

The audience would be so taken by the story one could hear a pin drop. No matter the subject of the lecture, Klyuchevsky gave you the feeling that you were traveling in time – witnessing firsthand the most important events in the Russian history...

Giving so much, he expected much of his students – rarely satisfied with satisfactory knowledge of his subject. However, he remained simple and approachable even when his fame extended far beyond Russia.”

Kluychevsky was so popular that Emperor Alexander III invited him to teach Russian history to his son, Prince Georgy, who had been to the Caucasus for tuberculosis treatment.  Klyuchevsky’s trips to the region were a major distraction from the main work of his life – research, writing and chairing the Faculty of Russian history at the Moscow State University. Unfortunately the history lessons did not profit the heir to the throne - Prince Georgy died in 1889.

Klyuchevsky’s speech was amazingly simple and clear. He used to say that people complicate matters which they don’t understand. Also his view of Russian history was far from idealistic – it was realistic and sometimes even ironic. Despite his great fame and financial wellbeing, he retained his simple lifestyle. When offered a carriage with horses by one of his student’s parents, he declined the gift, saying he’d look like a peacock. His dress was also so modest that he could be easily mistaken for a clerk of a little office.

Klyuchevsky’s doctorate thesis was called The Boyar Duma of Old Russia, it was even published in a magazine called Russkaya Mysl (Russian Thought) in 1882. He then published more of his research works – The Russian Ruble in the 16-18th centuries and its Relation to the Current, as well as The Genesis of Serfdom in Russia, published in 1885, in which he suggested a new concept of the origin of serfdom. According to this concept, serfdom was engendered by peasants' debts to landowners and developed on the basis of private-legal relations, with the state only legalizing it.

Poll-Tax and the Abolition of Bond Slavery in Russia, in which he showed that a purely financial reform had serious socio-economic consequences, was published in the same year. The last of his major works was called The Composition of Representatives at Assemblies of the Land in Old Russia.

In 1900, Klyuchevsky was elected to be a member of the Russian Academy of Sciences.

Even though Klyuchevsky never liked politics, his broad knowledge of history allowed him to understand and interpret the current events. Having witnessed the 1905 revolution preceded by multiple reforms in the country, he accurately predicted the fall of the Romanov dynasty and the Bolshevik revolution of 1917: “Nicholas II is the last Tsar to rule Russia. Even if he has a son, he will not become the next ruler.”

In 1905 Klyuchevsky became a member of a Cadet Party (the party of constitutional democrats) and, as a representative, ran in the elections to the State Duma. However, he was overcome by his rival. Later he was suggested to become a member of the State Council – an offer he declined. Later he admitted that his part in the election was simply his giving in to the great number of requests of his supporters.

The Course of Russian History

The Course of Russian History

“History doesn’t teach any lessons, but greatly punishes one for not learning them,” was one of Klyuchevsky’s sayings. Perhaps that’s why he spent all his life studying and teaching history. His greatest work which once and for all established Klyuchevsky as the highest authority on the history of Russia and won him worldwide recognition is The Course of Russian history in 5 parts. He spent 3 decades working on it, and published it only in the beginning of 1900’s. The course covers Russia’s history from ancient times to the middle of the 19th century. According to his theory, the greatest factor influencing Russian history was colonization. “The history of Russia is a history of a country that colonizes. The territory of colonization expanded along with its state borders. With rises and falls, this ancient motion continues all the way unto our days,” he wrote.

Based on this theory, Klyuchevsky divided Russian history into four periods that corresponded with major expansions of its territory. He also focused on the significance of geographical conditions for the historic development of a nation.

Klyuchevsky had completed only 4 parts bringing his course as far as Peter III. He died in 1911 while preparing the last part to be published. Based on his diaries and previous lectures, his students finished and published the volume.

To this day it remains one of the main works on the history of Russia, educating many generations. The influence of his Course has far surpassed the study of history, and has become an integral part of basic Russian education.