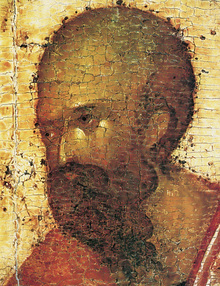 Theophanes the Greek was a Byzantine Greek artist and famous icon painter of Muscovite Russia. He belongs to the greatest masters of medieval times.

Theophanes the Greek is believed to have been born in the 1330s in the capital of the Byzantine Empire, Constantinople, and to have died between 1405 and 1409. Before coming to Russia he was educated in his native town and later on worked in Constantinople, Chalcedon, Galatia and Kaffa (now Feodosia in the Crimea), where he decorated many churches. Unfortunately, his works completed in Byzantium did not survive. All his preserved and known works were produced in Rus (ancient name of Russia), where he spent more than 30 years. During his lifetime he decorated more than 40 churches.

His manner of painting originates from the Macedonian school (or Greek-Slavonic art), popular at the end of 14th and first half of the 15th centuries in Serbia and the Byzantine Empire, and characterized by a distinctive regard for both the subject and the style, penetrated by a mystical spirit. The subject was ecstatic and the method of painting subjective and dynamic. All this found reflection in Theophanes’s drawings, which display something spiritually titanic; his images seem to be the personification of world tragedy.

In medieval times it was common both in Rus and Europe for foreign painters to work abroad for several years. Theophanes the Greek followed this path and, in his forties, he went to work in Novgorod and later in Moscow. It is believed that Theophanes met Russian metropolitan Kiprian in Constantinople who inspired this move and accompanied the Greek to Russia.

Novgorod had always been a very important Russian city and one of the most ancient cultural centers. But because of its northern location, for a long time after the Mongol-Tatar invasion in 1237-1240 it remained completely cut off from the south. During this period the city lost its leading role in cultural life and the famous Novgorod school was degraded to the level of a provincial school, reproducing bad models before it developed again. The Novgorod school owes its rebirth to Greek painters and carpenters, who had been invited to work in the city and with their contribution the school flourished in the 15th century.

Theophanes the Greek arrived in Novgorod in the 1370s. Highly educated and talented, he brought the greatest achievements of Byzantine culture and art to Rus. Russian painters were greatly impressed by Theophanes’s work. One monk observing Theophanes at work noted his “high mind” and later wrote that Theophanes painted only from his thoughts. In Novgorod the first mentioned work by Theophanes dates back to 1378. This work, murals in the Church of Transfiguration on Ilyin Street, is the only one that has documented confirmation and is the basis for art historians for identifying his other works. The frescos nowadays exist only in fragments; therefore it is not possible to restore the system of painting completely. At the church’s cupola there is a half-figure of the Pantocrator surrounded by archangels and seraphs. In the cylindrical area, straight under the cupola, the images of the forefathers and prophets are represented. The side altar is decorated with images of the saints along with compositions such as Trinity, Pillar Saints, Virgin Mary with Archangel Gabriel and others. 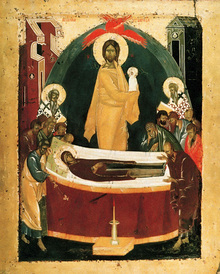 The painting of Theophanes is characterized by the Russian art historian Vasily Bychkov as “a philosophical conception in colors, a conception, which is stern enough, far from everyday optimism. The essence of the conception is the global sinfulness of man, as a result of which he distanced himself from the Lord and now could only with fear and horror await the coming of his uncompromised Judge. Theophanes the Greek creates a world full of drama and tenseness of spirit. His saints are stern, aloof, absorbed in contemplation and thoughts of the Savior.”

Theophanes’s manner was highly expressive and free. He used various methods of painting. He did not go into great detail while composing the form and painted in saturated and free strokes. The subdued general color contrasted with bright bleachings, refreshing the stern images of the saints.
The contours were marked with clear dynamic lines. The color palette was restrained with dominating orange-brown, silver-blue colors underlining the tense spiritual state of his images. Theophanes’s works were a combination of the local style with the style of Constantinople. Theophanes’s individuality was exceptional for Russian art and could not be imitated, but some Novgorod icon painters tried to follow this method. Thus, the painter’s free style and choice of colors can be seen at the Dormition Church at Volotov Field and the church of Fedor Stratilat decorated by local painters. Theophanes also contributed to the development of art and book graphics, designing such well-known manuscripts as Psalter of Ivan Grosny (late 14th century) and Pogodin’s Prologue (2nd half of the 15th century). 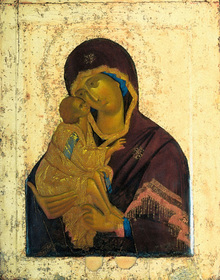 After 1378, according to some chronicles, Theophanes the Greek worked in Nizhniy Novgorod, which was badly destroyed and in need of rebuilding after the Mongol-Tatar yoke, and in Kolomna. But the works of that period did not survive. In Kolomna he may have decorated the Assumption Cathedral, where his most famous icon The Virgin of the Don (on the back the Dormition) was first preserved and later moved to The Annunciation Cathedral in Moscow.

In approximately 1395 Theophanes moved to Moscow where he decorated churches, private houses, designed book manuscripts and painted icons. The most trustworthy information about the Moscow period can be found in a letter from the chronicles written by Epiphanios the Wise, a famous 14th-15th century Moscow writer and painter who knew Theophanes well and admired his work, “…in the state treasury of Prince Vladimir Andreevich (Serpukhovsky) he depicted Moscow on the stone wall, and the prince’s terem (the small chambers) is decorated unprecedentedly and unbelievably beautifully.”

In the same letter he also described Theophanes’s method of work, which was apparently quite extraordinary for the time: “When he was drawing or painting, nobody saw him looking at existing examples, as would do some of our icon painters. He, on the contrary, appeared to paint his frescoes with his hands while walking back and forth, talking to visitors, considering inwardly what was lofty and wise and seeing the inner goodness with the eyes of his inner feelings.”

Theophanes's first Moscow work was the Book of Gospels of Boyar Koshka, for which he painted miniatures and which would later be used as the basis of the Khitrovo Gospels. Later he decorated the walls and ceilings of many churches with frescos including the Church of Virgin Nativity (1395) and the Archangel and Annunciation Cathedrals (1399 and 1405) in the Moscow Kremlin. He painted the Annunciation (Blagovezhensky) Cathedral with Andrei Rublev and Prokhor from Gorodez. Theophanes invited Rublev to assist him in the painting of the murals and in the process did wonders to develop Rublev’s genius. However Rublev would later break away from Theophanes’s dramatic severity of form, color and expression and become one of the greatest masters of Russian icon painting.

Theophanes’s style in icons differed greatly from his style in murals. In icon painting he mainly used beautiful and saturated colors and pure forms, laying the foundations for mature Moscow icon painting. Theophanes must have painted many icons throughout his life, but based on historical evidence, scholars believe that the following nine are his: The Virgin of the Don and The Dormition of the Virgin (Novgorod period), The Savior in Glory, The Virgin Mary, St. John Chrysostom, Archangel Gabriel, St. Paul, St. Basil, and St. John the Baptist, all of which were painted in 1405 for the Deesis tier in Moscow’s Cathedral of Annunciation. It was the first iconostasis in Russia in which the figures of the saints were presented at full-height. At two meters high, the figures are impressive and full of significance and incarnate a prayer from mankind to the Savior. According to recent evidence though, this iconostasis might not be the original of 1405 and could have been brought to the Annunciation Cathedral after its restoration in 1547, when a devastating fire destroyed most of the icons. Nonetheless, the iconographic style, the use of various difficult drawing methods and the high spirituality of the icons suggest that they were painted by the talented master Theophanes.

The most striking aspect of Theophanes’s work was that through his paintings he managed to deliver a spiritual message to the parishioners of the 14th-15th centuries, most of whom could not read or write, but were able to perceive the subtleties of the complicated theology with their own eyes.

Some historians believe that at the beginning of the 15th century Theophanes returned to Constantinople but there is no confirmed evidence of this. It is suggested that Theophanes the Greek died between 1405 and 1409.