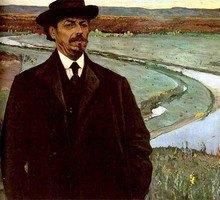 Mikhail Nesterov was a Russian artist known for his religious paintings.

Nesterov was born into a merchant’s family and was set to follow in his father’s footsteps, but quite soon it became clear that he was not destined to become a successful businessman. Helping in his father’s shop, Nesterov, as he would later recall, “felt alienated and useless, unable to sell anything but baby dolls and foil to decorate icons”. He would soon discover he was interested in art instead.

When Nesterov was ten years old, he went to the local gymnasium in Ufa and spent two years studying there. But low grades and bad behavior were the reason his parents eventually sent him to Moscow to attend the technical college there: they were sure that independence would make Mikhail more responsible.

Nesterov failed all his exams except drawing, calligraphy, and religion, and went to the non-classical secondary school instead. The schoolmaster noticed Nesterov’s gift for painting, and talked him into entering the Moscow School of Painting, Sculpture and Architecture. Nesterov’s favorite teacher there was the master painter Vasily Perov. Perov’s canvasses depicted Russian everyday life in a satirical and tragic manner. 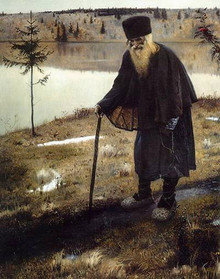 Nesterov’s early works were also dedicated to everyday life. Later, he began to paint Russian history, especially pre-Petrine times, becoming a rather well-known, though not affluent historical painter. The famous artist Ivan Kramskoy criticized Nesterov’s paintings during this period, saying that history was not really Nesterov’s thing and that Nesterov should keep looking for his real vocation.

In 1885, Nesterov married Maria Martynovskaya, and a year later his beloved wife died in child birth. This tragedy made Nesterov rethink his life, his art, and experience a spiritual transformation.  “My love for Maria and the loss of her turned me into an artist and put the sense, emotion, and soul I was missing before into my art; in other words, everything that people valued and value in my paintings”.

The first significant piece created by Nesterov after Maria’s death was The Hermit, painted in 1888 – 1889. It depicted an elderly monk, cautiously walking along the lakeside. He is surrounded by the late northern autumn. The lake is calm and clear; the first snow lies upon the ground, and on the withered yellowish grass, only a bright-red cluster of rowan-berries challenges the upcoming winter.

Upon seeing The Hermit, critics acknowledged Nesterov as one of the best artists of his time. The painting was bought by the art patron Pavel Tretyakov, the owner of the Tretyakov Gallery. With the money he earned, Nesterov went to Europe, visited Italy and was deeply inspired by the inner spiritual forces of Renaissance art. After his return, Nesterov started to work on his most famous picture, Vision of the Young Bartholomew. 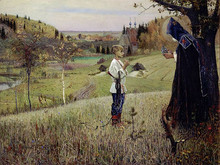 The plot of the painting is based on a Christian legend about a young boy who had problems reading. One day his father sends him to search for some runaway horses, and on his way the youth meets an ascetic. Bartholomew greets him, asks for his blessing and receives one. After that encounter, not only did Bartholomew learn how to read, but he also became a poet. He went down in history known as St. Sergius of Radonezh.

In the picture one can see Bartholomew looking at the monk with hope on his face. The monk’s head is surrounded by a transparent halo. The characters stand against an early autumn landscape with hills and brightly colored trees in the distance. It almost seems the viewer can feel the touch of the cool fresh air and hear the solemn silence which surrounds the boy and the saint.

This work became a sensation, and was also bought by Tretyakov immediately after being exhibited. Nesterov said about his painting, “If ‘The Young Bartholomew’ is to say anything to people thirty, fifty years after my death, then this picture will be alive, and therefore, I will be alive”. His hopes came true: the painting still makes people think about God’s miracles and the closeness of supernatural, apart from merely exhibiting Nesterov’s talent.

In 1890, Nesterov moved to Kiev, and spent twenty years painting the walls of Kiev churches. In 1901, he visited the Solovki Monastery on the White Sea and painted many pictures dedicated to monastery life. None of them depicted the luxurious church interiors of bishops in gilded vestments, however: Nesterov’s preferred subjects were common monastic dwellers and the severe northern nature.

On the banks of the cold sea, Nesterov found the inspiration for his next well-known work: Saint Russia. It was exhibited in 1902 in Kiev. This painting depicts Jesus Christ surrounded by pilgrims, standing against a winter landscape. Interestingly enough, a woman who came to see this painting soon became Nesterov’s second wife.

The last canvas Nesterov painted before the October Revolution of 1917 was named The Soul of the People. A procession of peasants and nobles, men and women, walks along the banks of Volga River, following a young boy with resoluteness reflected on his face.

The Bolshevik regime banned religious art. After the revolution Nesterov painted mostly portraits and self-portraits. He loved this genre too, but his last picture was a landscape painting named Autumn in a Village. In his last years, Nesterov also worked on a book of memoirs, which was published several months before his death.

Nesterov died in 1942, and was buried at the Novodevichy Cemetery in Moscow.