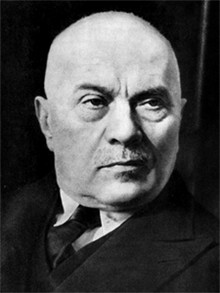 Every person who comes to the Red Square in the heart of Moscow can see the work of Aleksey Shchusev - the Lenin Mausoleum, one of the unique pieces of architecture of the 1920s. Throughout his life Shchusev was regarded as a man who blended the architectural traditions of Tsarist Russia with the monumental style enjoyed by Joseph Stalin.

Aleksey Viktorovich Shchusev was born in 1873 in the city of Chisinau (now the capital of Moldova). His family was quite extravagant. Aleksey’s father, Viktor Petrovich, was a small clerk in city hall. He was famous in Chisinau for his ability to dress well and serve the public good. He was especially active in the process of building schools and hospitals in the area. Aleksey’s mother was more than twice as young as Viktor Petrovich when they married. She came from a highly educated family of art connoisseurs. Therefore, the education of all four children in the family was always a priority for the Shchusevs.

From his early years Aleksey showed a talent for art. According to Shchusev himself, with each of his childhood drawings he was trying hard to make one more step to better understanding of the world. In 1891, at the age of 18, Aleksey moved to St. Petersburg to study at the Imperial Academy of Arts under the guidance of the prominent Russian masters of that time – Ilya Repin and Leon Benua. During his first years at the academy Aleksey realized that the fight for survival in a big city was tough. Shchusev tried all possible ways to reveal his talent. His fellow students considered some of his actions quite extravagant. In 1895 Aleksey learned about the death of the famous general Dmitry Shubin. The next day Shchusev brought the general’s widow a finished sketch of a tombstone, although he had never met her or her late husband before. But he managed to convince her to give this work to him. The monument was erected in the form of a small square chapel under a tent.

A year later Schusev began to work on his final academy project called the “Nobility Estate.” Aleksey made a sketch of a mansion fashioned in a mixture of the French Renaissance and Moscow cathedrals of the 17th century. This work earned him a Big Gold Graduation Medal and the right to study abroad. But Aleksey made another extravagant move – he decided to go to a remote part of the Russian Empire - Central Asia. There he spent some time studying the Mausoleum of Tamerlan – the ruler of Central Asia during the 14th century. Shchusev was very glad to have gone there – he managed to collect many patterns and ideas that would help him in his future work. One year later, in 1898, Shchusev set off on his first European tour.

Upon his return Aleksey organized an exhibition of the sketches he had made during his trip. Some of his former fellow-students joked that “he was the best artist among the architects and the best architect among the artists.” But in reality it meant he was just a beginner. So again, he had to think of ways to survive. From that moment Aleksey decided to play big - he was not interested in building houses for wealthy merchants in his native Chisinau. He wanted to become famous in the capital. So he rented a small flat in St. Petersburg and began to assist his teachers in their practical work.

In 1902 Count Olsufyev, on the recommendation of Benua, placed an order with Shchusev to decorate the facade of his building in the very center of St. Petersburg. The work was done in a relatively short time – from then on the “Shchusev facades” became one of the landmarks of the city because of their simplicity translated in elaborate lines. Upon the completion of the project Count Olsufyev was beside himself with admiration.

Even after his first successes Shchusev continued to explore the experience of the past – he was a diligent student of Old Russian art. In June 1904 he went to carry out the restoration of the 12th century St. Basil Church in the city of Ovruch in modern Ukraine. The building was in a disastrous state. Shchusev decided to blend all his early ideas of twin towers into one project – Aleksey Viktorovich demonstrated his intuition at full swing and the project brought him great public acclaim.

Upon his return to St. Petersburg Shchusev became one of the most requested architects in the city. He successfully combined his work for the nobility with huge public projects. In some of these projects he continued to use ideas he derived from the Muscovite architecture of the 15th century. Today they can be clearly seen in the design of the Trinity Cathedral in Pochayiv Lavra in Ukraine and also at the memorial church at the Kulikovo Field, the place where the troops of Ancient Rus defeated the Tatar cavalry. In 1908 the Russian Emperor Nicholas II commissioned Shchusev to design a cathedral for the Marfo-Mariinsky Convent in Moscow. During four years of work Aleksey Viktorovich managed to implement many elements of the charming medieval style, which was used in the Novgorod Republic in the northwest of Ancient Rus at the beginning of the 11th century. The cathedral was successfully completed in 1912. 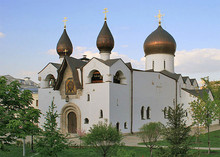 A year later Shchusev won the tender for the design of a new railway station in Moscow – the Kazanky terminal was planned to become the starting point of the journey along  the Trans-Siberian railway – through the city of Kazan, the Ural Mountains and Siberia to the Far Eastern port of Vladivostok. Critics admired the project, which became a fusion of many successful elements that belong to the different epochs and styles. Shchusev managed to blend Revivalist trends of Imperial Russia, elements of the Kremlin towers and ancient Tatar architectural features. The whole project was done in the Art Nouveau style, which was extremely popular in Russia at the beginning of the 20th century. However, the project was only completed in 1940 – long after the 1917 Bolshevik Revolution in Russia.

The new Bolshevik government asked Shchusev to take part in the design of the Moscow reconstruction plan. At that time Aleksey Viktorovich made a switch from Neo-classicism to Constructivism – the blend of grandeur square forms in huge buildings - which explains why many of the houses built in 1920s had this “Constructivist” look.

In 1924 after the death of Vladimir Lenin, Shchusev was asked to develop the concept of the mausoleum for the “Chief of the International Proletariat” in three days. With the help of many prominent Russian architects, Aleksey Viktorovich decided to employ a simple and expressive design in the form of squares and cubes. According to Shchusev, this would manifest both the grief of the people and the power of Lenin’s “eternal teachings.” At first the mausoleum was made of wood, but in the1930s it was restructured with the use of dark red granite and black labradorite. On top of the mausoleum Shchusev designed a tribune – during national festivities it became the platform from where Soviet leaders could watch the passing columns of demonstrators and military parades.

Apart from these “new architectural concepts” Shchusev continued to demonstrate his infatuation with ancient Russian art. In 1925 he was asked to take part in the restoration of the New Jerusalem Monastery in Istra, near Moscow.

After the completion of the Lenin Mausoleum, the Soviet leadership cherished Shchusev for what he had done. In 1926, he was nominated Director of the Tretyakov Gallery, the most valued and famed national collection of art in the center of Moscow. He also headed a group that designed major bridges and apartment complexes around Moscow. In 1932 Aleksey Viktorovich was asked to supervise the construction of the Moskva Hotel, right next to the Red Square. According to eyewitnesses, Shchusev made two sketches of the future building: one was with square windows and the other – with rounded ones. Aleksey Viktorovich and his team were stunned when they learned that Stalin approved of both sketches. They did not know what to do – at that time it was very easy to be put to jail for disobedience to the authorities. So Shchusev, according to his colleagues, came up with an idea to blend the two designs together.

Shchusev supervised the construction of all the important projects in the country – the construction of the NKVD headquarters on Lubyanka Square, widely known as the KGB building, in 1937 and the design of the Komsomolskaya metro station right under the Kazansky railway station. Shchusev was the first to come up with the idea for the creation of the seven Gothic skyscrapers around Moscow that are sometimes called the “Seven Sisters.”

Aleksey Viktorovich also designed numerous governmental buildings and theaters in the capitals of other Soviet republics – in Tbilisi and Tashkent (now the capitals of Georgia and Uzbekistan respectively). In these works he successfully managed to blend elements of Neoclassicism with national architectural traditions. This feature became another “trademark of Shchusev.” Aleksey Viktorovich became the recipient of the Order of Lenin and four Stalin Prizes in 1941, 1946, 1948 and posthumously in 1952.

In 1946, Shchusev established the Museum of Architecture – it was an attempt to preserve the remnants of demolished medieval churches and monasteries. He also supervised the revival of the Novgorod Kremlin, which was destroyed by the Nazis during WWII. For Aleksey Viktorovich the work was very important – the Kremlin had been a source for ideas at the start of his career.

Shchusev died in 1949 at the age of 75. He was buried at the Novodevychye Cemetery – a resting place for many prominent figures of Russia and the USSR. After the collapse of the USSR there have been many attempts to question the role of Shchusev in Soviet architecture. Many of his critics blame him for making Moscow a “dull place of grey buildings.” In 2004 the Moscow city government tore down the Moskva Hotel and built a renovated version in its place. However, all the features of Shchusev’s design were preserved.